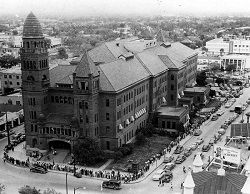 Bexar County’s Romanesque Revival courthouse was designed by J. Riely Gordon, and completed in 1896. This building is the fourth courthouse structure built for Bexar County in San Antonio since the 1740s. It remains one of the largest historic courthouses in Texas, a Recorded Texas Historic Landmark, State Antiquities Landmark, and is listed in the National Register of Historic Places.

Since its construction, the courthouse has undergone several major remodels which obscured or damaged much of the original design. Over time, groundwater damage caused significant deterioration to the building’s foundations. The courthouse has been the recipient of grants through the THCPP program, helping to restore the exterior stone and terra cotta, cleaning, repairing water damage, and the demolition of several of the 20th century additions. The restored outdoor terrace serves as a new entrance space between the courthouse and the Civil Courts building. Interior work includes the restoration of the original two-story courtroom and its coffered ceilings, gilded plaster moldings and capitals, and decorative windows that allude the rose window at San Antonio’s Mission San José.

In addition to this historic preservation work, accessibility and security updates have been made, implementing accessible entrances, exit stairs, fire safety measures, and new electrical, mechanical and plumbing systems.