2017 felt like a rollercoaster ride for many people, and it was no exception for the THC. We experienced many highs and lows—from a new addition to our growing family of state historic sites to sustaining hurricane damage to several of those sites.

Despite the extreme ups and downs, there was plenty of the day-in, day-out routine—which happens to be very rewarding in our line of work. As every year, there were hundreds of preservation projects reviewed, dozens of new historical markers approved and placed, numerous grants, awards, and designations given, and countless volunteer hours contributed by individuals who care about preserving the historical treasures of the Lone Star State.

It was a very busy year at the THC, but these were some of our most significant moments.

In January, the Houston Astrodome was designated by the Texas Historical Commission as a State Antiquities Landmark (SAL). Dubbed the "Eighth Wonder of the World” when completed in 1965, the Astrodome (officially the Harris County Domed Stadium) was the first enclosed and air-conditioned sports stadium in the U.S. In addition to being the longtime home of the Houston Astros baseball team and Houston Oilers football team, it hosted many marquee events, including Elvis Presley concerts, Muhammed Ali boxing matches, Evel Knievel stunts, and the 1970s “Battle of the Sexes” tennis match between Billie Jean King and Bobby Riggs. The Astrodome joins other SAL-designated sites such as the Alamo, the State Capitol, the Cotton Bowl, and many other iconic Texas landmarks. 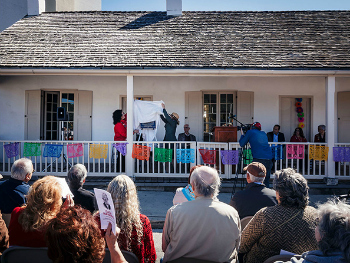 That same month, we celebrated another major designation: The National Park Service designated our Casa Navarro State Historic Site in San Antonio as a National Historic Landmark (NHL). These landmarks are designated by the Secretary of the Interior because they possess extraordinary value and illustrate the heritage of the U.S. in history, architecture, archeology, engineering, and culture. There are only 46 other NHLs in Texas. On February 25, we celebrated that prestigious designation at the annual birthday celebration for site namesake José Antonio Navarro.

Some of our other state historic sites received designations this year. Eisenhower Birthplace in Denison and Fannin Battleground near Goliad were designated as SALs, following listings in the National Register of Historic Places in 2016 and 2017, respectively.

In the spring, we hosted two events at the State Capitol in order to launch new mobile tours. In March, we celebrated the 150th anniversary of the Chisholm Trail with a new mobile tour exploring the famous cattle trail’s Texas legacy. The event featured authentic food from two chuck wagons, musical performances, trick roping, and living history. 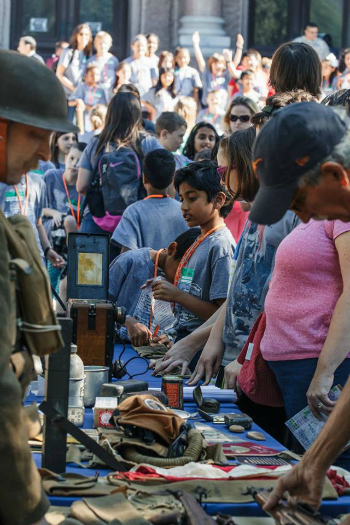 On April 6, 2017, the 100th anniversary of the U.S. entry into World War I, we commemorated the occasion with the launch of our “World War I: Texas and the Great War” mobile tour. That event featured period military equipment and living historians from the Texas Military Forces Museum Living History Detachment, a color guard from Camp Mabry, and singer from the Texas Military Department, 36th Infantry Division Band.

May (Preservation Month) was an extremely busy month for us. It began on the first day of the month with a historical marker dedication in Marshall for James Farmer. Known as one of the “Big Four” in the civil rights movement (along with Martin Luther King, Jr., Whitney Young, and Roy Wilkins), Farmer co-founded and led the Congress of Racial Equality (CORE); helped organize and lead the “Freedom Riders;” and later was awarded the Presidential Medal of Freedom. His activism was rooted in his hometown of Marshall, where he grew up during segregation and made a name for himself at Wiley College as one of the “Great Debaters.” Hank Thomas, the last surviving Freedom Rider, presented the keynote address at the dedication ceremony.

Later that month, we were once again joined by Cecilia Abbott on the annual First Lady’s Main Street Tour, which visits new communities in our Texas Main Street Program. This year, Abbott welcomed Buda and Linden into the statewide historic downtown revitalization program. We also held another Celebrate Main Street Sweepstakes in May, featuring a weekend getaway to the Main Street city of Harlingen.

Also in May, we launched DowntownTx.org, a new online building inventory featuring historic property listings. Developed by our Town Square Initiative as a response to the challenge of vacant and underutilized properties, the website is changing how people connect with historic buildings, serving both as a matchmaking tool with a real estate interface that showcases the community and its unique characteristics, as well as an inventory tool for local program managers. The website launch coincided with 12 “Imagine the Possibilities” tours in cities across the state. The tours showcased available downtown properties to engage people who have imagined running a business, owning a building, or living downtown. 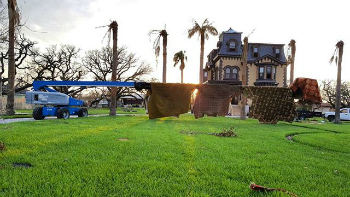 In late August, Hurricane Harvey hit. Thankfully, none of our staff were injured and no state historic site was destroyed, but several sites took damage. Fulton Mansion State Historic Site took a direct hit when the storm made landfall in Rockport. The roof crumpled and chimneys were destroyed, causing water to pour in and damage some of the collections and sheetrock. A few of the windows broke and trees fell on the grounds. The site remains closed indefinitely during repairs.

Other THC state historic sites that were impacted along the Gulf Coast were Fannin Battleground, Varner-Hogg Plantation, Levi Jordan Plantation, San Felipe de Austin, and Sabine Pass Battleground. Hurricane Harvey caused unbelievable devastation in the region, and our agency is very much involved in the recovery efforts and will be for years to come.

During the aftermath of the hurricane, at the same time that we were attempting to assess the damage to our sites, we added a new one to the mix. The French Legation was officially transferred to the THC on September 1, becoming the 22nd THC state historic site. Constructed by the French government during the Republic of Texas era, the French Legation stands today as one of the oldest buildings in Austin and witness to generations of growth and change in Texas. It is currently closed to the public for much-needed stabilization and restoration work.

On September 23, the 100th marker in our Undertold Marker Program was dedicated in Bastrop. It commemorates the Mina Ward School, the former school for Mexican Americans during the time of segregation. The school was closed in 1948 after the landmark Delgado v. Bastrop ISD case, which resulted in the integration of Hispanic students into white schools.

New print publications we produced this year included The Chisholm Trail: Exploring the Folklore and Legacy and Texas and the Great War history/travel guides, in addition to our Courthouse Cornerstones and Historic Heights program updates and four more issues of our quarterly magazine, The Medallion.

THANKS! Can't wait to see a bit of HISTORY abt our GREAT CITY OF FORT WORTH. Awaiting the receipt of our TERRELL HEIGHTS HISTORIC MARKER to be placed and too see it being PLANTED n a neighborhood that seems to GO UN-NOTICED. The rich history of this NEIGHBORHOOD/COMMUNITY will be remembered by all when it is finished & dedicated . . . P E A C E! Signed by Sarah Walker, Board President TARRANT COUNTY BLACK HISTORICAL AND GENEALOGICAL SOCIETY, INC., Fort Worth TX

Thanks for sharing an information. Thanks for the review for last year.