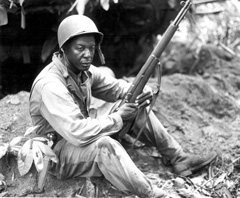 167,000 African Americans served in the Navy, initially as mess attendants and cooks. They were also assigned duties as gun crews. In 1942, general service was opened for African Americans to serve in other capacities. In March 1944, the first 13 African American naval officers were commissioned. One of the first heroes of the war was Ship’s Cook Third Class Doris Miller, from Waco, aboard the USS West Virginia at Pearl Harbor on December 7, 1941. His Navy Cross citation reads in part:

“...distinguished devotion to duty, extraordinary courage and disregard of his personal safety during the attack on the Fleet in Pearl Harbor on 7 December 1941. While at the side of his Captain on the bridge, Miller despite enemy strafing and bombing, and in the face of serious fire, assisted in moving his Captain, who had been mortally wounded, to a place of greater safety and later manned and operated a machine gun until ordered to leave the bridge.” 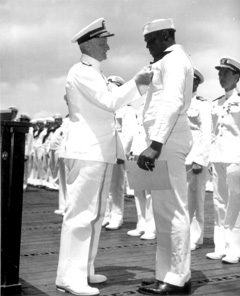 He was awarded the Navy Cross by Admiral Chester W. Nimitz, from Fredericksburg.  Unfortunately, Doris Miller was killed in action when the USS Liscome Bay was sunk in November 1943 during operations in the Gilbert Islands.

The first ship named for an African American was the USS Harmon (DE-678) in honor of Mess Attendant Leonard Roy Harmon of Refugio, Texas. Harmon was posthumously awarded the Navy Cross for his actions aboard the USS San Francisco during the Battle of Guadalcanal.

909,000 African Americans served in the Army, and 78 percent of them served in service branches (engineer, quartermaster, and transportation). The African American combat units in the Pacific included the 93rd Infantry Division, the 24th Infantry Regiment (one of the original Buffalo Soldier regiments), 10 anti-aircraft battalions, and one coast artillery battalion. In the China-Burma-India Theater, 60 percent of the engineer units that built the Ledo Road from India to the connection with the Burma Road were African Americans. 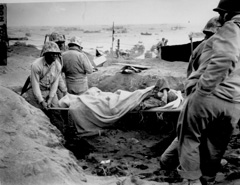 17,000 African Americans served in the Marine Corps during the war, the majority as support troops in ammunition and depot companies. On Peleliu, some of these support troops took up rifles and assisted the 1st Marine Division with fighting on the island. Approximately 800 African Americans served on Iwo Jima, bringing up ammunition and supplies as well as evacuating wounded. The only two African American combat units formed by the Marine Corps were the 51st and 52nd Defense Battalions, which garrisoned captured islands. 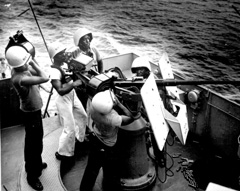 George Watson, U.S. Army, was the only African American to be awarded the Medal of Honor in the Pacific during World War II. His unit was aboard a ship that was torpedoed on March 8, 1943. Following the sinking of the ship, Watson repeatedly swam away from the life raft to save other men and bring them back to the raft, until one time he swam away and never came back. 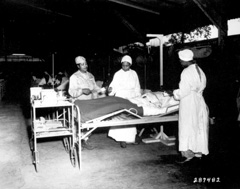 African American women volunteered in large numbers. Many served as nurses in the both the Army and Navy Nurse Corps. Others served in all branches of the armed forces. On the home front, women worked in factories building ships, tanks, and airplanes; others supported war bond drives, raised victory gardens, and assisted with scrap drives.

Although there were no famous units like the Tuskegee Airmen in the Pacific theater, the African Americans serving in the Pacific performed their duty just as proudly as their fellow countrymen in the European theater.

For more about the Pacific theater and the part played by all Americans in that conflict, visit the National Museum of the Pacific War in Fredericksburg, a property of the Texas Historical Commission managed by the Admiral Nimitz Foundation. The site is part of the Texas Hill Country Trail Region.

My dad was an airplane diesel mech, sharpshooter and Golden Globe boxer in Pacific Theatre. He was from Tyrrell, Ark. Aka Tommy Ryan.

I'm on a major mission to find evidence of African American presence during WW2 in NZ when NZ had its first American encounter on such a significant national scale. I am frustrated that the only media sources I've come across so far only show white Americans but the promptings of wanting to know more have been nagging me for months and I've finally taken on the mission to find out. If your dad served in NZ during this time, please contact me :-).

I am researching a biography on the Australian Kittyhawk pilot Leonard (Len) Victor Waters, an Indigenous Australian who flew with 78 Squadron Royal Australian Air Force in the South-West Pacific in WW2. During his time on Morotai in 1945 he won the South West Pacific Middleweight title against an American serviceman. Does anybody have details of this event and who his opponent was? Friday fight nights at Morotai stadium were a big deal, with several thousand Australian and American servicemen attending. I'm keen to get accounts of these nights.

I'm trying to find out whether the Red Tails fought in the Pacific Theatre?