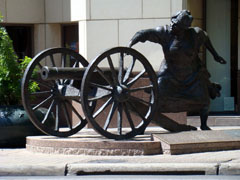 On March 29, 1836, the town of San Felipe—the capital of Stephen F. Austin's colony and now the location of our San Felipe de Austin State Historic Site—was burned to the ground to keep it from being captured by the advancing Mexican Army.

Among the San Felipe residents who witnessed the burning before fleeing eastward as part of the Runaway Scrape was Angelina (Peyton) Eberly. Several years later while living in Austin, she would again make her mark on history in a unique episode of the Republic of Texas era.

In honor of Women’s History Month, we take a closer look at the fascinating and full life of this pioneering Texas spirit.

Angelina Belle Peyton was born in 1798 in Tennessee. On her 20th birthday, she married her first cousin Jonathan Peyton, and soon after, the newlyweds headed for New Orleans. There are indications they then considered moving to the Caribbean, but they ultimately left New Orleans in 1822 aboard the Good Intent—destined for Texas.

By 1825, the couple had opened an inn and tavern near Commerce Square in San Felipe de Austin. The business was known as Peytons Tavern. Jonathan Peyton would claim his place among Austin’s original settlers—the Old 300—receiving title to his Matagorda land claim in August 1827. 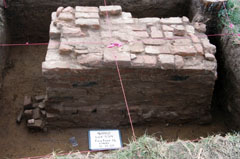 The Peytons, their three children, and several enslaved African Americans managed the inn and tavern that served San Felipe visitors and residents. William B. Travis often took meals at the tavern, located just a short walk from his San Felipe law office.

Jonathan Peyton died in 1834, leaving Angelina and his children to face the challenges of revolution and the Runaway Scrape on their own. In the early 1840s, Angelina Peyton was interviewed by Stephen F. Austin’s cousin, Mary Austin Holley. Her accounts of Austin’s colonial capital (part of the collection of the Dolph Briscoe Center for American History) offer important insights into the town and its residents, and clearly establish her as one of the town’s more prominent citizens.

She recalled the renovations to Austin’s first log cabin home, located near her tavern. She noted that Austin’s brother, J.E.B. Austin (known as Brown), oversaw the efforts to improve the home, describing it as “…one story half frame and half log—wide passage between.” 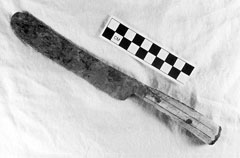 In 1836, when the steady march of war would bring destruction to San Felipe, Angelina Peyton played a role in the town’s military history. At the end of February 1836, the women of San Felipe presented the local militia, under Captain Moseley Baker, with a flag.

In early March, Nicolas Labadie traveled through San Felipe with volunteers from Liberty. He recalled the town giving them a big send-off, noting, “Captain Norton from New York made us a big talk, and was followed by complimentary speeches from some others, as we were paraded opposite Mrs. Peyton’s public house; and our appearance being rather imposing, all concluded we would do good service.

Mrs. Peyton having gathered around her as many of her sex as she could, they all presented themselves in her gallery, where they gave us repeated cheers, waving their handkerchiefs incessantly as we left.”

On March 12th, the night that news of the fall of the Alamo reached San Felipe, the wife of one of the slain defenders was boarding at Mrs. Peyton’s inn. Despite early optimistic reports from Captain Baker that the Mexican army would be engaged near the Colorado River and likely “whipped by to-day,” General Sam Houston and his army arrived at San Felipe on March 28th and encamped on the outskirts of town.

Dissatisfied with Houston’s decision to continue his retreat, Captain Baker and Captain Wyly Martin of Fort Bend refused to abandon the civilians living near the Brazos River. Baker oversaw the evacuation of San Felipe and let his men know that he had been ordered to burn the town on sight of the advancing Mexican army (General Houston would deny giving this order, a source of conflict between the two men for the remainder of their lives). 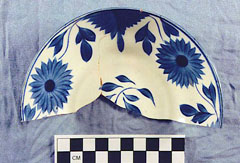 In her interview with Mary Austin Holley, Angelina Peyton describes the fateful final hours at San Felipe: (Captain Baker approached her) “…with a long face—get ready [he said] I have orders from Houston to cross the families over the river that they may make their way as best can to the United States. And what commotion and destruction of property followed. Much was left on the river banks. There were no wagons hardly, they had been used for the army. Few horses many had to go on foot the mud up to their knees—women and children pell mell. I was the last to cross. We went out of our houses with only provisions, and a bed, or so, I gave to the army my rice, sugar and other groceries, suffered them to kill my hogs and eat my bacon…I got over late—was all night on the river bank, I said to Captain Baker, as I cast a longing, lingering look on my deserted home, don’t burn the town all I have is there.”

Baker recalled this discussion with Angelina Peyton as well: “I remained on the western side until I had seen every family in San Filipe across the river, the last being Mrs. Peyton…whose undaunted firmness inspired many a family with confidence.” Baker added, with a pointed barb for Houston, “…and whose (Mrs. Peyton’s) spirits had you (Sam Houston) possessed then, no Mexican force would have revelled in San Filipe.”

In the evening on March 29th, Texian scouts mistakenly reported sighting the Mexican advance guard. Sometime after 8 p.m., militia soldiers began the sad task of putting San Felipe’s buildings to the torch. By midnight, the town was practically reduced to ashes. Angelina had made it to an encampment four miles east of town, and reported hearing “…the popping of spirits, powder &c [etc.] in our burning homes.” She feared “…the Mexicans had indeed come upon the town [and] soon would…be upon us.” Later many of the soldiers who burned the town lamented to her that “…all hated to burn my home where they had eaten so many good meals—fired the corners and it caught from there.” 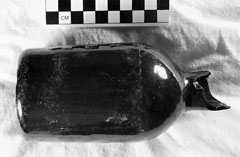 When the victory at San Jacinto offered a bright new day after the harrowing dark of the Runaway Scrape, Angelina Peyton moved to Columbia—the first capital of the Republic. There her former neighbor Stephen F. Austin would join President Sam Houston as the new nation’s first Secretary of State, though only for a few months before his untimely death at the end of 1836. Angelina would find a new husband, the widower Jacob Eberly.

Her second husband died in 1841, and the following year Angelina Eberly participated in the strange “Archive War.” Recognizing that government documents were being loaded for removal from Austin (an effort by President Houston to functionally relocate the government), Angelina Eberly fired off a grapeshot load from a cannon staged downtown, effectively alerting her fellow residents to the attempted heist. For her efforts, Mrs. Eberly is commemorated in a bronze sculpture by artist Pat Oliphant, located on the northwest corner of the intersection of 6th Street and Congress Avenue, just south of the capitol.

Angelina Eberly moved to Lavaca (Port Lavaca today) on the Texas Gulf Coast in 1846 and leased a tavern house there. By 1851 she had opened a hotel at Indianola. She died there in 1860. As we celebrate Women’s History month in March, Angelina Peyton/Eberly serves as a shining example of the early Lone Star spirit that helped forge the Texas of today.