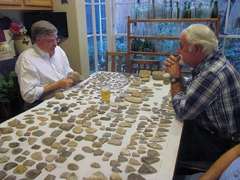 As one of the oldest regional archeological societies in the state—established in 1959—the Houston Archeological Society (HAS) has seen a constant ebb and flow in membership through the years. But the organization is currently experiencing a true renaissance.

With a strong core of members devoted to keeping the organization alive, its renewal is the result of a group effort. But at the center, one individual serves as the spark that has ignited a whirlwind of activity within the society. Linda Gorski, former public relations specialist for the historic George Ranch in Richmond, Texas, and current president of HAS, has put the organization back on the map in a big way.

Five years ago, HAS was on the verge of disappearing—membership was down to 39, and attendance at meetings was often only a dozen people. There were no ongoing archeological investigations, and almost all the meeting presentations were about international topics with no focus on Texas archeology. Then Linda Gorski came onboard.

First she assembled a leadership team as passionate about archeology as she is. Then she expanded the team to start pulling in new talent, while keeping the society’s valued old guard part of the group’s core.

“I cannot emphasize enough how important our long-time members are to the Houston Archeological Society,” Gorski said, adding that veteran members like Beth and Pat Aucoin attend every project and participate in most of the public outreach programs to mentor, teach, and share their experiences with the newer members. “It’s like offering an Archeology 101 class to new folks at every project. The benefit of their experience and their willingness to work alongside new members enables us to immerse the ‘newbies’ in projects right away.” 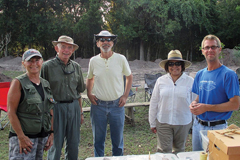 Key to Gorski’s initial leadership was identifying and recruiting people who were dedicated to archeology and able to share their passion with the other society members. Gorski also realized that not everyone is interested in all aspects of archeology, so she drew on the various skills and talents of the membership and allowed everyone a place at the table.

Gorski completely revamped the monthly meetings, bringing in top-rated speakers from across the state to discuss a range of subjects, from “Peopling of the Americas” to “Historic Archeology.” Importantly, the meetings’ focus returned to Texas archeology, and the interest in local prehistory is drawing new people. Meetings are advertised across Houston, and many times Gorski has arranged for the Houston Chronicle to interview participating speakers.

“We noticed that when we offered a Texas-centric or Houston-centric program, the publicity we received from local media was much more comprehensive and, thus, our attendance was way up,” Gorski explained. “Fortunately, we have several members, most notably Houston historian Louis Aulbach, who keep us linked into the local historical and archeological community, which enables us to seek programs that are timely and interesting. ”

Currently, Gorski is working tirelessly to include the organization in local archeological projects. HAS members may do the work themselves—such as at the newly discovered Timber Fawn Clovis site in Harris County—or they might partner with professional projects taking place in the area.

The Dimond Knoll project in northwestern Harris County is a prime example of what a local society can do to aid and assist professional archeologists. In 2013, Gorski partnered with the Houston district office of the Texas Department of Transportation (TxDOT). She was approached by TxDOT’s Dr. Jason Barrett with the idea of HAS screening more than 50 dump truck loads of dirt from the upper level of the Dimond Knoll site, a robust Late Archaic occupation dating to circa 2500 B.C.

The soil had been mechanically removed from the site, after about 40 percent of the site was hand excavated. This allowed archeologists to expose the underlying, extremely important Paleo-Indian component deeply buried there.

Undaunted by its sheer magnitude, HAS tackled the Dimond Knoll project with military-like rigor. The members’ efforts resulted in recovering and cataloging hundreds of artifacts. The screening project nearly doubled the number of chipped stone tools recovered during the hand excavations at the site.

While the approach was somewhat unusual for TxDOT archeologists, the opportunity proved to be a win-win for TxDOT and HAS. TxDOT was able to investigate a larger portion of the site, and HAS received an interesting project that kept its membership active in the field for almost a year. 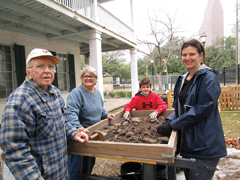 Working closely with HAS volunteers, Barrett proved the perfect mentor for the project. Almost weekly, HAS members gathered around Gorski’s kitchen table to watch, listen, and participate as Dr. Barrett identified the stone tools that were recovered through the screening effort.

“Our partnership with TxDOT on the Dimond Knoll screening project cannot be overstated,” Gorski said. “Membership in HAS nearly tripled during the course of the project thanks to the public outreach opportunities it offered and the publicity it generated.”

According to Gorski, the Dimond Knoll project promoted an awareness of archeology that was unprecedented in Houston and Harris County. Every weekend, in addition to HAS members, the project drew school children, college students, Scout troops, and members and staff from the Houston Museum of Natural Science.

“Many of these folks joined HAS on the spot and remain active members today,” Gorski said. “Dr. Barrett’s participation and commitment to the project was key to its success. He was at the site working with us every single weekend and holiday for an entire year, and he willingly gave up several evenings a month to teach us how to identify recovered lithics.”

All HAS events are now well publicized, both to the membership and the greater Houston community. Attendance at HAS events is larger than ever and continues to grow. Gorski also initiated a revamp of the organization’s website (txhas.org), and now every publication the HAS produced since its founding is online and free to the public. In addition, Gorski never misses a chance to help at school events, San Jacinto Day celebrations, and other historical activities in the Houston area.

As a result, HAS membership has swelled from 39 to about 180. Monthly meetings regularly draw up to 70 people, and sometimes reach more than 100.

“Their enthusiasm is contagious,” says Pat Mercado-Allinger, director of the THC’s Archeology Division. “While the rebirth of the society has truly been a team effort, that team is led by a very special lady who keeps the membership both active and extremely engaged.”

Linda is fun to work with. Great lady.