Since 1997, historians, preservationists, archeologists, students, and members of the public have celebrated Texas Archeology Month annually in October. The Texas Historical Commission, in association with the Texas Archeological Society and the Council of Texas Archeologists, have dedicated the month to expanding public awareness and engaging the community in matters of archeological, cultural, and historical significance within the state of Texas. The Sam Rayburn House Museum took part this past fall with an Archeology Open House and exhibit of cultural materials excavated from the Rayburn farm in 1977.

The Sam Rayburn House Museum opened as a public house museum in 1975. Just two years later, archeologist Warren M. Lynn completed an archeological investigation of the site. To determine areas where items might be uncovered, Lynn used oral histories, photos, and visual surveys. He completed excavations of several locations on the museum property. The investigation uncovered items relating to the history of farming such as pieces from a plow, tractor, windmill, and an old butter churn. Other excavations pointed to former structures and fences that were once on the property and areas where items had been burned or stumps removed. One area included materials relating specifically to an African American family, likely that of Charlie Phillips, who worked as the Rayburn’s caretaker and lived on the property during the 1930s and 1940s.

The materials displayed at the Sam Rayburn House Museum during Texas Archeology Month included cosmetics containers such as a lipstick case and rouge compact with a bit of bright pink color still remaining inside. This excavation also unearthed a pair of wire-rimmed glasses and remnants of a pair of pince-nez glasses. A gold barrette with a chain was also discovered. The chain would have attached the barrette in the owner’s hair to the side of the pince-nez glasses. The chain kept the glasses near at hand to the user. 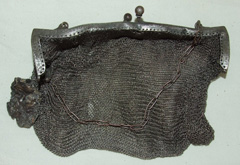 Other items on display included jewelry fragments such as a cut glass bead necklace, a pendant, and earring remnants. A metal chainmail handbag made by Whiting-Davis, popular with flappers in the 1920s, was part of the archeological discovery. One of the more intriguing items is a small, metal, oval-shaped identification tag. The tag was used by a customer who had a charge account at the A. Harris and Co. department store in Dallas. The store discontinued use of the tags in 1940. A smoking jacket hanging in Sam Rayburn’s closet bears a label denoting it was from the A. Harris and Co. store. 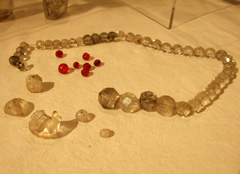 The items displayed all relate to a woman’s dressing table or medicine chest from the early- to mid-20th century. It was concluded that these items may have all been thrown away after the death of the original owner because they are of varying ages, but were all found in the same accumulation. The items may have belonged to Rayburn’s mother Martha Rayburn, or his sisters Lucinda Rayburn and Medibel Bartley, who each were living in the home at the time of their respective deaths.