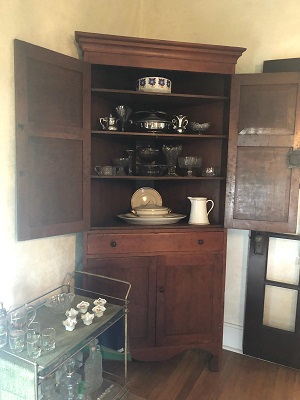 One frustrating part of history is the amount of conflicting points of view and narratives. Fortunately, modern material artifacts typically do not have this problem. The Sam Rayburn House State Historic Site is very fortunate that many of the artifacts in the collection have one origin point.

However, the cherry wood cabinet in the northeast corner of the dining room does not have this benefit. It might also be the oldest item in the collection. Go figure.

The Sam Rayburn House has four different origin stories for this piece. The most common story (and the one we go with) is that the Rayburns brought it from Tennessee, and it is from the Waller family, Mr. Sam’s maternal line.

Additionally, there is a story that it was given by Minnie Eldridge, a close family member to the Rayburns from Tennessee. Furthermore, it might have been bought in Tennessee independently by Mr. Sam and shipped to Bonham. The fourth story on file is from Robert Bartley, son of Medibel (Rayburn) Bartley, who claims Mr. Sam bought it in 1949 or 1950 from an estate sale in Washington, D.C. In any case, it ended up in Sam Rayburn’s possession.

This cabinet has engineering quirks put there on purpose for increased usability. The legs of the cabinet are cut at a specific angle, and the back leg is shorter than the front two, which makes it lean against the wall, so if anything falls, it falls backwards into the cabinet rather than forward. It is also built as a trapezoid, which helps it fit snuggly into a corner. It has square nails, handmade locks, and irregular planing.

The square nails are dated to around 1810. These square nails were cut by rotating the piece of metal and cutting it from all four sides. This makes it a wedge tip, making it stronger.

Modern nails started being mass produced about 1880. They are weaker due to how they are made, ending in a point. Today, square-cut nails are still used, but in very specific circumstances.

Both the top and bottom doors of the cabinet lock with a surface-mount lock. This style of lock is screwed into the back of the item, no cutting into the wood needed. Surface-mount locks are a type of cylinder lock, but the simplest variant. 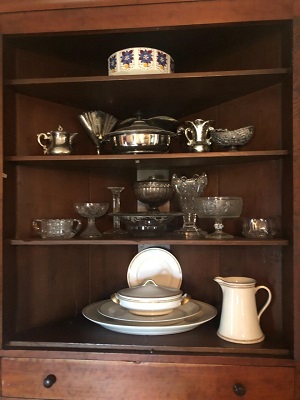 The front of the key engages with a singular pin and rotates around that. Then the notch of the key pushes a block of metal either forward or backward. A modern-day deadbolt works in a similar way. While modern locks are based on cylinder locks, the use of cylinder locks started to fade in the 1960s, especially for house doors.

The style of the cabinet is probably from the late Classical era. These corner cabinets fit comfortably into this time period, mostly being made from 1725-1820. The upper part is used for display and the lower for storage (as the site has it arranged).

This cabinet specifically has irregular planing, referring to the way the wood was smoothed down. Because of this irregularity we know this was handmade. Lastly, on the interior of the right door, there are small holes in the finish. This is due to an uneven and overworked coating. Small bubbles formed when the piece was being finished and when they popped, they left the small holes.

Currently, the piece holds ceramic, chrome-plated, and glass dishware from the Rayburns. The ceramic at the top is a singular piece; it seems to be painted and is just a standard ceramic baking dish. The chrome-plated and glass pieces were molded with floral designs. The last set of ceramic dishware has gold and red detailing around the edges. Although we may not know for sure what was kept in the cabinet, the Rayburns probably would have used the cabinet for similar items to those on display.

I became interested in this piece because of a similar piece in my own home and family history. My father’s family originally came from Tennessee, just as the Rayburns did. My great aunt did some digging and found that our cabinet was probably built in Tennessee somewhere between 1830 and 1870.

Because three out of the four origin stories directly tie to Tennessee, and because of the similarities between my family cabinet and the cherry wood corner cabinet, personally I lean more towards the story of bringing it from Tennessee, but only history knows.

Sam Rayburn House State Historic Site, located in the Texas Lakes Trail Region, tells the real story of Sam Rayburn, one of the most powerful and influential politicians of the 20th century, in his authentic 1916 home. Preserved as a period time capsule, the two-story home contains all original Rayburn furnishings.