Artifact Spotlight: An Epergne for the Ages—The Rayburn Family Centerpiece 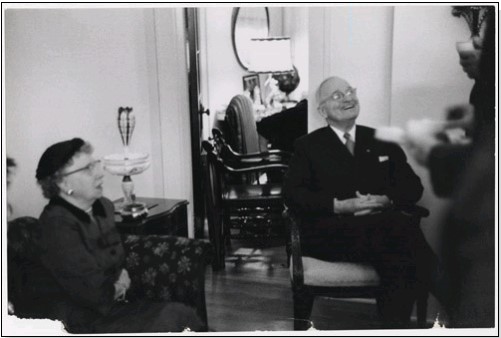 For holidays or special occasions, dining tables may have a centerpiece in the middle of the table to represent the occasion. Hors d’oeuvres, small finger foods, and perhaps some decorative elements might provide the table with looks as well as usefulness before the main meal arrives.

However, some clever person way-back-when asked themselves, “What if you could have a centerpiece that also serves food?” Now you have me today, writing about the epergne that sits on top of the china cabinet in the dining room of the Sam Rayburn House State Historic Site.

An epergne (pronounced i-pәrn or eh-pern) is a centerpiece that could display multiple decorative or food objects at one time. Depending on the epergne’s construction, it could have a place for candles, flowers, candies or nuts, vinegar, or all of these things at once.

This French creation from the 1600s reached neighboring England during the 1720s, and the middle class gained access to epergnes during the Victorian era (named after the reign of Queen Victoria from 1837 to 1901).

As to the origin of the word “epergne,” it is similar to a French word for the idea of saving, l’épargne, perhaps as a reference to the saving of space on the table or the saving of time for serving food. Originally made from ornate metals like gold or silver, epergnes transitioned to glass and porcelain during the 1800s. With the use of non-metal materials came the more colorful types of epergnes that symbolized flowers, rather than serving merely as a vessel for flowers. 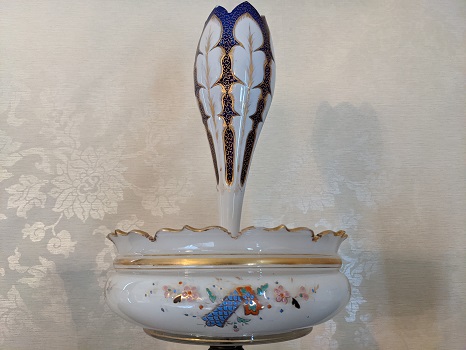 Vastly different styles of epergnes exist, but they do have a basic shape in common. A towering column might contain a channel in which to place flowers or candles. At the base of the column, there might be a bowl or dish for holding liquids or small treats.

Some epergnes have branching pieces that lead to dishes or other designs useful for holding ornamentation of some sort. Whether they resemble a simple glass vase or a complex, silver food carousel, epergnes are obviously a well-crafted piece of home décor.

The Rayburn epergne stands 48 centimeters high by 22 centimeters wide. The top portion is made of blue and white glass with gold painted details, making the design resemble a tulip. This top connects to the center piece with brass machine bolt connectors.

The center is a shallow bowl made of milk glass with a gilt-edge trim and decorative flowers painted on the outside. Holding up the epergne is a clear, cut glass stand. Despite its intended use as a centerpiece, the Rayburns likely moved the item to wherever it was needed.

There is a picture of the epergne on a side table between former First Lady Elizabeth “Bess” Truman and her husband, former President Harry Truman, at what was possibly a reception at the Rayburn home after the dedication of the Sam Rayburn Library in 1957.

Tom and Lula Gooch of Dallas gifted the epergne to Sam and Lucinda “Miss Lou” Rayburn in December 1950. Tom has an elementary school in Dallas named for him. A member of one of the oldest families in Dallas, Gooch ran what became the Dallas Times Herald from 1941 until 1952, the year he died. 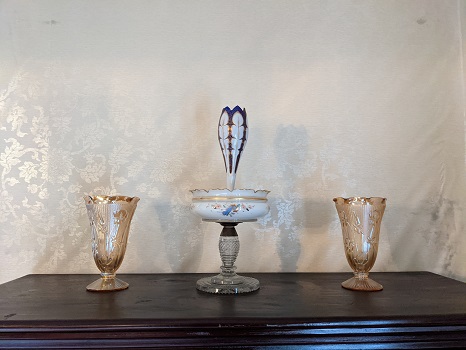 In addition to his newspaper duties, he held prominent positions with the State Fair of Texas, the Dallas Metropolitan Opera, and KRLS radio. Sam Rayburn wrote to the couple, “The beautiful Christmas remembrance you sent me was received. I don’t know what to call it, but Miss Lou does. I do want to say that it is one of the most beautiful, and I might say gorgeous things that it has ever been my privilege to possess. You both always do so many fine and lovely things that there is never a day that I don’t think of you with love and good wishes.”

We do not know when or where this epergne was made, but its quality craftsmanship is obvious to those who see it. The Rayburn family must have felt the same way, since the epergne is in excellent condition for being at least seventy years old. Sam Rayburn did not know what to call the epergne when he got it, but he took care of it and made sure whoever visited his home, then and now, got to see it. Whether you enjoy fancy centerpieces, art, furniture, history, culture, or old homes, the Sam Rayburn House has something to offer.