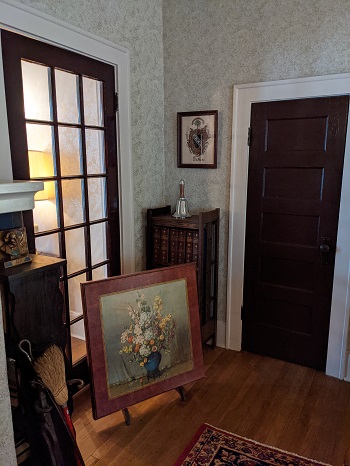 Martha “Mat” Clementine Waller married a man named William Marion Rayburn on May 14, 1868. With that marriage, the Waller became a Rayburn, but what happened to the Waller name? Although Martha didn’t really “lose” her maiden name, she and many other women throughout time who descended from Anglo-Saxon traditions took their husbands' names after marriage and continue to do so today.

More than any of his siblings or his father, Sam Rayburn helped the Rayburn family cement their surname into the annals of history. “Rayburn” is all over the Sam Rayburn State Historic Site in Bonham, from its name and its historic markers to the cattle brands on some of the posts holding up the tractor shed.

You will find portraits of Martha and her father, Judge John Barksdale Waller, in the sitting room, but the Waller name is much less prominent than the Rayburn one. Yet, there is something for the Waller side of the family that the Rayburn side lacks: a painting of a coat of arms hanging in the sitting room (above a bell-shaped cocktail shaker you may or may not have read about).

The British brought their customs with them to the American colonies, including the English common law that began in the ninth century and which U.S. governing bodies adopted. One part of this law, “coverture,” stated that women did not, and could not, have a legal identity—their identities belonged to their fathers, and then their husbands.

Dr. Catherine Allgor wrote about coverture for the National Women’s History Museum, and how it affected English women in the past and American women at the present. Although there were tricks to get around the absolute letter of the law then and now, the women of the past legally had no rights regarding business, their children, or their bodies. Within the modern period, American women continue to encounter the rules of coverture to varying degrees, from minor annoyances to legal contracts affected by the mere fact that they are women. 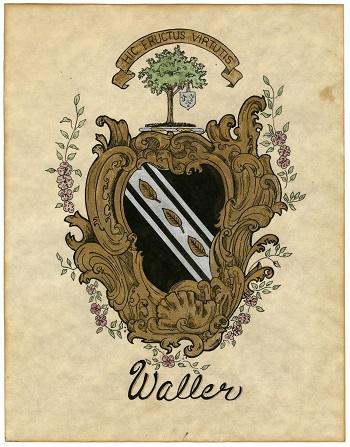 The online Encyclopedia Britannica goes into great detail describing the coat of arms and its origins, but to summarize: Think of the coat of arms as a design on a shield (the surface of a shield is called an “escutcheon,” by the way), which is divided into a grid of nine sections—all of which have specific names—where someone places the design.

This design can feature mottos, animals, plants, insignias, and more. As technology evolved, such as the ability to create more colors for decoration, so did the coats of arms. They also moved beyond original heraldry to representing family histories, schools, and businesses.

So, despite Martha no longer being a Waller and not having a right to the Waller coat of arms for her children because she was not a man, the Rayburn family still honored their matrilineal heritage. Odine Mhoon painted the Waller Family Coat of Arms that hangs in the sitting room.

She and Jewel Morris Lightfoot, Jr., a great-nephew of Sam Rayburn, married and divorced in 1956. In contrast to this short marriage, Mhoon’s art has persisted in the Rayburn home for about 65 years.

Above the word “Waller” and within a carved shield border decorated with pink flowers, three walnut leaves painted in gold are placed within two silver bands going diagonally downward left to right across a black background.

At the top (or “crest”) of the design is a walnut tree with a shield hanging from it. The shield has three fleurs-de-lis, a French word for “lily flower,” on it. Above the tree is the motto, “HIC FRUCTUS VIRTUTIS,” which means something close to, “This is the reward of integrity.”

The fleur-de-lis has a long association with France and French royalty, and may have different religious or political meanings depending on its usage. The Portal to Texas History has a digitized image of the coat of arms from our collection.

Alfred Steinberg, the author of Sam Rayburn: A Biography, hit the highlights of the Waller lineage when he wrote:

Just the opposite of early-day Rayburns, the Waller line was filled with outstanding public figures. There was a Waller with William the Conqueror in 1066 when he conquered England; another, Edmund Waller, was poet laureate of England during the reign of Charles II; and Colonel George Waller, a Virginia plantation squire, fought in the Revolution and was present at Cornwallis’ surrender to George Washington at Yorktown. Two generations later John Waller, a grandson of the colonel and a justice of the peace in Roane County, Tennessee, married Kathrine Pickle, and Sam Rayburn’s mother was the eleventh of their thirteen children.

In addition to the storied past mentioned above, some eagle-eyed Rayburn family member saved a newspaper image from 1954 featuring the Waller coat of arms and explaining why this English family features “the shield of France,” seen as the shield hanging from the walnut tree, on it.

The paper said, “An [Waller] ancestor captured the Duke of Orleans at the Battle of Agincourt and hung his shield on a nearby tree.” The Waller coat of arms from the newspaper has a blue escutcheon and three green walnut leaves on a red diagonal stripe bordered by white lines.

A tree is at the crest, where a shield featuring three fleurs-de-lis hangs. Project Gutenberg, which has free downloads of thousands of digitized books, has A Complete Guide to Heraldry by Arthur Charles Fox-Davies, originally published in 1909. This book describes several aspects of coats of arms as well as the origins of some of them, including the Waller coat.

This coat of arms originated in 1415 when Richard Waller of Groombridge captured Charles, Duke of Orleans at the Battle of Agincourt. Fox-Davies did mention, however, that someone named Waller claimed to be a descendent of Richard, but Fox-Davies had doubts about the certainty of that claim. Unfortunately, the author did not mention the specific meaning of the walnut tree and its leaves, but tree imagery appeared to be common in heraldry.

Had they known about the legal statutes behind coverture and heraldry, would the Rayburns had considered themselves Wallers? Did it ever occur to Martha, or anyone in her family, that she was technically no longer a Waller and had no claim to that name?

Did the Waller blood running through their veins help the Rayburns achieve all that they did? Like the women in medieval Europe who found ways to live full lives despite not having legal rights or the people who assume a coat of arms whether or not they could technically have one for their name, the Rayburns probably didn’t know or care about Martha’s name—she was simply their mother.

She commanded the household no matter the age of her children. She fixed Sam Rayburn lunches for his train rides to Austin and Washington, D.C. She was the model of honesty and integrity that her children followed.

Whether you think they should or should not, names do matter and they do have meaning. For a painting by a short-term in-law to have a place in the heart of the family home, the Waller name must have meant much to the Rayburns indeed.