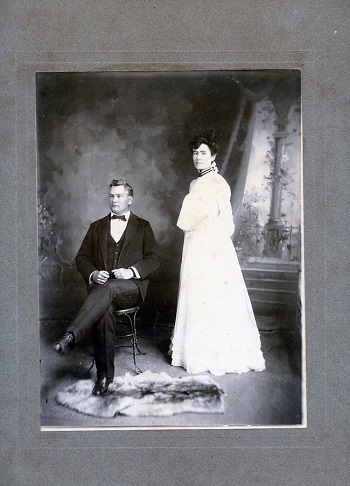 For many, August is a month of change: summer is ending, autumn is beginning, school is starting, and leaves are falling. 119 years ago this month, two people in North Texas added yet another significant change to the season—marriage!

These two individuals, W.A. Thomas and Katherine Rayburn (Thomas), were married August 30, 1899. In honor of their anniversary, our August Artifact Spotlight features a photograph of the young couple which is a part of the Sam Rayburn House State Historical Site collection.

The Rayburn family came to Fannin County, Texas from Roane County, Tennessee in 1887, consisting of parents William Marion Rayburn and Martha Clementine Waller (Rayburn) and their eleven children. Katherine, otherwise known as “Kate” or “Katie,” was the third child and oldest daughter of the Rayburn family, born November 19, 1873 in Tennessee.

She was the sister of congressman Sam Rayburn, who served in both the Texas and U.S. House of Representatives for a total of fifty-five years, from 1906 until his death in 1961.

The groom was William Albert Thomas, who most commonly went by “W.A.” or his surname, “Thomas.” Born and raised in Gober, Texas, W.A. was twenty-three years old when he married twenty-six-year-old Katherine Rayburn. Together they lived in the small towns of Leonard and Bonham, where W.A. taught for several years.

By 1918 and in the midst of World War I, the couple moved to Dallas, where W.A. was self-employed as a general contractor and signed up for the military draft at the age of forty-two. He later got a job at the IRS in Dallas, where he worked for most of his life as the regional administrator 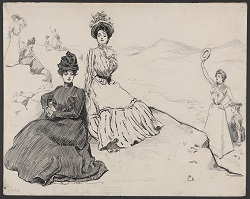 The photograph featured here is especially interesting because it captures the couple posed in a studio, apart from the extended Rayburn or Thomas families. It was taken before Katherine’s younger brother Sam had even begun his long and successful career, bringing attention to the Rayburn family.

In the photo, W.A. Thomas sits facing forward but is looking to the left, away from the camera, while Kate stands angled towards her husband and looks directly at the camera. W.A. wears a three-piece black suit and a thin black bow-tie, while Katherine wears a full, white dress that has ruffles on the front, loose-ended sleeves, and a high, striped collar.

Both W.A. and Katherine are dressed in clothing of the early twentieth-century Edwardian style. This style was characterized by voluminous, modest clothing which marked a departure from the restrictive corsets and tight sleeves for women of the Victorian era. This can be seen in the wide sleeves and hourglass shape of Katherine’s dress and more relaxed posture of W.A., who sits with legs crossed.

The distinguished style of Katherine’s dress may be directly influenced by the “Gibson Girl” feminine ideal which was prevalent in America from 1890-1910. The “Gibson Girl” was an icon created by American artist Charles Gibson, representing women who were expected to be independent, well-educated, and fashionable. This encouraged clothing styles that allowed for more movement, requiring more expensive fabric and embellishments such as frills. Katherine’s full skirt and pinned-up hair are other indications of this historical trend. 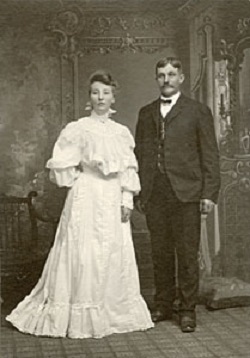 The photograph of W.A. and Katherine is not dated or located, although clues from the styles of clothing and photography may provide a more precise origin. Because the couple is dressed in the formal black suit and white dress of a typical bride and groom at the time, it is possible that the photo was taken for their wedding ceremony in 1899, although the style of their clothing could indicate a date closer to 1904/5.

The practice of men sitting while women stand in photographs was typical from this era through the mid-twenties and -thirties, when social movements such as women’s suffrage and the “New Woman” began to shift the traditional model of an aristocratic, male-dominated household.

Other photographs from this period confirm the suggested date of the artifact as being from the early years of the twentieth century. For example, a wedding photograph of Frankish Tindall and Alice Barnes of Racine County, Wisconsin in 1904 is almost identical to the artifact from the Sam Rayburn House SHS collection. In this photograph Tindall is dressed in the same black, three-piece suit and thin bow-tie of W.A. Thomas.

Alice Barnes’ white dress has the same bell-shape, wide sleeves, and high neck as Katherine’s, lacking only the stripes on the collar. Although both bride and groom are standing in the Tindall photograph, the similarity of both photographs is reinforced by painted backgrounds and a single chair placed at stage right. The date of W.A. and Katherine’s photograph can be deduced to sometime between their wedding in 1899 and 1904, because of its acute similarities to the Tindall photograph dated around the same time.

Although W.A. and Katherine never had any children of their own, they had a foster son named Liebling Mayo, who practiced law in Dallas. The couple kept in close contact with the Rayburn family from Bonham and loved to dote on their nieces and nephews. This is evident in a 1918 correspondence from George Atkins, the stepson of Dr. John F. Rayburn, who was stationed as a soldier in the Love Field Air Force Base in Dallas during World War I.

He was often visited by W.A. and Katherine, who lived nearby. In a letter to his grandmother Martha Rayburn, George wrote that “Miss Kate and Mr. Thomas continue to treat me as though I were a king. Their kindness and goodness to me sink deep among my most treasured memories.” 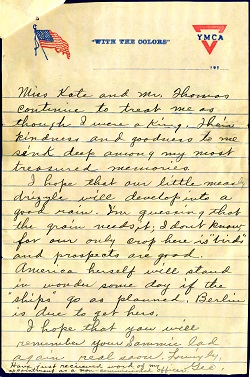 Although the couple never lived in the historic 1916 Rayburn house in Bonham, they did visit often from Dallas. Katherine especially would come and visit her sister Lucinda and mother Martha, until her mother’s death. Aside from regular visits, Katherine was present at some of Bonham’s most important occasions, such as the visit of President Harry S. Truman in 1948, and the opening of Sam Rayburn’s library in 1956.

W.A. and Katherine were married forty-six years until W.A.’s death on January 27, 1946. Katherine remained a widow until she passed away on May 17, 1971, ten years after her famous younger brother Sam. She lived to the proud age of ninety-eight and was the last surviving Rayburn child.

The Sam Rayburn House State Historic Site tells the real story of Sam Rayburn, one of the most powerful and influential politicians of the 20th century, in his authentic 1916 home. Preserved as a period time capsule, the two-story home contains all original Rayburn furnishings. The Sam Rayburn House State Historic Site is one of 22 historic attractions operated by the Texas Historical Commission. For more information visit www.samrayburnhouse.com.