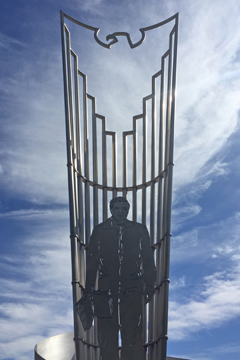 At the intersection of East Second and Salina streets in East Austin lies a new condominium building that looks like much of the modern construction that has sprung up in the area. What’s notable is what’s no longer there: El Jardin Alegre (the Happy Garden), a site listed in Preservation Austin’s Tejano Walking Trail guide, published in April 2010. The guide describes an idyllic garden with 40 plots, “where neighbors grow food together and build community.” Its disappearance is emblematic of rapidly changing—and historically layered—East Austin.

The 4.9-mile Tejano Walking Trail covers an incredible span of history, from the post-Civil War expansion of the railroad to the 2009 dedication of a Cesar Chavez statue at a library on his namesake street. The guide features 24 sites along the walking trail, plus an additional seven on the 5.6-mile Trail of Tejano Music Legends. The trails direct users through the heart of the East Cesar Chavez and Holly neighborhoods—a historically Hispanic area adjacent to downtown subjected to gentrification for more than a decade. In 2012, the U.S. Department of the Interior designated the trails as National Recreation Trails, and both are featured in the Texas Historical Commission’s (THC) Hispanic heritage travel guide and mobile tour.

The Tejano Walking Trail can be completed in as little as 2 1/2 hours, but more time is needed to read all the guide entries and interpretation, eat at one of the many area restaurants, or experience the Trail of Tejano Music Legends. Sites along the latter trail are more spread out and might best be covered by bike. Most sites on both trails are accessible by car, although it is not recommended as some details are easily missed.

One example is the LBJ Historic Oak Grove at Robert Weaver Avenue. The miniature, horseshoe-shaped roadway could be mistaken for a parking lot. But venture into the development, and several hidden houses emerge from the trees. The residences were built as part of a national design competition in the late 1960s aimed at creating an inclusive development of low-cost, energy-efficient model homes that could be cheaply mass-produced. President Lyndon Baines Johnson was involved in securing land for the project, and he and Lady Bird Johnson donated the oak trees, reportedly transplanted from their Hill Country ranch. Ten homes were given to Hispanic and African American families who won a lottery, and President Johnson dedicated the homes in December 1968.

The land where the development is located was once part of a 30-acre federal fish hatchery, the entrance of which can be seen nearby on Haskell Street. According to the guide, the land was donated by the City of Austin to the U.S. Fish Commission in 1940, and 19 ponds were built to raise fish that stocked lakes and ponds in 39 Texas counties. In 1940–42, minority youth with the National Youth Administration Service built the fishery’s ponds and buildings. Once a tourist and field trip destination, the hatchery closed in the 1960s, and most of the land was given to the nonprofit Austin Geriatrics Corporation, which built one of the city’s first high-rise apartments there.

Additional sites along the Tejano Walking Trail include one of the nation’s first public housing developments; a church where Cesar Chavez spoke and attended Mass in 1973; and the National Register-listed Willow-Spence Historic District.

The Tejano Walking Trail guide is available here. The area is brimming with hip cafes, restaurants, and bars—for traditional fare, head to Cisco’s, an East Sixth Street eatery that has served Tex-Mex classics since 1948; contemporary Mexican cuisine is on the menu at Takoba on East Seventh Street.

This article was originally published in the Winter 2016 issue of The Medallion. The "Web extra" set of photos below features images that were not included in the print version. All photos by Medallion Managing Editor Andy Rhodes.