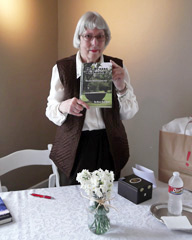 Varner-Hogg Plantation State Historic Site was pleased to host a book review of The Brazos Beckoned with author Marie Beth Jones. A notable author and resident of the area, Jones was the first speaker in Varner-Hogg’s 2013 Authors Series.

Jones is the author of a series of books focusing on the history of Brazoria County, including Tales from the Brazos, Trails and Tribulation: Early Texas Crime Stories, and Peach Point Plantation: The First 150 Years, which won the Texas Historical Commission’s 1982 best book award. Jones’ father and grandfather delighted in telling stories about Brazoria County’s past, and she has always treasured the area’s rich history, including in her “Tales from the Brazos” column that appears weekly in the Brazosport Facts. Jones described history as “the story of life back when, so it contains a little bit of everything we experience in our own lives.”

Jones read excerpts from her latest publication and shared stories about the research and writing of The Brazos Beckoned. Much of the research was garnered from county records, newspapers, memoirs, oral histories, and letters.

In The Brazos Beckoned, Jones tells the story of Dr. and Mrs. A.E. Phelps and the Mexican Gen. Santa Anna. Following the battle of San Jacinto, Santa Anna was taken prisoner and held at Phelps’ home, Orozimbo, in Brazoria County. It was at Orozimbo that an assassination attempt was made—and thwarted—on the general’s life. Later, Santa Anna remembered the Phelps’ kindness, when he spared the life of their son, Orlando, who was a member of the Mier Expedition. 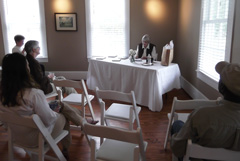 After answering questions from the audience, Jones signed copies of her book and mingled with guests and staff, creating yet another entertaining and informational session of Varner-Hogg’s Authors Series!