Beauty Behind Apocalypse: the Real Texas Courthouse in "The Leftovers" 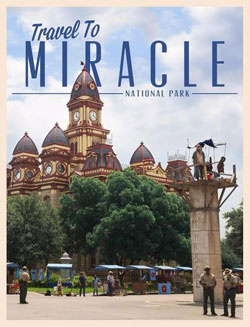 For a few months last year, Lockhart’s beautiful county courthouse square transformed into the fictional town of Jarden, Texas—the only town in the world spared from a mysterious global cataclysm in the HBO original series “The Leftovers.”

The show’s first season filmed in Westchester County, New York, but for season two the production moved to Central Texas. The show’s executive producer Mimi Leder told Austin Monthly that Lockhart beat out Atlanta and spots in California due in part to the well-preserved historic architecture in the “Barbecue Capital of Texas.”

A major part of Lockhart’s historic charm is the ethereal look of the Caldwell County Courthouse, a beautifully restored Second Empire-style building that dominates the county square.

The courthouse features prominently in several episodes of the show, and also appears in many of the promotional images distributed by HBO and the show’s website.

Like “The Leftovers,” some mystery surrounds the design of the courthouse. While it was built by contracting firm Martin, Brynes & Johnson, there is no clear record of who designed the courthouse. THC Architecture Division staff believe credit likely goes to Henri E.M. Guindon, but the design is alternately attributed to both Guindon and Alfred Giles in different instances. 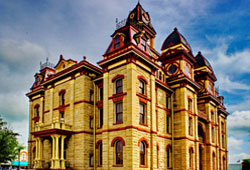 Prominent productions that came to Texas and utilized county courthouses include the 2012 remake of “True Grit,” “Bernie,” the television shows “Revolution,” “Friday Night Lights,” and “Walker, Texas Ranger,” plus classics including “Places in the Heart” and “The Last Picture Show.” Combined with the state’s financial incentives and experienced workforce, filming at county courthouses can generate revenue and publicity for the local community long after the cameras have stopped rolling.

Even if no production is ever filmed in a courthouse, preserving a Texas historic county courthouse helps maintain a community’s unique identity. The Caldwell County Courthouse serves as an anchor for the “Most Beautiful Town Square in Texas,” the brand for downtown. It is frequently used for special events that draw thousands of visitors and shoppers, such as the Lighting of the Square, Red Poppy Festival, and weddings. The courthouse is open every Saturday for guided walking tours by Caldwell Museum volunteers.

“Having a downtown that surrounds an active courthouse brings visitors and residents regularly,” says Kim McAuliffe, the city’s Downtown Development Manager, noting that Lockhart has participated in the Main Street program since the 1980s. “Following the restoration, our town experienced a reinvestment uptick in buildings, infrastructure, and new business openings. I love these events so much because kids run around making memories of being downtown—memories that will bind them to this community and make them want to protect it.”