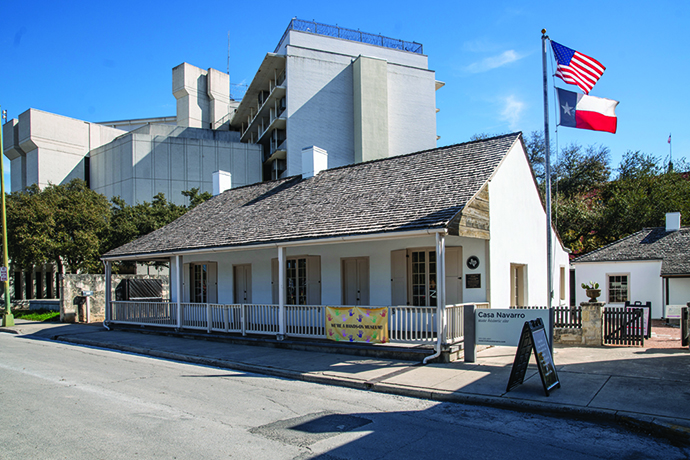 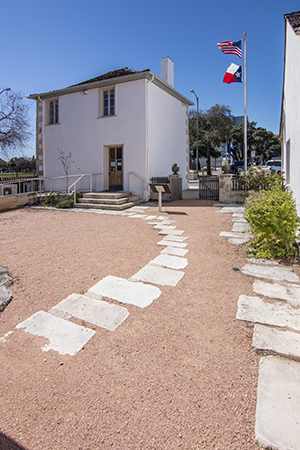 San Antonio’s bustling urban environs belie its role in the Texas Revolution. Although it’s challenging to imagine the nation’s seventh-largest city as it appeared in the mid-1800s, pockets of independence-era vestiges remain scattered throughout downtown.

In fact, one of the best places to see what life was like in Alamo City back then is Casa Navarro State Historic Site. The Texas Historical Commission (THC) property is the original 1850s home of José Antonio Navarro, a leading advocate for Tejano rights  and one of only two native-born Texans to sign the Texas Declaration of Independence.

Visitors get a sense of mid-19th century Texas as they walk among the site’s charming whitewashed adobe structures topped by roofs with rugged wood shingles. But beyond the low-slung walls, it’s a different story. A massive Brutalist-style detention facility looms over the site, while modern parking garages and institutional facilities peek behind the outstretched arms of live  oak trees.

This dichotomy even causes some people to question Casa Navarro’s locale.

“We’ve had visitors ask us when the casa was moved here,” says site interpreter Lester Velazquez-Po. “People sometimes ask the same thing at the Alamo, which is about a mile away from here. They don’t know that the city grew around these historic structures that have been here for hundreds of years and tell the stories of this city’s past.”

Velazquez-Po uses the opportunity to discuss Casa Navarro’s stronghold in the area during several rounds of San Antonio urban renewal, and how much of the surrounding history was lost “when people tried to wipe the slate clean.”

Although Navarro lived here just after the Republic era, his contributions to Texas’ independence are significant. His familiarity with the land as a native-born resident was advantageous, as was his bilingualism.

“As I fought, so shall I be willing to die. I will never forsake Texas and her cause. I am her son.”

Navarro spoke these words during the Santa Fe Expedition of 1841, when his loyalty to the Republic of Texas was put to the test by a Mexican military official. Espindola occasionally fields questions from people who aren’t aware of events occurring during Navarro’s lifetime, such as the advent of railroads and telegraphs.

“Our site really helps put things in perspective that visitors didn’t know about,” she says.

Velazquez-Po adds, “Navarro said he will always be a Texan, that was his main identity. He was a proud Tejano.” 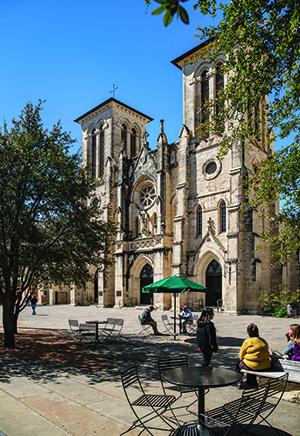 A couple blocks east of Casa Navarro is Main Plaza, one of San Antonio’s most important historical gathering places for nearly 300 years. Even today, it retains the feel of a European plaza, with alfresco cafes and bustling foot traffic in the shadows of ornate architectural works of art.

One of the most prominent buildings is the remarkable San Fernando Cathedral. The congregation was originally organized in 1731 by a group of families from the Canary Islands, and it has since been a centerpiece of San Antonio.

The current Gothic Revival structure— officially consecrated in 1873— features lofty arches, a gilded 24-foot-tall altar, and enormous stained-glass windows. People of all denominations gather at the church throughout the day to light candles, pray in the pews, or simply gaze upon the serene surroundings.

Most San Antonio visitors (and many residents) are unaware that the cathedral also played a role in the Texas Revolution. In late 1835, Mexican Gen. Martín Perfecto de Cos arrived in San Antonio and selected the Main Plaza area as a defensive fortification. Several times during the Texas Revolution, San Fernando Cathedral served secular purposes, including hosting Mexican cannons on its roof during the Siege of Bexar. 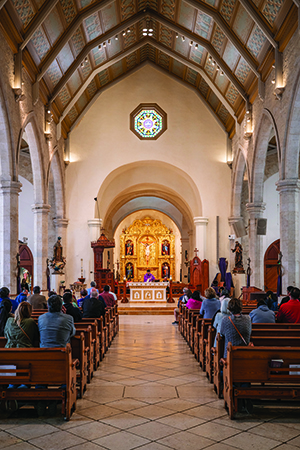 The siege started when Texian soldier Ben Milam roused troops to storm Main Plaza on December 5. Cos had 1,200 men, but they were unable to hold off the Texians, so they retreated to the Alamo and eventually sent a white flag to Main Plaza.

On December 11, 1835, the Texians officially accepted Cos’ surrender in nearby La Villita. The site of the surrender remains in the historic neighborhood, now home to charming shops and restaurants near the Riverwalk. The Cos House features a solid stone marker noting the momentous surrender that occurred there.

Back on Main Plaza, the Texians flew a victory flag from the San Fernando Cathedral. A few months later, Mexican Gen. Antonio López de Santa Anna used the church as a lookout, and ordered a red flag—a symbol of showing no mercy—to be flown there as a warning to Texians at the Alamo, who had since captured it.

For those strolling around the picturesque plaza, be sure to find the somewhat-hidden yet informative THC historical marker dedicated to the Siege of Bexar. Tucked away in an alley just east of the Bexar County Courthouse, the marker commemorates the conflict with additional information on panels developed by the Bexar County Historical Commission.

“Main Plaza harkens back to a time that many of us associate with Texas history books and school-day lessons,” remarks Bob Brinkman, the THC’s historical markers program coordinator. “The sites in this area help us appreciate the fact that centuries-old heritage is still a tangible resource in the Lone Star State.”