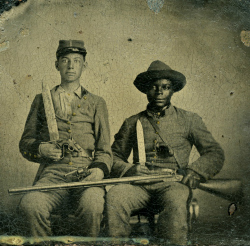 At the Confederate Reunion Grounds in Mexia, annual reunions were regularly held that attracted veterans and their families from across Texas to share several days together feasting and reminiscing about their time during the Civil War. Attendees of the Joseph E. Johnston Camp No. 94 were accustomed to hearing many interesting speeches from members and guests at the reunions every summer. The speeches included topics like “The Life and Character of Stonewall Jackson,” “The Negro Before and After the Civil War,” and “The Suffering, Devotion, and Patriotism of the Ladies of the South.”

They may not have been accustomed to hearing a speech from an African American, but Nicholas Blain came as a delegate from the William L. Moody Camp, United Confederate Veterans, of Fairfield, Texas. Blain had also traveled as a delegate to reunions in other Texas cities, and had even attended the national reunion of the United Confederate Veterans in Nashville in 1904.

As a 20-year-old in 1861, Nicholas had accompanied his equally young master, George Blain, off to war. When George was killed in battle in 1864, Nicholas diligently searched the battlefield to recover his body, bringing it to the house of nearby relatives of the Blain family to be buried. The rest of his life was spent in Freestone County, where he became a farmer, married, and named one of his several children George.

In her research for the Confederate Reunion Grounds, author Laurie Jasinski noted, “camp records referred to the man as ‘the colored Confederate Soldier.’” Talking about his experiences during the Civil War, Blain recalled “four years of serving Company ‘G,’ Seventh Texas Infantry, by cooking meals, washing clothes, and tending the wounded.”

Come learn more about this noteworthy individual and his place in the history of the Civil War, as we hear Brian Elliott of the University of North Texas talk about his research on Texas Confederates and their black body servants during and after the Civil War. The lecture will take place Saturday, July 22, from 2:30–3:30 p.m. at Confederate Reunion Grounds State Historic Site.