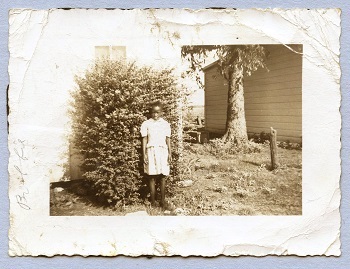 February is Black History Month, a time to reflect on the identity and achievements of African Americans in our community. This year's theme is "The Black Family: Representation, Identity, and Diversity." We thought it would be a good time to introduce the family that was the backbone of day-to-day operations at Mr. Sam's farm.

Bobbie had been married previously and, in 1942, Bobbie and Charlie took in Bobbie’s 5-year-old granddaughter, Barbara Jean Ganther. Bobbie’s daughter, Emma Belle Merrell, and her two children, Joe Dale and Minnie, joined the cottage’s household in 1948. Mr. Sam thoughtfully purchased a house in Bonham for Charlie and Bobbie in 1950, and the family moved to town.

Each family member had their own duties on the farm. While Bobbie was in charge of cooking, laundry, gardening, and cleaning, Charlie managed the farm’s outdoor operations. Bobbie had a reputation as an excellent cook, and she rarely used a recipe or measured ingredients. One of her most famous meals was fried chicken, which was one of Mr. Sam’s favorites. Even Barbara pitched in, plucking the feathers from the chickens before her grandmother cooked them.

When the Rayburn family hosted large groups or dignitaries, Charlie and Barbara were both called on to help. Charlie would help Bobbie serve the guests while Barbara cleared plates from the table. In an oral history from 1977, Charlie Phillips recalled a particular visit: “I remember when Lyndon Johnson came and brought his wife. He was nice and easy to know. I served both of them at the family table.”

Charlie’s duties outside included tending the animals, plowing the cotton fields, repairing and constructing outbuildings, assisting with butchering and curing meat, threshing, chopping firewood, and driving into Bonham on various errands. Up well before dawn, Charlie would begin milking the farm’s dozen or so cattle at 4 a.m. On cold mornings, he was also in charge of lighting a fire in the fireplace in the sitting room.

On a farm, everyone has chores to do, and Barbara was no different. Her duties included shooing the chickens out of the bushes, assisting in the garden and with canning, helping with dusting and other light cleaning, and helping with the laundry. She would also help brush Miss Lou’s hair and accompany her on shopping trips to town. 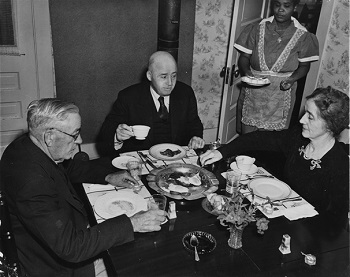 The Rayburns' relationship with the Phillips family was more like close friends or even family than employer and employees. In an oral history with Barbara in 2006, she recalled Mr. Sam as being a very kind man and very fair to African American people. She said he never used derogatory language to them, and felt he had a lot of respect for both Bobbie and Charlie. Not people to sit back, Tom and Sam Rayburn often stepped up to help Charlie with his outdoor duties. Tom frequently helped with milking the cows, while Mr. Sam liked to assist with chopping wood. A letter from Bobbie to Lucinda Rayburn while Miss Lou was visiting Washington, D.C. also shows the familiarity and affection between the families, as Bobbie relates the latest news from Bonham and wishes Miss Lou a happy birthday. After Bobbie’s death in 1956, her daughter, Emma Belle, stepped into her mother’s shoes as the Rayburn’s family cook.

Today, you can see the Rayburn farm, including a reproduction of the caretaker’s cottage, and explore the dynamic between the two families at the Sam Rayburn House State Historic Site. The site is open Tuesday through Thursday from 10 a.m. to 4 p.m. For tours of the Sam Rayburn House, reservations are strongly recommended. Please call 903-583-5558 for more information or to secure your tour.

The Sam Rayburn House State Historic Site in Bonham tells the real story of Sam Rayburn, one of the most powerful and influential politicians of the 20th century, in his authentic 1916 home. Preserved as a period time capsule, the two-story home contains all original Rayburn furnishings and housewares.  The Sam Rayburn House State Historic Site is one of 32 historic attractions operated by the Texas Historical Commission.