In honor of the African American community members who lived and worked on the Rayburn farm, the Sam Rayburn House State Historic Site hosted an open house on Saturday, February 10 to recognize their contributions to the Rayburn story. 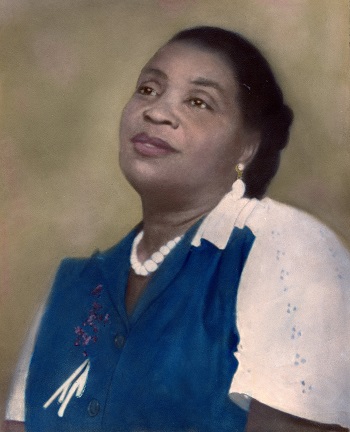 Charlie Phillips was hired by Sam Rayburn’s brother, Tom Rayburn, to be the caretaker of the Rayburn farm in the year 1939. Upon his arrival for the new position he was introduced to the Rayburn’s cook, Bobbie Erskine. The couple married in 1940 and lived together in the two-bedroom caretaker’s cottage just to the south of the Rayburn’s home. The cottage was originally constructed in the 1920s for the Rayburn’s first caretaker, Zeke Booms.

In 1942, Bobbie’s granddaughter Barbara Ganther moved in with the couple. Around the year 1947, Bobbie’s daughter Emma Belle Merrell and her children Minnie and Joe moved from Lubbock to Bonham and moved into the caretaker’s cottage as well. Charlie and Bobbie’s family moved into a house on North Cedar Street in Bonham around the year 1950. The house was purchased for the family by Sam Rayburn.

Included in the Black History Month open house celebration was a display of artifacts related to Charlie and Bobbie’s family. Artifacts include a handwritten letter written by Bobbie to Sam Rayburn’s sister Lucinda in 1945 while she was in Washington D.C. visiting her brother. Bobbie reported, “I told Mrs. Bartley (Sam Rayburn’s sister) we would have a dinner Sunday in honor of you, as you [were] away. We are having lots of fun. The house is in perfect shape.”

Also, on display is a small black and white photograph of Bobbie’s granddaughter Barbara standing in front of the caretaker’s cottage at the Rayburn farm. Though the original cottage was torn down in the early 1970s, visitors to the Black History Month open house viewed brightly colored scraps of mid-century style wallpaper salvaged from the home before its demolition.

Also on display, in honor of the World War I centennial, were photos and names of the African American men from Fannin County who served in the war, historic archives, and patriotic propaganda.

The Sam Rayburn House staff provided refreshments and guided tours of Sam Rayburn’s home with a focus on the Phillips family as part of the day’s events.

The Sam Rayburn House State Historic Site tells the real story of Sam Rayburn, one of the most powerful and influential politicians of the 20th century, in his authentic 1916 home. Preserved as a period time capsule, the two-story home contains all original Rayburn furnishings. The Sam Rayburn House State Historic Site is one of 22 historic attractions operated by the Texas Historical Commission. For more information visit www.visitsamrayburnhouse.com.