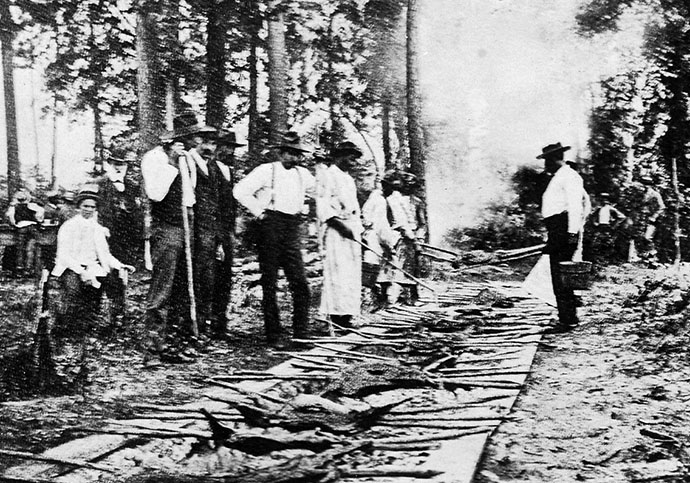 This article originally appeared in the July/August 2005 issue of The Medallion.

Article and photos by Andy Rhodes, Managing Editor The Medallion

Mention the word barbecue in Texas and two things are bound to happen. First, people’s hunger juices will start flowing; second, a debate will ensue about the best way to prepare the meat.

According to Robb Walsh, a food writer for the Houston Press, southern African American cooking customs and German meat markets primarily influenced modern Texas barbecue. The term is also tied to the Spanish word barbacoa, a South Texas cooking method in which the meat is wrapped and cooked in a pit of coals. 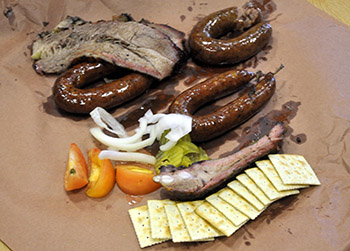 The concept of barbecued meats on a lunch plate was likely introduced when African American and Mexican American cotton pickers—familiar with their own traditional pit-style of cooking—ordered sausage and ribs from the German butcher shops in small Central Texas towns.

“These workers weren’t allowed in restaurants at that time (early 1900s), so after they got paid, they’d walk over to the market and get some fresh smoked meat on butcher paper and eat it right there,” Walsh explained. “The workers were calling the meat ‘barbecue.’ It’s not like they were walking in there asking for knockwurst.”

To this day, the traditional German approach continues at Kreuz Market in Lockhart, where the meat is prepared and served almost exactly the same way it was 100 years ago. Keith Schmidt, Kreuz’ general manager, says his family strives to keep things as simple and similar as when they opened as a grocery store and butcher shop in 1900. 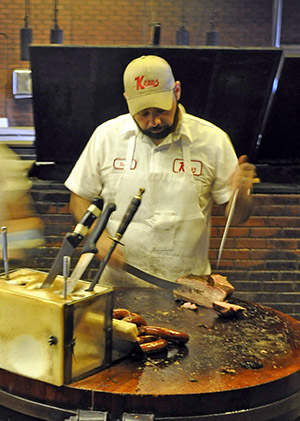 Back then, customers would order meat by the pound accompanied by a few side items—typically crackers or bread, and a pickle, onion, or item of produce on the grocery store shelves—and eat the meal with their bare hands. At Kreuz, it hasn’t changed.

“We didn’t have silverware back then and we don’t now,” said Schmidt. “Same thing with sauce. People are flabbergasted we don’t use sauce. Some people think that’s the most important part, but why would you want to mask the flavor of the meat? I could barbecue a skunk and it would taste great with enough sauce on it.”

Not everyone agrees. Many styles across the state, including West Texas open-pit cowboy barbecue and urban and rural African American styles, rely on mops (bastes) and tangy or sweet sauces to enhance or accompany the meats. 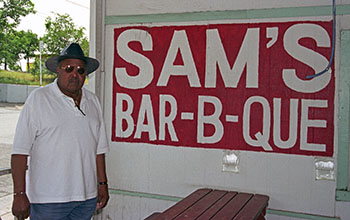 At Sam’s Bar-B-Que, a renowned restaurant in East Austin, the sauce is so vital it has a secret recipe.

“Sauce is an important part of barbecue—everybody has different tastes, but you’ve got to have a good sauce on there,” says Sam’s owner Dan Mays, who will only admit that his sauce is tomato-based. “A lot of people put vinegar and lemons in their sauce and lots of people use sugar. Mine isn’t sweet like that. The seasoning I use is different, but I can’t tell you what it is.”

Regardless of approach, the history of barbecue in Texas boasts a fascinating mix of cultures and techniques that spawned the smorgasbord of cuisines many people enjoy today.

The earliest Texans to roast meat were likely the Caddo, who cooked venison and other game over an open fire thousands of years ago. In the 1600s, Spanish shepherds reportedly spit-roasted lamb and goat al pastor (“shepherd style”) on the plains of South Texas.

It wasn’t until the early 1800s when the word barbecue—a variation of the Haitian word barbacot, meaning a framework of sticks for smoking or roasting meat—was likely used for the first time in Texas. According to Eats: A Folk History of Texas Foods, Haitian slaves in the Carolinas introduced the concept of “barbecuing” to plantation owners. The exotic and tasty tradition of roasting a whole hog in a pit extended across the South and to Texas, with African American families holding family barbecue gatherings and eventually incorporating the custom into Juneteenth celebrations. 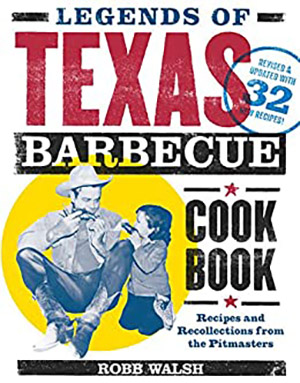 In his book Legends of Texas Barbecue Cookbook, Walsh discusses the importance and distinction of beef to Texas barbecue. With the abundance of cattle in the state after the Civil War, some Texans barbecued an entire steer to satisfy large groups in the days before refrigeration. Lesser cuts of beef were also used by many West Texans with a mop baste of oil and vinegar over hot coals in open pits, a method known as cowboy style.

According to Walsh, African Americans in East Texas would occasionally substitute their traditional Southern pork cooking style with beef, which was more plentiful and inexpensive. Brisket, in particular, was considered to be somewhat self-basting and could be slow-cooked and smothered in sauce.

“Ultimately, there is no true definition of barbecue—there are a lot of etymologies, a lot of popular beliefs, but it’s impossible to decide on one universally accepted approach,” Walsh said. “It’s safe to say that Texas barbecue is made up of a lot of different and wonderful cultural traditions that nobody is willing to change, and I sure hope they never do.”