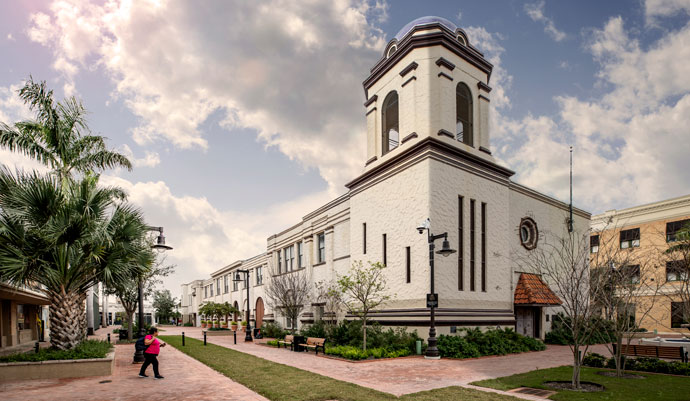 THC Commissioner Lilia Garcia is standing on a balcony overlooking the Rio Grande. As she recalls stories about the formerly fluid movement between Brownsville and Matamoros, she sighs deeply. It’s been many years since she crossed the river to visit friends in Mexico. Although Brownsville is safe, Garcia wonders if the city’s deep connections to Matamoros are in danger. 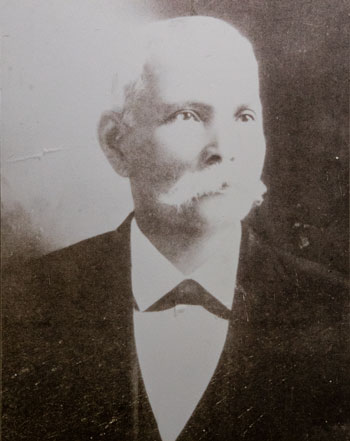 Garcia’s great-great grandfather was Francisco Yturria, a contemporary of Texas cattle barons Richard King and Mifflin Kenedy. In the mid-1800s, Yturria made a name for himself working with these legendary figures as a businessman on both banks of the Rio Grande. It reminds Garcia that Brownsville and Matamoros have historically been intertwined.

“Everything going on now with the cartels and politics is disrupting that binational relationship—it’s a much tougher situation than it used to be,” she says. “But I have faith things will work out in the long run.”

Garcia likens the condition to nearby South Padre Island. Although there are sharks in the Gulf of Mexico, they rarely, if ever, attack swimmers. The danger exists, but not enough to discourage travelers.

“It’s similar to what’s happening on the border,” she says. “You can come here and experience this beautiful historic city without being at risk.”

Garcia dedicates her career to the subject of history as a lecturer at the University of Texas-Rio Grande Valley (UTRGV). She wrote her academic thesis about her great-great grandfather, and his compelling story often informs her students about the region’s colorful history.

Yturria was born in 1830 in Matamoros. Before there was a defined border, the area was simply known as the Wild Horse Desert, with Matamoros housing citizens from the U.S., France, England, and Germany. Later, Yturria began working with businessmen in Matamoros and Brownsville, including town organizer Charles Stillman. During the Civil War, Yturria assisted in shipping operations with King and Kenedy. The boats—loaded with cotton for overseas markets—flew the Mexican flag, so Union troops could not stop them during the war’s commercial shipping blockade.

“Francisco’s bi-national background was really advantageous in this situation,” Garcia says. “Since he’s Mexican, he knew that power and influence come from your name and land holdings. The American part of him understood finance and how you make a name for yourself with big numbers. He really straddled that line.”

Yturria went on to become a naturalized U.S. citizen and a prominent Brownsville merchant and banker. As he gained wealth and property, he became more interested in his land holdings. He found success in the Chisholm Trail era by sending cattle with King and Kenedy, and eventually invested in railroads (the St. Louis, Brownsville, and Mexico Railway), which opened the Valley to the lucrative business of citrus farming.

Yturria died in 1912 at age 81. He had amassed over 150,000 acres in four South Texas counties. By the end of his life, he was known as Don Francisco Yturria (nicknamed Don Pancho), a title he carried with pride.

“Francisco never fought against his Mexican identity,” Garcia explains. “He had power-holding friends on both sides of the Rio Grande, but he was still from Mexico. He was a bridge—much like the bridges in Brownsville from the U.S. to Mexico. He truly served as a connection between the two countries.”

BROWNSVILLE BECKONS
The Yturria family’s legacy reaches all aspects of the Valley, including the long drive south to Brownsville on State Hwy. 77, which traverses the family’s historic ranch. Look for a building near the road with the sign “Yturria Ranch, Frank Yturria” (referencing Garcia’s uncle, who was a THC commissioner from 2001–07).

“Everything John Wayne did in his movies was first done by the vaqueros,” Garcia says.

Garcia notes the THC has a strong association with downtown, including its designation as an official Texas Main Street city, a recent recipient of a Certified Local Government grant for a historic resources survey (which identified 2,000 historically significant buildings), and the agency’s recent approval of its nomination as a National Register district.

For much of the 20th century, Matamoros residents crossed the river to shop in downtown Brownsville for goods and services unavailable in Mexico. Although the foot traffic has slowed due to recent trends—mainly driving to Brownsville’s suburban strip malls for parking and cargo convenience—the historic downtown area is still vibrant and safe.

“On this side of the Rio Grande it’s not dangerous, but we still tell everyone ten cuidado(be careful),” Garcia says. “Fortunately, people are starting to open new restaurants, bars, and shops downtown for a younger crowd. Locals and visitors will always be interested in old buildings with a lot of historic charm.” 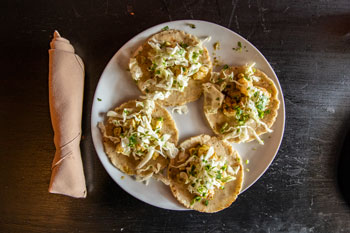 One of these places is Terra's, an “urban Mexican kitchen.” The large historic room is welcoming, with windows offering plentiful sunshine and pleasant views of the busy street scene. The food is even more impressive, including a rotating menu with options like shrimp tacos on homemade corn tortillas, a Mexican club sandwich with prosciutto and chile arbol sauce, and ribeye with pecan mole.

While downtown, be sure to visit the nearby Brownsville Heritage Complex, containing the Heritage Museum and the Stillman House Museum. The 1850 Stillman House—one of the city’s oldest structures and former home of Brownsville founder Charles Stillman—showcases period furniture, family mementos, and educational panels about the town’s early history. It also has a binational connection that’s often overlooked: it served as the Mexican consulate when it was purchased by Manuel Treviño de los Santos Coy in 1858. 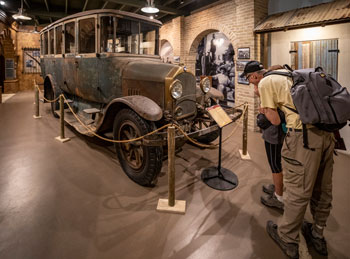 Just a block away is another Brownsville Historical Association (BHA) property—the Market Square Research Center. This stately building, complete with whitewashed walls and a domed bell tower, made its debut in 1852 as an open-air market. After nearly a century of hosting fruit, vegetable, and meat vendors, the property was acquired by the city, and it now houses the BHA’s collection of costumes, Mexican cinema posters, and photos. Research requests are available by appointment. 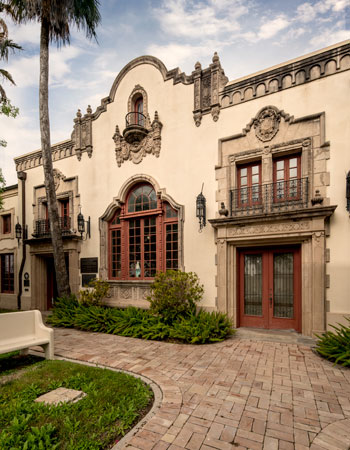 Nearby is the BHA’s Historic Brownsville Museum, located in the 1929 Southern Pacific Railroad Depot, a magnificent Spanish Colonial Revival building listed in the National Register of Historic Places. Ornate stone carvings hug the window frames, red-clay tiles descend from the roofline, and Old-World ironwork transport visitors to another era. Plan extra time to view the railroad exhibit, including an impressive 1872 Baldwin locomotive, and the Mary Yturria Education Center. 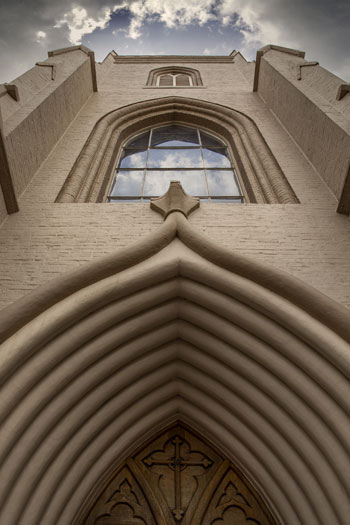 Hallowed in a very different way is Palo Alto Battlefield. Located about 10 miles north of Brownsville, this National Park Service site was the scene of a bloody battle on May 8, 1846 during the U.S.-Mexican War. The battle set the stage for the Mexican army’s retreat across the Rio Grande, which ultimately gave the U.S. a nation from sea to shining sea. The site’s visitors center hosts interactive exhibits, artifacts, and an engaging film that tell the battlefield story. Walking trails with interpretive panels provide an overview of the battleground’s key locations.

A few miles away is Palmito Ranch Battlefield, one of the most significant Civil War military sites in Texas—both regionally and nationally. The National Historic Landmark, identified by a THC historical marker, is the site of the last land battle of the war (May 12–13, 1865), and is the topic of a THC brochure. 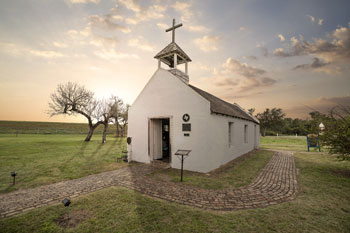 A visit to the Valley is incomplete without stopping by La Lomita Chapel (on FM 1016 in Mission). This profoundly serene site dates to 1899 and offers travelers a respite from the road and modern distractions with its historic adobe architecture, gleaming white walls, and welcoming breezes.

Just a few miles away are two of the Rio Grande Valley’s major destinations for ecotourists, who flock to the area to see and photograph rare bird and butterfly species. The Valley is a channel for migratory animals, drawn away from the gulf waters to the area’s nourishing flora. Mission’s National Butterfly Center and McAllen’s Quinta Mazatlan World Birding Center are especially popular with heritage travelers. Read more about the Valley’s ecotourism destinations at thc.texas.gov/blog.

Subscribe to the Medallion for this, and many more articles.