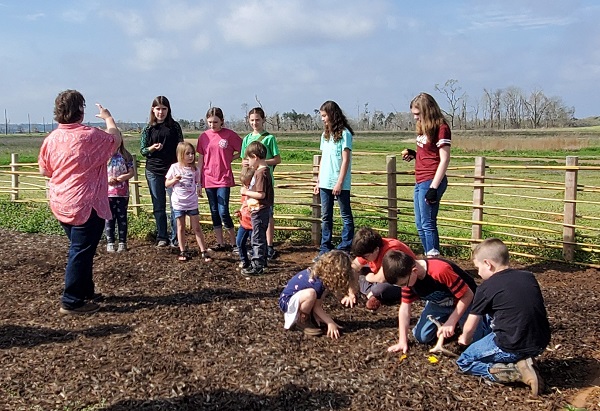 In this time, when we are asked to draw in and make our worlds smaller, when groceries are sometimes hard to come by, and we are trying to minimize our trips to public places, I’ve noticed people’s focus and interest return to foraging for wild food and medicine, gardening, and other homesteading activities.

For many in East Texas, these are normal ways of living with knowledge and skills passed down through generations by parents and grandparents. In fact, this fertile East Texas land has been farmed for over 80 generations of people beginning about 2,500 years ago. 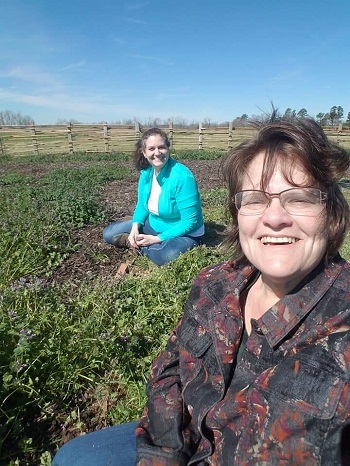 At Caddo Mounds State Historic Site in Alto, we are exploring and teaching about the land management, farming, and foraging practices of the early Caddo people through the knowledge of scientists (archeologists and botanists), historians, anthropologists, and the Caddo people.

In 2016, after a visit to the Plum Bayou Garden at Toltec Mounds Archeological Park in Scott, Arkansas, the staff at Caddo Mounds broke ground on Snake Woman’s Garden. Snake Woman’s Garden is a 50x50 foot space that highlights the history of Caddo agriculture from prehistory to present day.

For many, the thought of snakes brings a shudder, but for the Caddo people, Snake Woman was responsible for bringing them seeds and teaching them how to tend them. The following cautionary tale for children, "Snake-Woman Distributes Seeds," teaches a simple lesson of respect for growing things.

The Great Father gave the seeds of all growing things to Snake-Woman. He taught her how to plant the seeds and how to care for the green things that grew from

them until they were ripe, and then how to prepare them for food.

One time, when Snake-Woman had more seeds than she could possibly care for, she decided to give some to the people. She called her two sons and asked them to help her carry the seeds. Each put a big bag full of seeds on his back, and then they traveled all over the world, giving six seeds of each kind of plant to every person.

As Snake-Woman gave each person the seeds, she told him that he must plant them, and must care for the plants that grew from them, but must allow no one, especially children, to touch them or even point to them as they grew. She said that until the seeds were ripe they belonged to her, and if anyone gathered them too soon she would send a poisonous snake to bite him. Parents always tell their children what Snake-Woman said, and so they are afraid to touch or go near any growing plants for fear a snake will come and bite them. 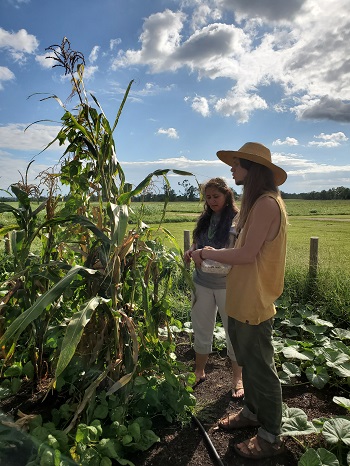 If this story has you asking what venomous snakes might have been in those early East Texas gardens, then archeology holds a clue. The image of a timber rattlesnake is found on some Caddo pottery.

One of these items, a snake bottle, was found in the burial of a woman at the Washington Square Mounds Caddo Archeological Site in Nacogdoches. This is particularly interesting, since Caddo women were the farmers, responsible for tending to growing things. Also fascinating is that some of these snake bottles were found with corn residue in them, suggesting a connection to farming and the Snake Woman story.

Thanks to the work of archeologists and botanists like Dr. Leslie Bush (paleoethnobotanist) and Dr. Elizabeth Horton (station archeologist at Toltec Mounds), we have archeological information about the plants the early Caddo cultivated, research into how these early Texas natives were cultivated for use, and how some of them might have been used as food and fiber materials. Some of these, like goosefoot or lambsquarter, you might recognize as weeds that you diligently remove from your fields and garden.

Others, like corn, beans, squash, and sunflowers may be more familiar garden choices. The Caddo utilized milkweed, paw paw, rattlesnake master, river cane, and other plants for making cordage and weaving baskets. Blackberries, persimmons, pecans, and black walnuts, among other fruits and seeds, were most likely tended where they were found. With the coming of early Europeans, the Caddo began growing watermelons and peaches. Explorer Henri Joutel first recorded the Caddo people growing watermelon and peaches in the mid 17th century.

The addition of Snake Woman’s Garden at Caddo Mounds has created many opportunities for the community to get involved with the site and get their hands dirty. Through a partnership with the Cherokee County Extension Office and extension agent Kim Benton, we have developed a home-school garden program that takes place each spring and fall. 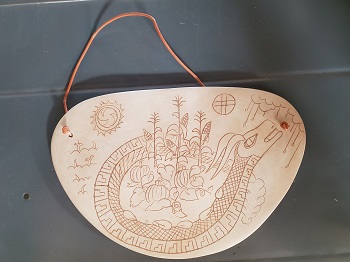 Through this program, East Texas homeschool children learn about Caddo history and culture, how to plant and tend a garden, how to cook up tasty garden treats, and how to find and recognize a few of our wild edible plants. Volunteers regularly join us to work on tending the garden. Snake Woman’s Garden has served as a central theme for workshops and programs covering everything from plants and farming styles to snake habitats.

Most recently, Snake Woman’s Garden has become a symbol of resilience and renewal when it not only survived, but also thrived after the devastating tornado that hit Caddo Mounds last April. The garden served as the focal point for the site’s re-opening in January 2020. At this event, we invited the community to help commemorate our re-opening by planting muscadine grapes and a cedar tree around the garden.

Both of these plants, important to the Caddo people, were planted in the way taught to one of our Caddo community by her grandmother. Tracy Burrows asked us to start each plant by adding tobacco to the hole it would be planted in, water it for the first time with spring water (water taken from an ancient natural spring on site), and a prayer. We were fortunate to have Caddo elder Marylin Threldkeld present at the re-opening to help us carry out Tracy’s request. Since the re-opening, new plants have been welcomed to the garden in this traditional way.

Even though work in Snake Woman’s Garden is a solitary event at the moment, our partners and volunteers are making sure the seeds, plants, and much-needed gardening tips are available so that when we are once again allowed to gather as a community, you will have a beautiful space to explore.