This article was originally featured in the January 1990 issue of The Medallion. 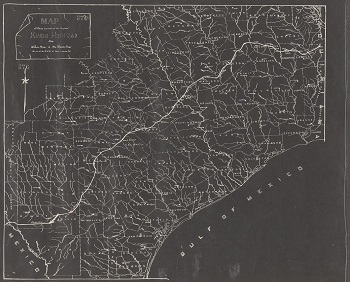 Texans are preparing to celebrate the 300th anniversary of one of the oldest and most significant roads in Texas. Known as the Camino Real (King’s Highway), and also called the Old San Antonio Road, it was one of the most important factors in the early development of the state.

It was first traveled by Spanish colonists and missionaries who attempted to extend their hold deep into the northern province, or what is now Northeast Texas.

When Texas was a Spanish territory, the Camino Real was not one single road, but a system of roads. A portion of it passed near what are today Eagle Pass, San Antonio, Bastrop, Crockett, Alto, Nacogdoches, and Natchitoches, Louisiana.

The route was blazed in 1691 by the Spanish explorer Domingo Teran de los Rios, the first provincial governor of Texas.

Although many routes that connected Spanish missions and presidios in Texas were called Camino Real, the one route blazed by Teran became so important and well-traveled that it is considered one of the most historically significant roads in Texas.

Because of the road’s historic importance, the 71st Texas Legislature recently passed a resolution calling for a nine-member commission to establish a preservation plan that will identify, preserve, and interpret the surviving cultural and natural resources along the highway.

During the 1700s, the route was used to transport supplies, priests, soldiers, and colonists to East Texas. At the same time, trade developed between the missionaries and the French in Natchitoches, Louisiana. In 1714, the road was laid out from San Antonio to the Rio Grande by French trader Luis Juchereau de St. Denis.

By the 19th century, the route became the main artery for trade and immigration as thousands of colonists entered Texas from Louisiana at Gaines Ferry on the Sabine River. This northeast portion of the Camino Real, now Texas Highway 21, was followed by Moses Austin in 1820 as he traveled to San Antonio to request an empresario grant from the Spanish government.

In its entirety, the Texas portion of the Camino Real extends diagonally through the state from Louisiana to the Rio Grande River for a total distance of about 540 miles. 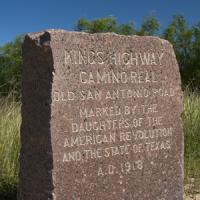 Over the years, the road varied laterally, and in 1915 the Texas Legislature appropriated $5,000 to survey and mark the principal route. The survey was led by V.N. Zively, who studied 18th-century diaries, Spanish land grants, topographical features, and laws of the Republic of Texas to determine the route.

In 1918, the State of Texas, with the assistance of the Daughters of the American Revolution, placed granite monuments every five miles as designated points along the route. In 1949, part of the road was paved and became State Highway 21. In recent years, preservationists have placed Official Texas Historical Markers in some of the 21 counties through which the road passes.

The Commission is composed of representatives from the Texas Historical Commission, the State Department of Highways and Public Transportation, the Texas Parks and Wildlife Department, and the Texas Department of Commerce. Five at-large members also have been appointed by Gov. William Clements.