By A. Elizabeth Brummett, THC State Coordinator for Project Review 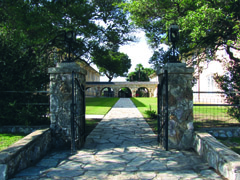 According to TXMF representatives, the effort to rehabilitate Camp Mabry’s historic facilities was rewarded by a renewed sense of pride.

“A historic campus provides a visual representation of the history of the military,” says Chantal McKenzie, TXMF’s architectural historian. “Soldiers feel a connection with the past and pride in working in a place that also supported soldiers through World War I and II."

Recognition of the historic significance of Camp Mabry and THC oversight resulted in a shift in approach to the aging building stock, which required renovation to continue in useful service. While changing military needs drive adaptive use of these facilities, recent projects sensitively treat the historic fabric.

One of the first major projects was rehabilitation of the 1918 infirmary, which restored the exterior by removing an addition and asbestos siding, while adapting the interior for use as officers’ quarters. Recently, Camp Mabry received the Travis County Historical Commission’s first Award of Merit for its rehabilitation of two 1918 barracks. Current work includes the rehabilitation of a 1941 warehouse and reconstruction of a World War I temporary workshop associated with the School of Automobile Mechanics.

While undertaking these projects, representatives of the TXMF’s Cultural Resources Management Office have made a point to educate their colleagues in the Construction Facility Management Office about cultural resources requirements.

“Education makes historic preservation relevant to the audience,” says McKenzie, noting that in addition to the strong sense of place imparted by historic facilities, “these projects support other goals, including sustainability objectives. It’s important to build an argument for rehabilitation versus replacement.” 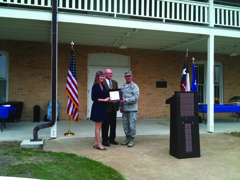 The terms Section 106 and State Archeological Landmark are well known in Texas’ preservation community, but they can sometimes be misunderstood by those who are unfamiliar with the origins, application, and benefits. In the late 1960s, two related forces—damage to significant historic sites and the burgeoning American preservation movement—led to state and federal laws safeguarding historic properties. The National Historic Preservation Act of 1966 was enacted in response to major government construction projects, like the interstate highway system and urban renewal, proceeding without regard for their impact on historic communities and archeological sites.

One of the most important provisions of this law, Section 106, establishes a process ensuring historic properties are given due consideration during planning for federal projects or those that receive federal funds, licenses, or permits.

The Antiquities Code of Texas requires project review prior to ground-breaking on state or local public land and establishes the State Archeological Landmark designation for significant historic and archeological sites.

The THC acts as a consulting party under Section 106 for projects in Texas, and is responsible for implementing the Antiquities Code. Under both laws, staff reviews approximately 15,000 projects a year and plays a critical role in advocating for historic properties throughout the state.