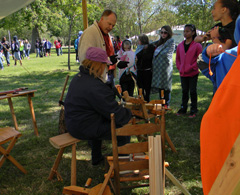 The annual Friends of the Confederate Reunion Grounds living history and reenactment event, held the third weekend of April each year, has become a signature Civil War event in Texas. This year marked the 19th year in a row that Confederate Reunion Grounds State Historic Site hosted the event for fellow reenactors and provided an educational experience for students and families.

As the Friends group’s biggest fundraiser of the year, a year’s worth of preparation by volunteers and site staff culminated for educational programming at its best, including lots of cannons and black powder, camels, Confederates (and an equal number of Federals), and some really good food! 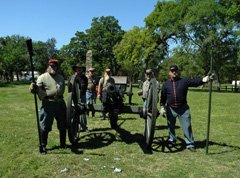 School Day 2013 included public, private, and home school groups. The day started out cool from rain and storms the day before, but proved to be “not too hot” by the end of the day. Learning stations included 19th-century skilled crafts, such as chair-making and woodworking that could have occurred in a Civil War era army camp. 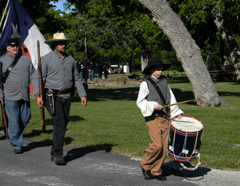 Following tradition, the annual event opened with a parade, the raising of flags, and firing of cannons to commemorate the post-Civil War veterans—both North and South—who formed the associations for the Grand Army of the Republic and the United Confederate Veterans. These groups ultimately became “Agents for Change” to begin a movement to provide benefits not available to them for future veterans and their dependents and survivors. 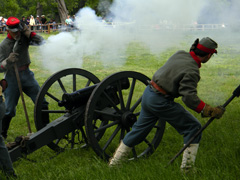 The battle reenactments on Saturday and Sunday afternoons were the highlight of the event. Approximately 350 reenactors, young and old, supported this year’s event. At the end of the battle, families returned to their camps to enjoy social activities and visit with the public. 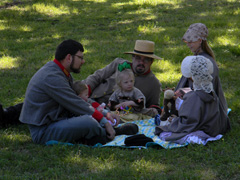 Finding cool shade underneath the giant bur oaks, families spread blankets for rest time after the battle and before evening social events. Girls—teenage and youth— found time to braid their hair and tuck in wildflowers in preparation for the ball. 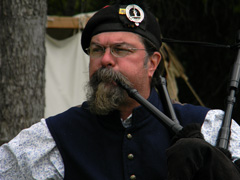 The Family Days on Saturday and Sunday were packed with learning opportunities to be enjoyed by all. Civilian camps included foodways and fiber exhibits and demonstrations with living historians to answer questions. Musicians under the trees provided a respite for those who needed a moment to sit and relax to 19th-century music. Or for those interested in military history, living historians were available for a range of topics, from up-close artillery inspection to the 79th New York Militia, where kilts are part of the uniform and bagpipes used in battle.

The event offered more than just “black powder” for reenactors and the public. A ladies’ tea and presentation on a period topic was held on Saturday morning. Led by Stephanie Ford, “The Women’s War: Survival on the Southern Home Front” was this year’s theme. 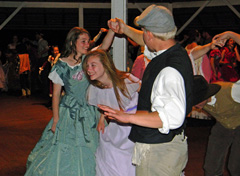 The Saturday evening ball held beneath the historic 1893 Dance Pavilion, which is listed on the National Register of Historic Places, is one of the best for Civil War period events in Texas. It is also the area’s home school association’s spring prom, so youth participation is strong, with students taking the Grand March off the pavilion to snake around the exterior so everyone can participate. Students spend the year researching and making their ball attire, and their energy lasts until the midnight call for all youth who enjoy period dancing. Sweet Song String Band provided the music and dance calls for the evening. 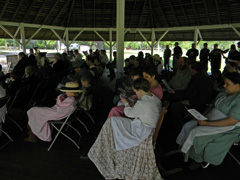 On Sunday morning, everyone is up early for worship services beneath the historic pavilion. A social time for refreshments is followed with song service accompanied by the Heritage Brass Band and sermon. It was standing room only for this year’s worship service.

All funds raised by the Friends are used for preservation projects and educational and interpretive programming and events at Confederate Reunion Grounds. Proceeds raised from this year’s annual event provide support to the Friends main project for 2013, which is redesigning the area around “Old Val Verde,” an iconic cannon at the site. The Civil War-era cannon will receive new interpretive panels, ADA-accessibility, and a new metal carriage. Additional history for Old Val Verde can be found on the Confederate Reunion Grounds website. 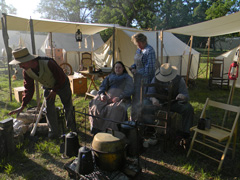 Visit the Friends of Confederate Reunion Grounds Facebook page for additional photos of the event, along with a video of the Texas Camel Corps “under fire.”

Next year’s event has been moved back a week due to the Easter holiday. Mark your calendar for April 11-13, 2014, and watch our events web page for information and a schedule of events.