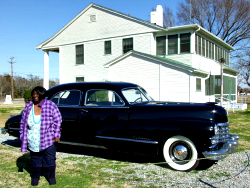 Charlie Phillips worked as a caretaker at the Rayburn farm beginning around 1939. Bobbie Erskine began working on the farm as the family’s cook in 1933. They married in 1940 and moved into the caretaker’s residence on the Rayburn farm. While living on the farm, Charlie and Bobbie were joined by Bobbie’s granddaughter Barbara Ross, and later her grandson Joe Dale, his mother Emma Belle Givens, and his sister Minnie.

We were fortunate to be able to conduct oral histories with both Barbara Ross and Judge Joe Dale prior to our 2016 African American History Month celebration. Barbara recalled stories of life on the farm helping her grandmother with chores and her relationships with the Rayburn family. One such memory was her job to keep the Rayburn’s chickens out of the flowerbeds at the house during special occasions and receptions. She recalled picking cotton on the farm and Charlie Phillips weighing the cotton as it was picked. She also spoke of “Mr. Sam” giving her a ride to school in his Cadillac. Barbara attended the segregated Booker T. Washington School in Bonham. Her school friends were envious of her chauffeured ride to school and the delicious homemade lunches her grandmother packed for her.

Judge Dale recalled as a young boy singing songs to raise the spirits of Sam Rayburn’s bedridden brother-in-law S.E. Bartley. He also recalled a room in the house that held all the gifts “Mr. Sam” received from friends and admirers. Those gifts once included a fruitcake that arrived in a large, galvanized steel washtub. Judge Dale served as an usher at the Rayburn’s home during a reception following the dedication of the Sam Rayburn Library in 1957. At that time, his mother, Emma Belle Givens, was working at the Rayburn home as the cook. She took over the position after his grandmother, Bobbie Phillips, passed away in 1956.

Both Barbara and Judge Dale spoke of Bobbie and Charlie moving from the caretaker’s cottage on the Rayburn farm into their own house on North Cedar Street in Bonham around 1950. According to Barbara, Rayburn bought the house for her grandmother and step-grandfather. Judge Dale recalled that when they moved into the house it didn’t have plumbing, so Rayburn had it added for the comfort of the family.

The African American History Month celebration at the Sam Rayburn House State Historic Site took place on February 5. Along with a great group of visitors, we were also joined by Barbara and members of her family. Barbara took time during her visit to pose for a photo next to Sam Rayburn’s 1947 Cadillac Fleetwood, the same car he had used to drive her to school.