Celebrating Life on the Farm

Another enjoyable Farming Heritage Day was held at the Sam Rayburn House Museum. The event, which took place on Saturday, September 20, included many agricultural-themed activities for both children and adults. 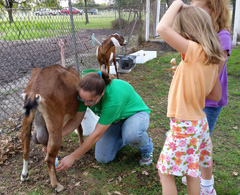 What is Farming Heritage Day without vintage tractors? The event included vintage John Deere tractors and “hit or miss” engines pumping water and grinding corn. The vintage machinery was on display courtesy of the Wylie Antique Machinery Society.

The Future Farmers of America (FFA) also had a big presence at the event. FFA students from the Bonham, Fannindel, and Sam Rayburn school districts all took part. The Fannindel students wore the official FFA dress uniform and gave a presentation of the FFA motto and creed. 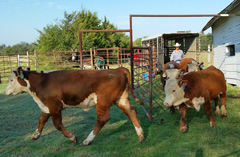 The Doyle Hereford Ranch of Wolfe City brought yearling Hereford bulls for the event. Sam Rayburn raised Hereford cattle on both his farm in Bonham and his ranch in Ivanhoe. As part of the day’s activities, visitors competed in a Hereford bull-judging contest.

Visitors made ice cream, butter, corn husk dolls, and yarn crafts. Ears of corn, samples of sorghum, cotton, oat, and hay seeds were part of a “touchable” display courtesy of the Agronomy Lab at Texas A&M University–Commerce. Visitors picked cotton from the cotton bolls, tested the fluffiness, and picked seeds from the cotton. They even had the opportunity to plant their own cotton, corn, onions, and pinto beans. 4-H members gave a wool carding and spinning demonstration. 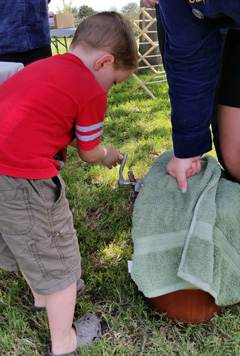 Tours of Mr. Sam’s home during Farming Heritage Day were based around the theme of electrification on the farm in 1935. Tour guides spoke of life on the Rayburn farm before electricity was added and how the addition of electricity changed life for the better in the home and when doing chores on the farm.

Everyone enjoyed free popcorn, hotdogs, and homemade ice cream and butter. Brookshire’s Grocery and the Friends of Sam Rayburn supplied refreshments for the event.

Farming Heritage Day is held annually at the Sam Rayburn House Museum. If you were not able to join us this year, make plans to join us in September 2015!