While the majority of National Register properties in Texas are buildings, several recently designated sites focus primarily on cultural landscapes. These listings include a historic cemetery and golf course, and historic trails reflecting dramatic changes in transportation between 1800 and the early 1940s.

Read more about these nominations and others on the THC's National Register page. 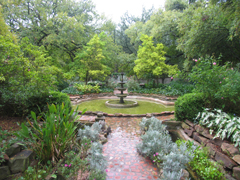 Chandor Gardens is a five-acre estate west of Fort Worth that was the home and studio of English-born portrait painter Douglas Chandor and his wife Ina. Born in 1897 and trained at the Slade School in London, Chandor came to the United States in 1926 and continued a successful career as a portrait painter for financiers, industrialists, educators, and other prominent people, including Herbert Hoover, Franklin Roosevelt, Queen Elizabeth, and Winston Churchill. The estate features a 1936 residence and studio designed by Fort Worth architect Joseph Pelich, and lush Asian and English-inspired formal gardens designed and executed by Chandor up to the time of his death in 1953.

The Broadway Cemetery Historic District is composed of seven separate cemeteries on six city blocks set aside for family burials as part of the original town charter in 1839. A vast collection of monuments, vaults, and stone markers punctuate the overall landscape and range in style from simple marble and granite headstones to impressive Classical Revival vaults, Gothic Revival mausoleums, and towering obelisks.  The organization and layout of the site, as well as tombstone decoration, symbolism, and inscriptions, provide documentation of the traditions and beliefs important to residents of Galveston.

Hancock Golf Course was the first location of the Austin Country Club, established in 1899 during a national rise in the popularity of golf. The ninehole course was the first in the city, and is the oldest continuously operated course in the state. Founded by former Austin Mayor Lewis Hancock with a committee of business and civic leaders, the country club added nine holes on a separate parcel in 1913 and continued to operate the course as a private segregated facility until 1951, when the organization completed a move to a new location. The City of Austin thereafter operated the course as a public facility, selling off all but the original nine-hole course for commercial development in 1959. The course played an integral part in the introduction and popularity of golf in Austin and retains its historic layout. 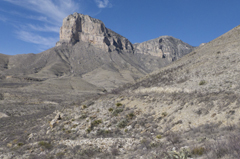 The Butterfield Overland Mail Route Corridor is within and adjacent to the boundaries of Guadalupe Mountains National Park. While the district is named after the most famous period of use for the corridor, it is composed of multiple road alignments and related sites from the mid-19th to mid-20th centuries. The corridor came to the attention of U.S. Army surveyors and emigrants after the signing of the Treaty of Guadalupe Hidalgo and the discovery of gold in California in 1848, quickly becoming an important southerly route to the West. The road was adopted for U.S. mail service in 1857 as a segment of the Butterfield Overland Mail route from St. Louis and Memphis to San Francisco. Following the Civil War, Buffalo Soldiers patrolled the region and helped usher in the rise of ranching and private land ownership. By the early 20thcentury, improved roads were constructed next to and on top of the older alignments, creating a reliable automobile corridor.

The Pérez Rancho Site and the Dolores Crossing are within the Medina River Natural Area, and include a jacal dwelling, the river crossing site, and the Pérez family cemetery. Pérez Rancho was one of the first Spanish colonial-era ranchos established along the Medina River, strategically located near San Antonio and several roads associated with El Camino Real. Juan Ygnacio Pérez, a grandson of one of the original Canary Island immigrants to San Antonio de Bexar, was a successful military and political leader at the frontier outpost, and made the Pérez family one of the most influential and wealthiest in Spanish Texas. The Dolores Crossing is significant as a ford on the Medina River. This nomination was one of several initiated and funded by the National Park Service under the El Camino Real de los Tejas National Historic Trail multiple property form. 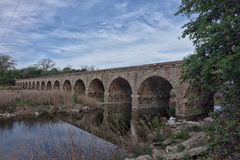 The nominated 8.4-mile segment of State Highway 16 in Palo Pinto County runs east of Possum Kingdom Lake, located 90 miles west of Fort Worth. Constructed between 1940 and 1942, the section was part of a longer 27.75-mile-long Works Progress Administration project. As the first all-weather transportation facility in the area, the road connected the Morris Sheppard Dam and the eastern shores of Possum Kingdom Lake to major roadways. The nominated segment demonstrates exceptional hand-labor workmanship and engineering through its masonry culverts, guard wall, and the Possum Kingdom Bridge over the Brazos River, which stands as the longest and most substantial masonry arch bridge in Texas. This nomination was prepared by the Texas Department of Transportation under the recently completed Historic Road Infrastructure of Texas multiple property form.

The National Register of Historic Places is the nation’s official list of cultural resources deemed worthy of preservation, and includes more than 3,000 listings in Texas. Listing affords properties a measure of protection from the impact of federally funded projects, as well as access to technical expertise and grant funds to facilitate preservation. Income-producing properties are also eligible for tax benefits for sympathetic rehabilitation work.

This article was originally published in the Summer 2015 issue of The Medallion.

I'm very disappointed that the Stimson Family Cemetery which was on 2 acres of the farm of Isaac and Rachel Stimson has been plowed under with the graves still intact. Some of the headstones were moved to a Lavon Cemetery at Hwy. 380 and Hwy 78.
The cemetery was to remain but the person who bought the property yesrs later did not honor that request. Ridgeview Street was being widened and go directly over the graves. It may have already taken place.
Isaac and Rachel Stimson were my great-great grandparennts.

The THC’s Historic Cemetery Preservation Program can help you record the location of the cemetery. You can do this with a Notice of Existence of Cemetery form, which can be filed in the Collin County Clerk’s office. The THC would also work with the Collin County Historical Commission to be sure that the location of the graves is protected from future development. Before completing the form, please contact our Historic Cemetery Preservation Coordinator Jenny McWilliams at jenny.mcwilliams@thc.texas.gov.