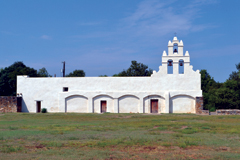 Nearly 100 years ago, the Meridian International Road Association published The Meridian Road in Texas, a travel guide promoting the state’s newest highway. The Colp Guide, as it soon came to be known, was named after David E. Colp, the self-described “apostle of Good Roads” who served as president of the Meridian Highway Association’s Texas Division.

Colp also served as secretary and president of the Texas Good Roads Association and was crucial in the creation, development, and promotion of the state’s portion of the Meridian Highway, Old Spanish Trail, and Glacier to Gulf Highway. Today, Colp’s research still assists the Texas Historical Commission’s (THC) Texas Historic Highways Program with the Meridian Highway project—a comprehensive initiative to document the road billed as North America’s first international highway—named after the sixth principal meridian it roughly follows from Canada to Mexico City.

In 1915, Colp and his traveling party journeyed the Meridian Highway’s nearly 600 Texas miles from Burkburnett to Laredo, as well as the Gulf Division of the highway from Waco to Galveston, recording sights, landscapes, history, and the road itself. The resulting travel guide provided an early map that depicted the route and the cities along its path, representing the state’s oldest detailed illustration of the highway.

The guide calls out local landmarks, such as county courthouses and city halls, hotels, garages, and tourist destinations for early automobile enthusiasts. The map notes mileage between cities and distances between important turns along the route.

Short promotional descriptions of key cities along the route highlight their distinguishing histories and qualities in a whimsical fashion, such as the “magic waters” in Marlin, the watermelons in both Melon and Weatherford, the death of outlaw Sam Bass in Round Rock, and Wichita Falls’ “great artificial lake, where the fish are as big as whales and so tame they will almost eat out of your hand.”

These descriptions, under kitschy alliterative titles—“Decatur Not Decaying,” “Salado Sips Sulphur,” “Devine Divinely Delightful,” and “Hempstead Has Heavy Harvest”—encouraged motorists to stop, see, and explore. The guide was a promotion for the road, the cities, and the state of Texas, promising that travelers on the Meridian Highway would be privy to Texas’ “history; limitless scenic wonderland; untold hunting and fishing; captivating climatic conditions; fabulous virgin mineral wealth; and boundless industrial and commercial possibilities.”

One hundred years after Colp and company traversed the state north-to-south on the Meridian Highway, the THC is following in their footsteps, or rather tire tracks, documenting the road and its associated historic resources for today’s travelers. In addition to the original Meridian route traveled by Colp, today’s team is also following the 1924, 1940, and 1960 alignments.

The quaint, undeveloped stretches of the Meridian Highway as observed by Colp still exist in places—as in between Alvord and Decatur in Wise County. In addition, some of the travel attractions highlighted in the guide remain notable heritage tourism destinations, including the missions in San Antonio, Fort Richardson in Jacksboro, and Cameron Park in Waco. 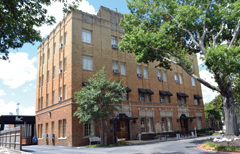 Additionally, as automobile travel increased after Colp’s trip and new alignments of the highway developed, more tourist attractions and businesses catering to motorists opened. Many have since become destinations in their own right, such as River Crest Park in Glen Rose, “Automobile Row” in San Antonio, and the Faust Hotel in New Braunfels.

The Meridian Highway today, though undoubtedly hosting more traffic, gas stations, and food and lodging options than Colp experienced, represents the vastness and beauty of Texas, with its bustling cities, impressive skyscrapers, courthouse squares, landscapes of oil derricks and pump jacks, rolling hills, and cotton fields that the Colp Guide so eloquently highlighted. For those making the journey along the historic Meridian Highway, these remain sights to behold.

The Meridian Highway project is funded by a transportation enhancement grant awarded to the THC from the Federal Highway Administration and administered by the Texas Department of Transportation. The THC awarded a contract to Hardy-Heck-Moore, Inc., an Austin-based historic preservation firm, which also undertook the recently completed Bankhead Highway project.

For additional information about the project and the Texas Historic Highways Program, visit our Historic Texas Highways webpages, or contact Leslie Wolfenden at 512-463-3386 or leslie.wolfenden@thc.texas.gov.

This article was originally published in the Winter 2016 issue of The Medallion.