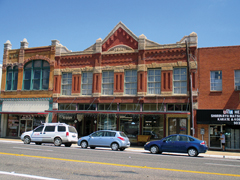 Even though the acronym CLG is used in many of Texas’ historic preservation circles, not everyone knows what it means. But they should.

The Certified Local Government (CLG) program is a significant starting point for Texas municipalities interested in sustaining a preservation ethic in their communities; this local, state, and federal partnership supports preservation goals by offering technical assistance and financial grants.

CLG requirements include a strong preservation ordinance, a historic preservation officer, and a historic landmarks review commission with the authority to review proposed alterations to landmarked properties. By offering technical assistance to CLGs and potential CLGs, the Texas Historical Commission (THC) establishes close working relationships with a diverse range of communities across the state.

Texas currently has 73 CLG communities, and all are eligible to receive training, assistance with ordinances and bylaws, preservation recommendations, and more. The THC’s CLG program has two full-time staff members who answer questions and provide support.

CLG communities are also eligible to apply for preservation grants. Texas receives an annual appropriation from the federal Historic Preservation Fund, and at least 10 percent of that funding goes directly to the CLGs in the form of grants.

For example, Comal County has taken an active role in surveying and designating its historic resources since joining the CLG program in 2001. Using a series of CLG grants, the county was able to develop a plan for a phased countywide survey for all historic resources constructed prior to 1945. 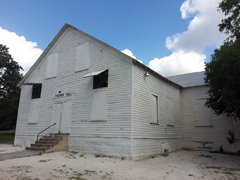 Currently, the county is using a CLG grant to prepare a National Register nomination for the community of Fischer, which was settled in the 1850s. The small community 50 miles north of San Antonio contains many distinctive historic structures, including the circa 1902 Fischer Store, circa 1895 Fischer Dance Hall, a Victorian house, a nine-pin bowling alley, and an extensive agricultural complex with remarkably intact resources such as a smokehouse, cistern, outhouse, and barn.

In 2013, the City of Palestine used a CLG grant to survey its downtown district. The survey was produced in-house by the historic preservation officer and volunteers from the community, who provided photographs and did much of the legwork in the field. This was an alternative to the traditional method of hiring a historic preservation consultant to conduct the survey.

Palestine’s project updated an existing 1993 survey and documented more than 80 downtown resources, including the Lucas Hardware Building, a 1901 Romanesque Revival structure with a façade that had previously been obscured by a mid-20th century brick slipcover. The 2009–11 restoration of the building removed the slipcover and exposed the building’s rusticated stonework and transomed storefront.

For more information about the CLG program and its grant application process, please visit thc.texas.gov/clg or call Kristen Brown at 512-463-7812.