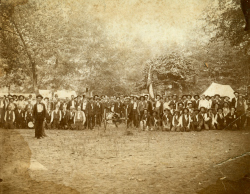 The presentation of mock battles or reenactments dates back to the Civil War, when spectators brought picnics to watch mock or real battles from the sidelines. Watching real battles for entertainment might seem strange to us today, but it was a common enough practice at the time of the Civil War. Accounts tell of civilians, senators, and picnicking families coming to watch the First Battle of Bull Run at Manassas, Va. When the battle broke out beyond the battlefield, the spectators were forced to flee, seeing that this war would be no picnic after all.

Reenactments were also staged as a means of training new recruits and as a form of patriotic entertainment for the folks back home. After the war, veterans were sometimes persuaded to participate in mock battles to remember their wartime experiences, reconnect with comrades, and put on a patriotic display in their old uniforms.

When veterans started holding reunions at the Confederate Reunion Grounds in Mexia, the men would wear their uniforms, listen to patriotic speeches, enjoy food and fun activities, and fire the old Val Verde Cannon at dawn and dusk each day of the reunion. Although no Civil War battles were fought in Central Texas, three out of every four free men in Limestone County served in the Confederate Army, and these reunions were an important social gathering. While records do not seem to suggest that mock battles ever occurred at the Confederate Reunion Grounds, the spirit of remembering the past is a common thread connecting the veterans’ reunions to the Civil War reenactments today.

There was at least one record of a mock battle held by the Confederate veterans at the Josephe E. Johnston Camp 94, UCV (Confederate Reunion Grounds SHS). If I remember correctly, it was a reenactment of the capture of the Old Val Verde cannon at Mansfield, LA. I will look in my research files to see if I can find the source of this record.