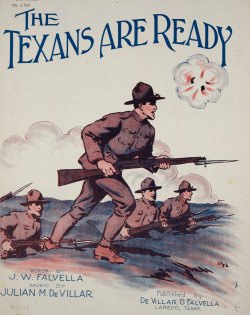 World War I was a turning point for the U.S., including Texas. However, the Lone Star State was intimately engaged in war preparations prior to the U.S.’ declaration of war on Germany on April 6, 1917. Beginning in 1914, livestock from around the state were shipped to Europe for the war effort. Wood from East Texas, cotton from across the state, and oil from Spindletop were shipped out of Galveston and the Houston Ship Channel. Texas businesses supplied these resources and more, while many Texans volunteered to aid the Allies between 1914 and 1917.

Texas continued to be faithful to the war effort after the official declaration. Approximately 200,000 Texans served in uniform during World War I—many receiving medals of honor, the French Croix de Guerre, and aviation aces. Of those in uniform, 5,171 lost their lives in service to their country. In addition to uniformed soldiers from Texas who served, many of the state’s citizens—mostly women—served as nurses, Red Cross volunteers, and switchboard operators in France. The war also brought about the first national effort to enlist civilian communities to conserve resources, buy war bonds, and otherwise contribute to the war effort. The contributions of Texas minorities, often overlooked for much of the rest of the century, were especially notable. More than 31,000 African Americans from Texas served in the U.S. Army during the war, as well as many of the state’s Mexican Americans and American Indians.

The Commemoration of Texas and Texans in the Great War

In 2015, volunteers took up the challenge of planning the commemoration of Texas and Texans in the Great War, eventually organizing the Texas World War I Centennial Commemoration Association (TXWWICCA), an unincorporated nonprofit association with the goal of communicating, coordinating, and commemorating World War I in Texas. By late 2015, the TXWWICCA was established as a commemorative body and the Office of the Governor formally appointed the Texas Historical Commission (THC) as the lead agency tasked with spearheading the state’s activities.

The TXWWICCA, part of the larger U.S. World War I Centennial Commission effort, communicates information about centennial commemoration events to the public using a variety of media. For organizations and groups interested in participating, it provides information, coordination, and planning assistance for commemoration efforts around the state. Some of the activities planned for 2017–19 include educational programs, historical exhibits, symposiums, festivals, restoration of local monuments, marking of World War I veteran grave sites, art exhibits, and a variety of additional projects. Commemorative events are announced on a continuing basis on the TXWWICCA calendar and Facebook page.

Commemoration efforts of the U.S. World War I centennial anniversary will take place throughout April 2017, beginning on April 6—the 100th anniversary of the official U.S. entry into the Great War—and will continue through June 2019, 100 years since the end of the war. Organizations and communities are encouraged to host meaningful commemorative activities during the centennial period using tools and guidelines developed by the U.S. World War I Centennial Commission. In order to aid and promote this grassroots effort, the TXWWICCA provides a list of off-the-shelf activities focusing on what it calls “the Three P’s: Poppies, People, and Places.”

World War I introduced Texans to the world and the world to Texas. Contact the Texas World War I Centennial Commemoration at WWICC.TX@gmail.com for more information on how to commemorate the people and places of World War I that changed your community or organization.