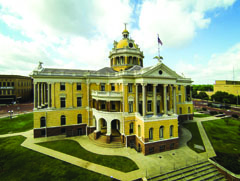 Texas courthouses are among the state’s most widely recognized, used, and valued assets. Their lofty gothic spires, classical copper domes, and stately silhouettes dominate the skylines of many counties, luring travelers to leave the highway and explore historic downtown districts.

The Texas Historical Commission’s (THC) Texas Historic Courthouse Preservation Program (THCPP) is protecting these iconic structures in communities throughout the state. In the process, Texas is providing a cost-effective example to the nation on how to refocus community pride, utilize existing assets, and maximize the return on historic civic buildings in county seats.

The THCPP provides the incentive for counties to invest matching funds to ensure their courthouses will always be inspiring places to work, conduct government business, visit, or simply enjoy. Program participants experience numerous benefits, including building functionality and creating a tourist attraction and tangible link to the past.

Since the inception of the program in 1999, $251 million has been awarded to 91 counties for the preservation of their courthouses. Including the FY 2013 appropriation of approximately $4 million, construction activity related to the program has or will have generated 10,381 jobs, more than $21 million in local taxes, and more than $22 million in state taxes.

To date, 63 county courthouses have been fully funded with the assistance of this program. Eighteen counties have received emergency and planning grants and are awaiting major construction funds to complete their projects. 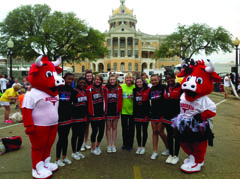 The economic impact has been especially significant in Texas’ rural communities, where courthouses often anchor a historic downtown district, and the associated heritage travelers, who spend almost $400 more per trip than average travelers, bring money to the community.

For many cities, simultaneous participation in the THC’s various preservation initiatives—such as the Texas Main Street Program and Texas Heritage Trails Program—provides a successful outcome when combined with the restoration of its county courthouse.

Other organizations such as the Texas Downtown Association (TDA) also offer considerable assistance. TDA Director Catherine Sak believes a county’s investment in its courthouse demonstrates that the courthouse square plays an important role in the community while instilling confidence in developers who invest in properties following a courthouse restoration.

“A restored county courthouse and square creates an opportunity for the establishment of new businesses and events in the downtown,” Sak says, noting that TDA’s recent award recipients were Amarillo and Granbury, following the full restorations of both county courthouses through the THCPP.

Unfortunately, Texas’ historic courthouses are threatened, and the stories they tell may soon be forgotten unless counties intervene—in some cases immediately. This is often a monumental task for a county to assume on its own. 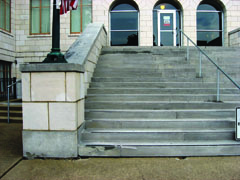 Water intrusion is one of the most common and pervasive threats to county courthouses. As time passes, even the solid construction of buildings meant to last centuries eventually falters without dedicated, consistent maintenance. Foundations leak, soils settle, and masonry deteriorates, as do roofs, windows, and doors.

In Round VIII of THCPP grants (2013) Dimmit, Upshur, and Van Zandt counties applied for funding to address water problems that threatened their daily business and vital records. While emergency grants were available to Dimmit and Upshur, Van Zandt County suffered due to limited THCPP funding, instead having to use its own limited resources to pay for waterproofing its courthouse’s foundation.

In addition, many factors contribute to the threat of fire at historic Texas courthouses. Significant threats include outdated electrical systems, lack of lightning protection, and inadequate fire suppression and smoke detection systems.

“When old records are lost or destroyed, so is our history,” says Mark Wolfe, executive director of the THC. “County records are an important repository of the daily workings of our counties and the state. These records hold not only vital information, but are some of the earliest known histories of Texas.”

Perhaps the worst threats to historic Texas courthouses come from disinterest and misinformation—the false belief that it is easier and cheaper to “build new” and sacrifice a century or more of history and community to a construction landfill. According to Wolfe, it is neither cheaper nor sustainable to raze a historic courthouse and build a new facility with at best a 50-year life, when a historic courthouse can be restored and updated for the 21st century at a fraction of the cost and offer another century of service to the community.

“A city’s involvement in urban revitalization through preservation of its historic town center—particularly when partnered with a county’s restoration of its historic county courthouse—provides the vital link for a prosperous downtown,” Gilbert E. “Pete” Peterson, III, THC chair says. “All across Texas, we’ve seen it happen in counties that have joined the program to restore their beloved courthouses. They have made truly remarkable transformations.”

The most recent funding for Round VIII of the THCPP was included in the appropriations bill of the 83rd Legislature in 2013, approving the sale of $4.2 million in bonds, the smallest amount appropriated for the program since its inception. Subsequently, a total of 24 applications were received requesting more than $7 million in state assistance. The THC submitted an exceptional item request to the 84th regular session of the Texas Legislature for $40 million in funding for the program.

The THCPP can be the catalyst that encourages additional public and private investment in historic downtowns. Vacant buildings often exist in the central commercial district when a courthouse project begins, but vacancies dwindle by the project’s completion.

“The preservation of Texas’ historic courthouses is an investment that offers immediate returns, yet continues to pay generous dividends to the citizens of tomorrow,” says Sharon Fleming, director of the THCPP. “There are few places that can strengthen and transform an entire community, but a restored cherished courthouse truly will.”

This article was originally published in the Winter 2015 issue of The Medallion.