The Copper Lilies at Caddo Mounds: A Serendipitous Tale 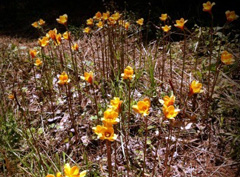 It is a fairly safe bet that following a rainstorm there will be a new treasure of blooms at Caddo Mounds State Historic Site. Earlier this week, I stumbled across a sunny patch of copper lilies (pictured at right). These beauties cropped up in close proximity to a 1920s-era barn near our main road segment of El Camino Real de los Tejas. Seeing these lilies so close to the barn had me wondering if they were one of the blooms that help archeologists spot historic home sites. I bounced this thought off my archeologist husband and got a "probably not." There are plenty of flowers that are known for marking historic house sites, but apparently not the copper lily. 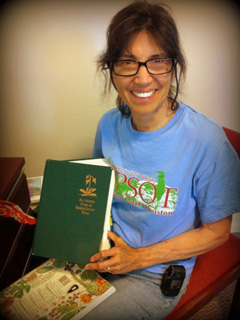 Lately, we've been fortunate to have volunteers from the Native Plant Society of Texas (NPSOT) and the Texas Master Naturalists exploring our site and identifying plants. Every time they are on site I learn something new and interesting. After hours of identifying plants around the borrow pit, Sonnia Hill with NPSOT sat behind my computer and helped classify all of the plants I have been photographing on my daily wanderings around Caddo Mounds. Sonnia loved the copper lilies, but she agreed with my husband that they were more wild than cultivated. She thumbed through her giant, plant book so I could write down the copper lily's binomial (habranthus tubispathus), and came across the following information: “Holmes and Wells (1980) proposed that this species is native to South America and was introduced in the U.S. in the late 1600s or early 1700s possibly by Spanish missionaries.”

Recall that the historic barn is adjacent to our swale of El Camino Real de los Tejas. If you were to follow the Camino Real six miles west you would arrive at the site of the first Spanish Mission in East Texas: 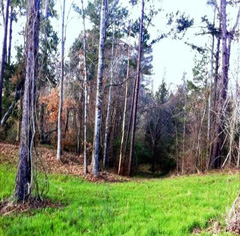 Also, the Caddo Mounds area was known by the Spanish as a paraje, or perpetual campground, a welcome high, dry spot to rest following a perhaps muddy and difficult crossing of the nearby Neches River.

Another interesting tidbit: Father Margil, a Franciscan friar and friend of the Espinosa party who established Mission Tejas, spent much time in Central America and East Texas. Stories of the miraculous work of Father Margil are folk legend around East Texas, especially in Nacogdoches where this historical marker resides along the Lanana Creek Trail. 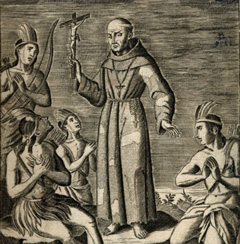 "Los Ojos de Padre Margil" (The Eyes of Father Margil) – A Franciscan missionary who spent almost 50 years with the Indians of Central and North America, Father Antonio Margil de Jesus (1657-1726) was born in Valencia, Spain, and came to the New World in 1683. He founded three Catholic colleges before joining the Domingo Ramon Expedition to East Texas in 1716. He established three missions in this region, including Nuestra Senora de Guadalupe at present Nacogdoches. A severe drought, which began in 1717, ruined crops and caused many Indians to leave the mission. In the summer of 1718, according to tradition, Father Margil was led by a vision to a point near this site where the bed of La Nana Creek made a sharp bend. There he struck the overhanging rock shelf with his staff, and a stream of water gushed forth. Some accounts say that he made two openings in the rock, which became known as "The Eyes of Father Margil." This miraculous event inspired the Indians, and a relief expedition later found conditions at the mission greatly improved. In 1720, Father Margil founded Mission San Jose y San Miguel de Aguayo in San Antonio. He died in Mexico City. "The Holy Spring," now dry except during very rainy weather, symbolizes the faith and endurance of the Spanish missionaries.

In reality, these puzzle pieces of knowledge may never fit together, but it is intriguing to imagine the ancestor bulbs to our copper lilies arriving at Caddo Mounds in the robes of Father Margil—perhaps on a trip to visit his friend Espinosa.

Caddo Mounds State Historic Site is located outside Alto, Texas, 26 miles west of Nacogdoches. The site is part of the lush Pineywoods landscape of the Texas Forest Trail Region.