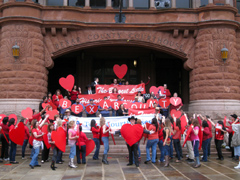 Imagine packing your bags and taking five days to visit 13 courthouse gems in Texas. That’s just what staff from the Texas Historical Commission (THC), Preservation Texas and the National Trust for Historic Preservation did starting on January 22 when they visited courthouses in Williamson, Llano, Lampasas, Mills, San Saba, Goliad, Dewitt, Karnes, Bexar, Atascosa, and Wilson counties, not to forget the rededication ceremonies of the Comal and La Salle county courthouses finishing their restorations.

The whirlwind tour kicked off the “I Love Texas Courthouses” campaign, a month-long celebration of Texas’ historic courthouses. The campaign epicenter is www.ilovetexascourthouses.org, where anyone (including you) can upload photos and personal stories of their favorite courthouses.

You might expect these grand public buildings with their brick and stone walls, ornate carvings, domes, and towers to be the main attraction, captivating and inspiring everyone on the tour. What really stole the show, however, was the outpouring of support and admiration that locals have for their courthouses. Each stop turned out to be a celebration unto itself, where hundreds of residents gathered at their courthouses, holding hearts in their hands. It was a love fest that demonstrated how important courthouses are to their communities, how their meaning stems from how people live around them, work in them, get married in their graceful rooms, play on their steps and lawns, and build memories with the courthouse standing tall as the backdrop.

All the recent visits to the courthouses were memorable; here are just a few highlights. 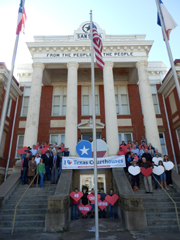 The San Saba County Courthouse, built in 1911, is punctuated by its four doric columned entrance, grand cupola, and “From the people to the people” carved in the entablature. San Saba is one of the courthouses on the tour that has not yet received a full construction grant from the Texas Historic Courthouse Preservation Program (THCPP), but the locals are working hard to make that a reality. Bess Graham, a project reviewer for the THCPP, was struck by the passion the residents have for their courthouse, as well as the solidarity she found between San Saba and the counties surrounding it: “As we toured the counties next to San Saba, they all said ‘You really need to fund San Saba!’ When we got to San Saba for the tour and photo shoot, a contingency from adjacent Mills County, including the county judge and commissioners, showed up in support. Mills County is actually serving as a mentor to San Saba for their application to the program.”

David Williams, chair of the San Saba County Historical Commission, as well as the Courthouse Restoration Association, organized the tour and a special luncheon with less than a week’s notice. More than 50 people graced the steps of the courthouse to show their love, including the San Saba county judge, the city manager and mayor, elementary school kids, and the officials from Mills County. San Saba County Judge Byron Theodosis summed it up best: “In San Saba County, we are old-fashioned. We see the courthouse as the heart of our county. And just as with our physical bodies, when the heart is healthy, so is our society.” 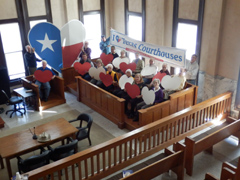 Cue music, dancing and lots of hearts! This was the scene in front of the 1896 Romanesque Revival courthouse, designed by J. Riely Gordon, in Bexar County. San Antonio supporters get the spirit award, as they danced in a flash mob at the courthouse steps. Even the county architect was dressed up as a heart! 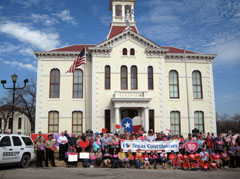 Wilson County Courthouse, one of the last stops on the tour, pulled at the heartstrings of the visitors and residents alike. Susan Gammage, Assistant Director of the THCPP, said: “It was Wilson County that brought tears to my eyes. We had just finished lunch and exited the café to see 200 or more people standing out in front of the courthouse. There were kindergartners, the Sheriff’s Department, Representative John Kuempel, the VFW and Rotary Club, together showing their support for the vacant building.” Since closing down the courthouse in October 2012 and moving county offices to an annex building, Wilson County Judge Marvin Quinney personally led the tour of the 1884 courthouse, one of the oldest in the state, and discussed plans to restore it.

Texas is fortunate to have such a rich collection of historic courthouses at the heart of counties across the state, and even more fortunate to have people who understand the importance of these buildings and actively care for them in their communities. To all the supporters of courthouses in Texas, thank you, from our hearts to yours!

Im trying to find information about the state program that provided the funding to construct the original historical county courthouses featured on a Houston PBS Texas Historical show 6 or so years ago. I saw the show after realizing myself that their was stark similarity among those I had come across. I just love them!

The Texas Historic Courthouse Preservation Program has been providing grants to counties to restore their historic courthouses since the program was established by the 76th Texas Legislature in 1999. For more information, please refer to the program's web pages at the link above, or call the Division of Architecture at 512.463.6094 to be referred to a courthouse reviewer in your region.