The Curious Case of Camptown Cemetery 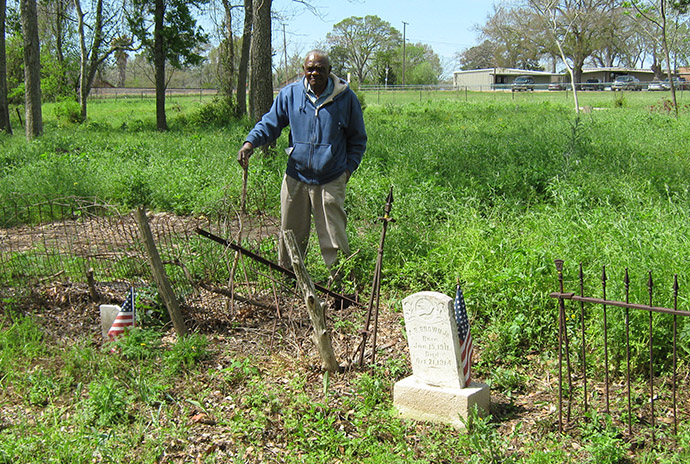 Eddie Harrison arrived in Washington County in 1955 to serve as the county extension agent. He later served as a state farm specialist and USDA livestock specialist before culminating his civic career in Texas as Brenham’s municipal court judge for 16 years.

Harrison believed the best way to serve the public was by getting to know them. He soon learned, however, that not all his constituents were among the living. In fact, he would soon become their biggest proponent in telling their stories.

The lasting legacies of a person, group, or community are often found in cemeteries, which are more than just final resting places. Grave markers stand as the physical representations of their histories. But how can something so endearing disappear?

Sometimes, cemeteries are lost because the caretakers may no longer have the means to manage the site. Other times they are lost through the forces of nature or perpetual neglect. For Brenham’s Camptown Cemetery, a combination of the two hid the grounds from the public eye, much like the site initially hid runaway slaves during the antebellum period. 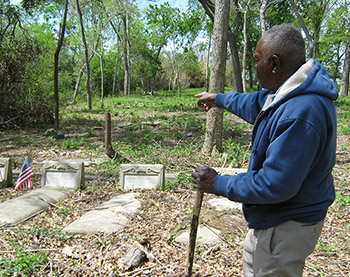 Thousands of Texas cemeteries share an unfortunate commonality—unintentional neglect—which appears to be the reason for Camptown Cemetery’s disappearance from the public record. Weeds and shrubs grew over and buried the grave markers and surrounding area for decades.

In the 1970s and ‘80s, urban revival in Brenham resulted in a sizeable growth in housing development. As suburbs stretched into previously underdeveloped lands, residents rediscovered the abandoned Camptown Cemetery. They called upon the municipal government to clean up the cemetery, but achieved mixed results until a reorganized, concerted effort in 2007 began preserving the remnants of the grounds for the public’s memory.

A group of descendants and members of a local church worked with the Washington County Historical Commission to designate the land as a Historic Texas Cemetery (HTC) in 2009. The Texas Historical Commission's Cemetery Preservation Program administers the designation and offers technical assistance to concerned citizens as well as local and regional organizations with their cemetery preservation efforts.

“Our program records and protects historic cemeteries across the state through county deed records and public awareness,” says HTC Program Coordinator Jenny McWilliams. “Participation can lead to a long-lasting and robust preservation effort, which is something Camptown’s supporters were organizing.”

During and after the HTC process, clean-up efforts began clearing aside decades of overgrown foliage. Harrison’s efforts, including a “call to action” letter and newspaper campaign, galvanized volunteers to see the value in preserving the site through clean-up efforts.

His plea reached volunteers from all different backgrounds, including descendants of those buried there, local residents, motorcycle clubs, and students from Texas A&M University. The university also advised Harrison on how to permanently remove invasive foliage while maintaining the integrity of the grounds.

“We need to take control of the cemetery as a part of our outreach,” Harrison says. “It’s a place we revere now to keep the peace and tell the story of the people.” 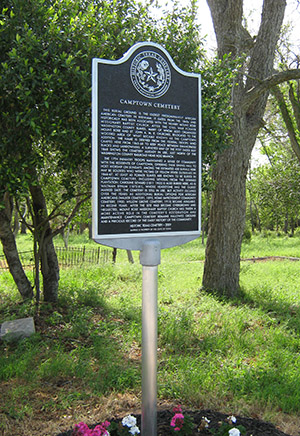 The role of public memory

When Harrison first arrived in Washington County, one of his initial goals was learn about local history by having conversations with people and listening to their stories. There are no known documents to support the origins of the cemetery, but regional interpretation cites 1850 as the earliest known reference to the area now known as Camptown.

Located between two creeks just east of downtown Brenham, the brush initially offered protection for runaway slaves. Evolving into a refuge, the African Americans hiding there lived off the land and gained subsistence employment from nearby Brenham residents in need of laborers. In time, the people established a cemetery there.

Oral traditions provided Harrison with valuable information concerning the origins of the cemetery. However, he did not rely solely on stories passed down from one generation to the next. He researched the recorded history of the area and learned about the origins of the name “Camptown.”

Harrison discovered that in 1866, a local newspaperman stirred up conflict between plantation owners and freedmen. Federal troops arrived to maintain order and protect the freedmen, establishing a camp between the two within a cemetery. The grounds filled up with tents, leading locals and troops to call it Camptown.

During their stay, the federal troops offered their dining hall to freedmen to use as a space for worship. The formerly enslaved African Americans formed a Methodist and Baptist church (now St. John’s African Methodist Episcopal Church and Mt. Rose Missionary Baptist Church). By 1873, the Mt. Rose Missionary Baptist Church obtained custodianship of the grounds and established the Mt. Rose Association to continue supporting the cemetery in an official capacity.

An 1880 map set the acreage of the cemetery at 10 and included a flood plain. Freedmen and African American members of Brenham and the Mt. Rose Baptist Church established their identity with the growing cemetery through “home-going” celebrations. However, by 1903, the association discontinued; as a result, so did conservation of Camptown Cemetery. 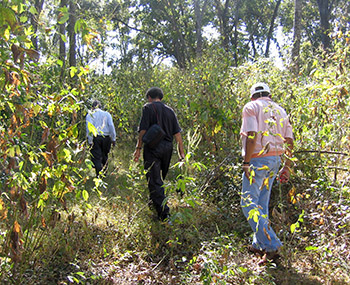 Only a continuous conservation effort can ensure the cemetery’s legacy remains in the public’s memory. Harrison and his group understand the challenges ahead and are working toward answering three pressing questions.

Who owns the cemetery?

Mt. Rose Missionary Baptist Church reestablished its claim as the overseer of the cemetery. Local tradition holds the church purchased Camptown Cemetery after federal troops left; however, a recently rediscovered deed affirmed the original Mt. Rose Association as the trustee of the property. The church revived the Association and organized it as a 501 (c)(3) nonprofit.

How large is the cemetery?

An 1880 map depicts the cemetery size as 10 acres. A surveyor, however, determined the cemetery laid across 5.4 acres, more than double the 2.5 acres recorded in the county appraisal records. Understanding the size of the cemetery is imperative for work associated with conserving any burials that may be beyond the fence line. Research continues.

Who’s buried there and how do we tell their story?

The cemetery once served as the primary burial ground for Mt. Rose Missionary Baptist Church members. However, burials declined as newer cemeteries in Brenham developed. The Texas 10 Project, named after the 10 counties with ties to historic Washington County, began as an initiative to learn more about Camptown and the people buried there. 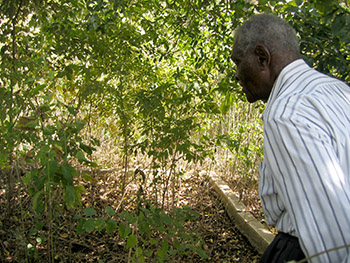 In conjunction with the Brenham Heritage Museum, researchers discovered the names of over 400 interred people through headstones, oral histories, death records, and newspaper obituaries. They also researched school, city, county, and academic records, reentering them into the collective memory through the efforts of the group.

Burials include formerly enslaved African Americans, church and community members, and Anglo residents who may have been victims of the 1867 Yellow Fever Epidemic plaguing East Texas. The overall goal is to preserve and tell the entire story of Brenham, including the town’s sizeable yet underrepresented African American population.

The Mt. Rose Church Association plans to maintain the cemetery through a “10%” offering system, similar to the donation system for the church. Harrison will assist their efforts by continuing to educate people about the importance of preserving the cemetery.

“Camptown Cemetery is the location where many outstanding citizens, leaders, and community builders were put after death,” he says. “Without their dedicated service to this area, this community would not have survived or grown to the prosperity it has achieved, especially in the areas of family development, home building, operating essential businesses, social events, sports activities, and most importantly establishing the operations of churches and schools.”

Additional information about the THC’s Cemetery Preservation Program can be found on the agency’s website. Inquiries about maintenance, conservation, or repair as well as application questions about HTC designations can be directed to the Cemetery Preservation staff at 512-463-5853 or htc@thc.texas.gov.