Dames of the Round Table 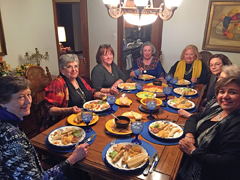 How many century-old women’s groups in Texas can you name? How about 100-year-old groups dedicated to fostering continental relations?

The Pan American Round Table is both, and this year the organization is celebrating in San Antonio, where it was founded in 1916 to promote cultural alliances among countries in North and South America.

“I’m not aware of any other groups like ours that have been around for 100 years,” says Brownsville’s Isabel Vezzetti, state director of the Pan American Round Table. “This is a very special organization, and our centennial is a wonderful way to celebrate our achievements.”

Vezzetti recently convened a group of South Texas “Round Table” members at her home in Brownsville for two of its favorite reasons: to hold an educational discussion and enjoy a delectable meal. Over several hours, they talked about Round Table’s origins, memorable trips and meetings throughout the hemisphere, and plans for the centennial celebration in October. A consistent thread connecting each discussion was Pan American Round Table founder Florence Terry Griswold.

“Mrs. Griswold was very important for women because we were not traditionally involved in decision-making policies,” Vezzetti says. “With her, there was an understanding that where women go, men will follow.”

“We’ve always emphasized community, friendship, and understanding,” Yzaguirre says. “Mrs. Griswold believed the best way to do that was through working together with other women throughout the hemisphere.”

Adds Brownsville Round Table member Sandra Maxwell, “We honor her legacy by staying true to our original motto: All for one and one for all.” 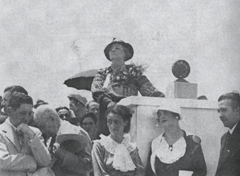 The organization’s unique bi-cultural origins are summarized in a passage from Lois Terry Marchbanks’ 1983 book The Pan American Round Table: “Texas had for centuries been a melting pot for Mexican and Anglo-Saxon settlers, and the blood of both had been shed at the Alamo. What more wonderful way to erase remaining hostility and animosity than to form an organization in San Antonio dedicated to eradicating those feelings and fostering relations between the peoples of the North and those of the South in the Western Hemisphere?”

Corpus Christi’s Peggy Lasater Clark, a past state director and past alliance director general, offers additional insight about the Round Table’s early years, noting that Griswold’s experiences growing up on the Mexican border near Eagle Pass in the late 1800s and early 1900s shaped her approach to organizing the group.

During the Mexican Revolution, Griswold helped care for refugee women and children with the hope they could continue receiving assistance. With this in mind, she gathered a group of like-minded women at the Menger Hotel on October 16, 1916, resulting in the Pan American Round Table’s founding.

“She took the concept of the roundtable from King Arthur’s knights, with the idea that everyone at the table was equal,” Clark explains. “Each seat was designed to be represented by every country in the Americas. The women were encouraged to learn and share their experiences, with the hope that maybe they could persuade their husbands to seek common solutions and avoid international conflicts.”

The idea caught on quickly—soon, other Round Tables were organized to represent different Texas regions. Laredo became the second in 1921, followed later that year by El Paso, and Austin in 1922. The first group organized outside of Texas was Mexico City in 1928, and the first in Central America was Costa Rica in 1936. By 1944, enough chapters had formed throughout the Americas to organize an international group, the Alliance of Pan American Round Tables. Currently, there are more than 200 groups in the Western Hemisphere, and 20 Round Tables in Texas.

“When my time as state director was up, I realized I’d experienced a really exciting journey and had met so many wonderful women from all across the hemisphere. The opportunity to see a country through the eyes of one of its citizens is amazing,” Clark says. “The thing that impressed me most overall was how much Florence T. Griswold is revered in countries south of the border. I’ve seen statues, parks, monuments, obelisks—you name it.”

Edinburg’s Elsie Perez, another past state director and past alliance director general, adds, “You see so much dedication to her everywhere you go.”

Perez fondly recalls her experience traveling throughout the hemisphere, attending conferences, parades, and events dedicated to encouraging communication and fellowship.

“It’s a wonderful way to bring women together and build bonds that you couldn’t have otherwise—we all learn from each other,” she says. “Another highlight is getting to experience all the different styles of food in the different countries. I tried all kinds of food I never thought I’d taste!”

According to member Ana Flores of Laredo, the organization’s primary philanthropic project is student scholarships, noting that they can be customized for each community (area of study, amount of assistance, level of schooling, books and materials, etc.). The Texas Round Table group has awarded more than $1 million to students over the past several decades.

“We’ve received letters from scholarship recipients who told us how much the assistance changed their lives,” Flores says. “It made me start crying to realize that we’d helped make such an impact.”

Laredo Table Director Diana Rodriguez agrees, adding, “The scholarships really let us know that all our hard work is paying off.” 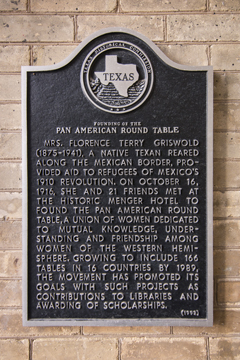 Members are currently planning the Alliance Pan American Round Table Convention, which will draw up to 800 members from the Americas. The convention is part of October’s San Antonio centennial festivities, which, to date, include a large commemorative gathering at the Menger Hotel’s THC historical marker, a parade of flags of 35 countries during the opening ceremonies, and a visit to Griswold’s gravesite at a nearby Mission Burial Park.

“We’re looking forward to having everyone in Texas for the centennial,” says Brownsville’s Norma Linda Castellano, a past local table director. “This group really is something to celebrate. When I first joined, I enjoyed meeting with women for lunch who could work and talk together, but over time, I took on more responsibility and eventually I became an officer. I never thought I would do something like that. This is truly an empowering organization.”