The Day the Guns Fell Silent

On November 11, 1918, a 30-year-old Texan in the Intelligence Section of the 360th Infantry Regiment reflected in his diary on the day’s events:

“The orders called for continuing the artillery fire with the same intensity until eleven in the morning, when the hostilities would be suspended for thirty-five days. The Germans were granted the truce so they would enter into negotiations for the conditions for peace. Those of us who heard the orders began to breathe easier, while the rest of the soldiers continued to agonize in desperation.”

What Private José de la Luz Sáenz learned that morning, and what the rest of the world would come to realize, was that the Great War was effectively over. Its official demise would come seven months later with the signing of the Treaty of Versailles. But for nations around the world, the truce that silenced the guns of war—at the 11th hour of the 11th day of the 11th month—would become the real cultural touchstone that generations would turn to when remembering their nation’s loss, sacrifice, and duty. 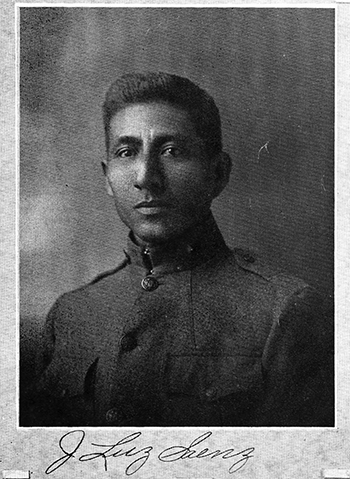 In the years that followed, every November 11 offered a connection for survivors with the memory of the 116,516 American military personnel who lost their lives. Newly created organizations such as the American Legion and the American Battle Monuments Commission further channeled the enduring need to remember.

In 1926, Congress took the formal step of declaring by Congressional Resolution that “the recurring anniversary of this date should be commemorated to perpetuate peace through good will and mutual understanding between nations.” But it would take another 12 years for Armistice Day to be officially recognized as a national holiday.

The U.S. would go on to experience the trauma of two more wars—World War II and the Korean War—before Armistice Day would undergo its final transformation. In 1954, President Dwight Eisenhower, himself a veteran of the First World War, issued the first presidential declaration acknowledging the holiday’s new name: Veterans Day.

This November 11, on the 100th anniversary of that momentous truce, countless Texans and their fellow Americans will join millions around the world in solemnly marking the occasion. Communities large and small have organized parades, the laying of wreaths, the ringing of bells, and moments of silence. Names of the dead have been collected and will be read.

And while Veterans Day is a time to show gratitude for all those in uniform, past and present, there will be an added layer of meaning this year as we pause to recall the terrible price paid 100 years ago by those who served in “the war to end war.”

“The Texans are ready!”

To honor the men and women who served in World War I, the Texas Historical Commission invites Texans everywhere to show their appreciation by joining in centennial activities. There are a variety of ways you can do your part.

• Educators are encouraged to join the 100 Years/100 Schools initiative and incorporate World War I programming into a Veterans Day event at their school.

• Consider going to an event, tending to World War I graves in your neighborhood, or participating in the national Bells of Peace initiative.

• To learn more about how Texas is honoring the war’s 100th anniversary, visit the THC’s World War I resource page or the Texas World War I Centennial Commemoration Association’s website.

You can also widen your impact by using social media to tell the world your family’s and community’s World War I stories. Perhaps it’s an ancestor’s sacrifice, or how your town responded to the war effort. Maybe it’s a treasured photograph, or the local war monument. Whatever the connection, tag your photographs and posts with #TexasWWI and share what the World War I Centennial means to you.