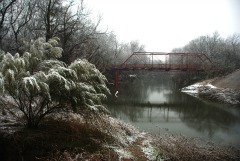 The Denton County Historic Iron/Steel Bridge Project was designed to provide a comprehensive collection of information about the county’s historic iron bridges. Of the 17 historic iron bridges in the county, 15 were replaced with new bridges and relocated to other parts of the county or region, and 2 have been left in place and converted to use as pedestrian, equestrian or bike trails in park settings. Two additional bridges were discovered during the survey effort. Phase I of the project we developed an updated report for all historic iron bridges in Denton County remaining at original sites or relocated to new sites; and provided Denton County Historical Commission (DCHC) marker information to custodians of each eligible bridge. In Phase II, the focus shifts to heritage tourism. The bridge project’s final goals will be to develop a brochure that will announce the trail of historic iron/steel bridges in Denton County with two maps, one that will track the original locations over Denton’s creeks and one that now directs the public to the new setting for the bridges.

Using a list of bridge relocations and ownership provided by Denton County Road and Bridges staff, we developed a list of contacts in which each new owner received a letter informing them of the project, a survey form for them to complete, and a DCHC Marker brochure and application. The purpose of the letter and survey was to gather information about the new site, photos of the bridge at the site, any history in the area, and to ask if the owner would sponsor a DCHC marker. If needed, DCHC marker committee would provide assistance with the research and historical narrative. The 2 bridges that have not been moved may be eligible for an Official Texas Historical Markers, one of which – the Old Alton Bridge – has already received a Recorded Texas Historic Landmark (RTHL) designation and is listed in the National Register of Historic Places. DCHC markers have already been purchased for three of the relocated bridges. All bridge owners will be invited to an informational meeting in 2013, giving them an opportunity to learn more about all of the bridges of Denton County, how a historical marker can be used to educate the public about the county’s early transportation history, and to provide an opportunity to connect with other cities and towns who now own historic bridges.

What community needs/issues did your project or program address? 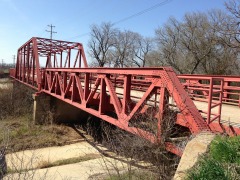 We knew the historic iron/steel bridges had been saved but did not know where they were relocated and very little about their history, save for the creeks they crossed and road names. The county commissioners court and county staff were involved in this process and were already saving the physical bridges, but saving the history became important. As we saw that many of the historic Denton County bridges were being moved and placed in new locations, we became concerned that the DCHC did not actually have a list of these bridges, their new address and that within DCHC files, we did not have any documented history in the form of a written historical narrative on each specific bridge. We knew little about the people that lived on the roads and how the bridges served the communities. Also, we needed to learn more about the bridge structures. Plus all of this research should be readily available to the public. We also wanted to know about the bridges in their new settings.

The marker committee recognized that there were some things we could do for our bridges. We could keep track of the bridges, provide education through the marker program, focus on the concept of a Historic Bridge Trail, inform the public about the Denton County Historic Bridges and bring together the custodians of these bridges through at least one initial meeting. In 2012, the committee formalized the bridge project by setting goals. Our bridge project prior to this had been sponsoring the RTHL application for the Old Alton Bridge (2010). The marker committee has a small budget but we were able to sponsor and pay for the marker from our funds. Most recently we added a second National Register plaque on the bridge, closer to the RTHL marker, paid for by the marker committee.

Who were all the partners involved? How did they contribute to the project's success?
This project would have never occurred without the leadership of Mildred Hawks, now deceased, who was a longtime member of the Denton County Historical Commission and an advocate for the preservation of the bridges. The leadership of the Denton County Commissioners and Judge Mary Horn were instrumental. We were helped with this task by Denton County Commissioner Andy Eads and Road and Bridges Project Coordinator Robyn Davis, who provided us with a list of the adopted bridges. Rachel Yeager, project coordinator, is on the marker committee and is also Denton County GIS Manager. Her access to information has been a valuable resource for us. She was responsible for contacting and sending packets to the bridge custodians and any required follow-up.

How did you fund this project?
Funding for makers come from many sources, between the Denton County Commission, the DCMC, and cities and towns that own bridges. We are meeting with bridge owners and asking for their sponsorship of the markers. Funding the brochure will possibly come from hotel-motel funds. We will also develop a website for the bridge trial, part of the Denton County Historical Marker website, which was a project of the Marker Committee.

What challenges did you encounter? How did you overcome them?
Part of the success of this project is dependent on finding funding sources for the markers. We have found that the towns and cities who have the bridges are very appreciative and have pride in being a part of the preservation of the history of Denton County. In addition to finding funding, a problem for us is finding researchers and writers for historical narratives. We would like to develop a group of volunteers with these skills.

City governments do not move very fast. Some of the parks where bridges are to be relocated are not even developed. This will not stop us from producing print pieces highlighting the bridge trails but we will be slowed down. Our time frame will be extended beyond the year of 2013.

Based on your experience with this project, what tips or pieces of advice can you share with the preservation community?

The most important thing is to remember to be patient. You will learn a lot about your county’s history – whatever the project. All of the bridges represent so much of Denton County’s history and it is exciting for us to learn about the communities they served, the people who lived on the roads near the bridges and how the bridges are now are serving new communities with new uses. When telling this story, we believe it is important that people learn about where the bridges were originally located. That is the message that the Denton County Historical Markers and THC markers will bring to the public. With the brochure, we want to connect the iron bridges trail in the county, giving the public access to the maps – one showing the new location and one showing their original crossings over Denton’s Creeks.