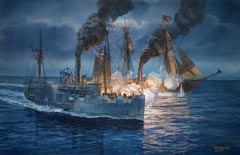 In the northern Gulf of Mexico’s shallow waters, visibility is often poor at best. But beneath the lightly lapping waves are the remains of a diverse array of historic shipwrecks, some discovered, but most unknown to archeologists, historians, and enthusiasts.

The Texas Historical Commission’s (THC) marine archeology program has long been involved with efforts to explore the gulf’s rich maritime history, spanning more than 500 years. Evidence of this history remains wrecked on the seafloor, including ships of commerce and exploration, along with vessels of war, privateers, and pirates.

Management and protection of these sites in the gulf is governed by state and federal agencies, based on their unique jurisdictions. Texas’ maritime boundary extends offshore 3 leagues (9 nautical miles, 10.34 miles) with U.S. territorial waters terminating at 12 nautical miles. Federal oversight extends an additional 200 miles in a region categorized as the U.S. Exclusive Economic Zone.

In early January 1863, the 210-foot steam warship USS Hatteras was stationed off Galveston during the Union bombardment of the city. When the Hatteras ventured into the gulf in pursuit of an unknown vessel on the evening of January 11, its captain and crew could never have anticipated the mark it would make on history or its influence on protective legislation for historic shipwrecks more than 100 years later.

Hatteras approached the unidentified steamship, only to discover it was the infamous Confederate raider CSS Alabama. Hatteras was disabled during a brief exchange of cannon fire, and sank in less than 15 minutes with the loss of two lives. This was the only naval battle during the Civil War to occur offshore in the Gulf of Mexico, and the only U.S. warship sunk at sea by Confederate forces during the war.

Dr. Paul Cloutier, a Rice University physics professor, discovered the shipwreck in 1976, and his early salvage attempt was the first major challenge to U.S. ownership of its sunken military properties. The landmark court case inexorably established the government’s claim on its historic shipwrecks.

Hatteras is approximately 20 miles off Galveston, and protection of this shipwreck is largely managed by the U.S. government through the Naval History and Heritage Command (NHHC), the Bureau of Ocean Energy Management (BOEM), and the Bureau of Safety and Environmental Enforcement (BSEE).

“We’ve worked closely with federal agencies in monitoring this significant archeological site ever since the wreck was discovered,” explains Pat Mercado-Allinger, director of the THC’s Archeology Division.

Renewed interest in Hatteras was triggered by an examination of the wreck in 2010 during a BOEM-funded study. Archeologists from Tesla Offshore, Inc. observed changes at the wreck, recognizing the site was more exposed than in the past and evidence of potential looting.

Though diving on historic wrecks in state and federal waters is not typically discouraged, damaging the
site or removing artifacts is considered unlawful according to many governmental regulations. The
National Oceanic and Atmospheric Administration’s (NOAA) Office of National Marine Sanctuaries learned
of Hatteras’ plight, and spearheaded a new investigation to assess the wreck’s condition.

In zero-to-low visibility dive projects, sonar is considered the most effective method to visualize a wreck site. The remote-sensing survey revealed Hatteras appeared to be in much the same condition as observed by Tesla Offshore in 2010. As part of the July 2012 work, data was also collected on the City of Waco wreck, located about 3 miles off Galveston.

City of Waco was a 242-foot iron-hulled Mallory Line passenger and freight steamer that sank while anchored during a storm in November 1875. The vessel caught fire, killing all 56 passengers and crew. This event is the largest maritime disaster in Texas history. Sonar and multi-beam data demonstrated City of Waco, like Hatteras, had become more exposed on the seabed in recent years.

The second stage of Hatteras investigations occurred in September 2012, including BlueView and sector-scanning sonar data collection and limited diver investigations.

Unlike traditional sonar used in shipwreck surveys, BlueView collects highly detailed information about a ship’s surfaces in three dimensions. According to Dr. James Delgado, director of NOAA’s Maritime Heritage Program, Hatteras presented a unique opportunity to test the efficacy of this technology on a shipwreck that was only slightly projecting from the seafloor (as opposed to a more-intact wreck). Work was preceded by a memorial service for those lost in battle.

During two days of diving on the site, the visibility was a murky 5–7 feet. Divers from FGBNMS and marine
archeologists from BSEE and BOEM descended almost 60 feet from Manta to position the BlueView. Additional divers, including those from THC and Tesla Offshore, worked from two chartered vessels to prepare the site and assess the wreck. Non-diver observers on Manta included students from Texas A&M University at Galveston’s Sea Camp, local historians, and NHHC staff.

The BlueView data was unveiled in January 2013, along with a new original painting by Tom Freeman, at the 150th anniversary of the Battle of Galveston hosted by the Galveston Historical Foundation. At the Galveston event, Delgado and author Dr. Norman Delaney presented talks on the history of Hatteras and the recent archeological investigation.

Representatives from THC, BOEM, BSEE, and the Galveston County Museum worked alongside NOAA in presenting exhibits on maritime archeology and Galveston’s Civil War history at the Texas Seaport Museum in conjunction with other exhibits highlighting NOAA’s work on Hatteras and the FGBNMS. Hatteras, through this recent collaboration, continues to make its mark on history with the first use of BlueView technology in an offshore environment.

“It’s exciting for our agency to be a part of this pioneering investigation,” Mercado-Allinger says. “We’re looking forward to continuing these important partnerships in our future work.”