To the Devil with Your Glorious History: The Life of Peggy McCormick

Before it was the site where Texas won its independence, the San Jacinto Battleground was a cattle ranch owned by Peggy McCormick. 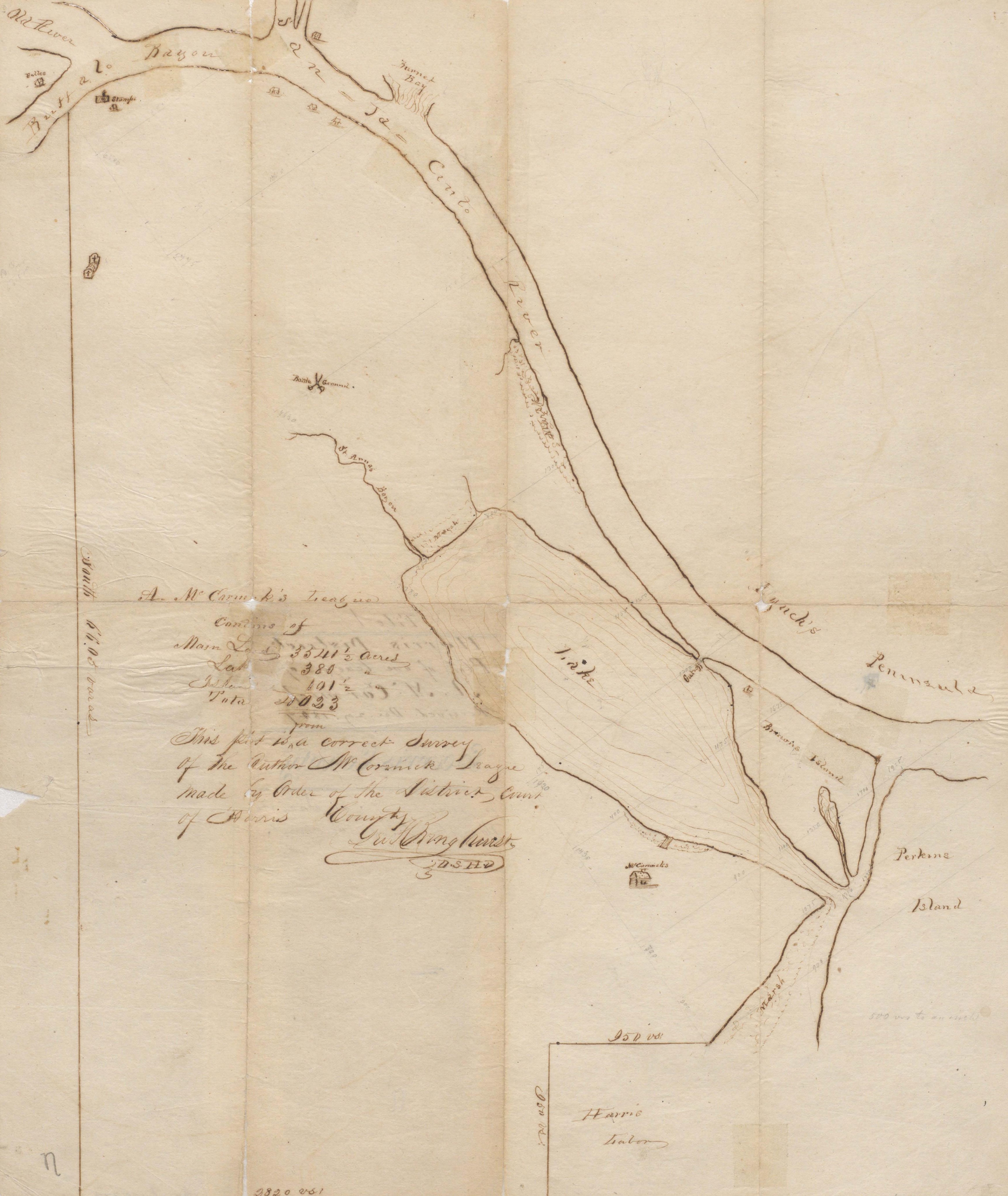 Peggy was born in Ireland, likely around 1788. Along with her husband, Arthur, and two sons, John and Michael, Peggy immigrated first to New Orleans in 1818 and then to Texas in 1823 or 1824, making the McCormicks part of Austin’s Old Three Hundred. The family settled on the southern bank of Buffalo Bayou, and were officially granted the deed for a league of land on August 10, 1824, by Stephen F. Austin. (A league, or sitio, was 4,428 acres granted to settlers planning on raising cattle. Immigrants planning on farming received 175 acres known as a labor.)

Arthur McCormick had his land surveyed in December 1824 or January 1825 by his neighbor, Dr. Johnson Hunter. In the days before precise maps, local landmarks were used to mark the boundaries of a property; the McCormicks’ league was measured from a four-inch persimmon tree near the San Jacinto River. Because they were planning on using their land for grazing, Arthur requested that Hunter avoid the marshy ground bordering the rivers to the north and east, and focus instead on the open prairie.

In February 1825, Arthur traveled to San Felipe de Austin to discuss a plan to establish a colony of Irish immigrants in Texas. Austin granted him the credentials for the project, but Arthur drowned while trying to cross Buffalo Bayou on the return trip and the project fell apart. His property passed to his widow Peggy, who stayed on the land and continued to raise cattle to sell at the Louisiana markets.

They Haunt Me the Longest Day I Live

Like most civilians during the Texas Revolution, Peggy fled east in April 1836 before the Battle of San Jacinto, although her youngest son Michael served as a courier for the Texas government during the war. She returned home shortly after the battle, only to find that her corn and cattle had been taken by both the Texas and Mexican armies, and her property was covered with the unburied bodies of hundreds of Mexican soldiers.

By all accounts, it was a grisly sight. William Zuber, a private in the Texas Army, recalled the battlefield with horror:

After breakfast on the morning of the twenty-third [April 1836], I walked alone to the battlefield. The slain Mexicans were a ghastly sight. Exposed first to a drenching rain and then to a burning sun, they were decaying rapidly and could not be moved without breaking into pieces. They sent forth a sickening stench.

Horrified, Peggy rode to the Texian camp and demanded General Houston bury the bodies, telling him that the sight would haunt her for the rest of her life, but he refused. The Texas Army claimed to not have enough willing men to both guard the prisoners and bury such a large number of dead. Houston suggested that General Santa Anna order his men to do the task, but he refused and suggested the Texians burn the corpses instead.

Houston tried to calm Peggy down by telling her, “Madam, your land will be famed in history as the classic spot upon which the glorious victory of San Jacinto was gained! Here was born, in the throes of revolution, and amid the strife of contending legions, the infant of Texan independence!”

Unimpressed, Peggy responded, “To the devil with your glorious history!” 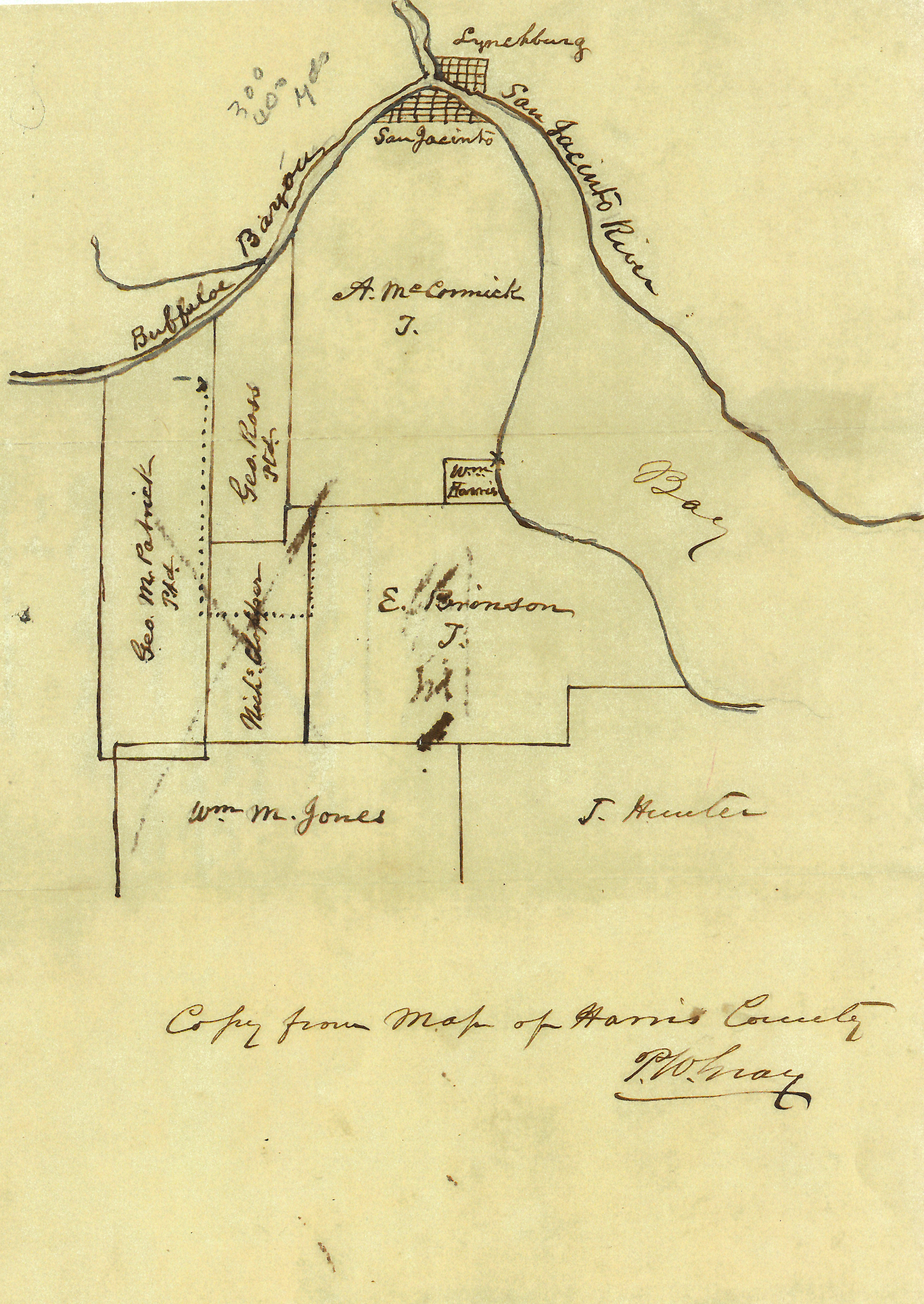 The bodies of the Mexican soldiers lay on Peggy’s land through the summer and fall. Vultures and wolves ate the dead pack animals, but not the human remains. At least some of the bodies, however, were disturbed by human grazers. When John James Audubon, the great American naturalist, visited Texas in 1837, he acquired five skulls from the Battleground which he sent to a friend in Philadelphia to study, and there are other accounts of skulls being taken from the battlefield as souvenirs.

Peggy appealed to the Republic of Texas’ government for help burying the dead, but with no success. Eventually, the situation became intolerable for Peggy and her neighbors. According to William Zuber:

When all their flesh had disappeared, the cattle of the locality chewed their [Mexican soldiers] bones, which imparted such a sickening odor and taste to the beef and milk that neither could be used. The citizens finally buried the bones, except for some of the skulls which the cattle could not chew, to stop the ruin of the beef and milk.

Her land once again clean, Peggy returned to raising cattle, rebuilding her herd to 400 animals by 1850. With the aid of an enslaved man, she became one of the largest cattle herders in Harris County.

Peggy McCormick died on July 30, 1859, when her house burned down, possibly as part of an attempt to rob her.

After his mother’s death, Michael McCormick requested a copy of the family’s land title since the original had been destroyed in the fire. When he received it, however, he discovered to his dismay that nearly half the league had been removed from the original grant. Michael accused a neighbor, Dr. George Patrick, of defrauding his mother of her land and shifting the boundaries away from the productive prairie and toward the marsh. The new boundaries weren’t the only surprise. Michael also discovered that in 1845, the Harris County sheriff had sold a large percentage of the McCormick’s land to settle debts. 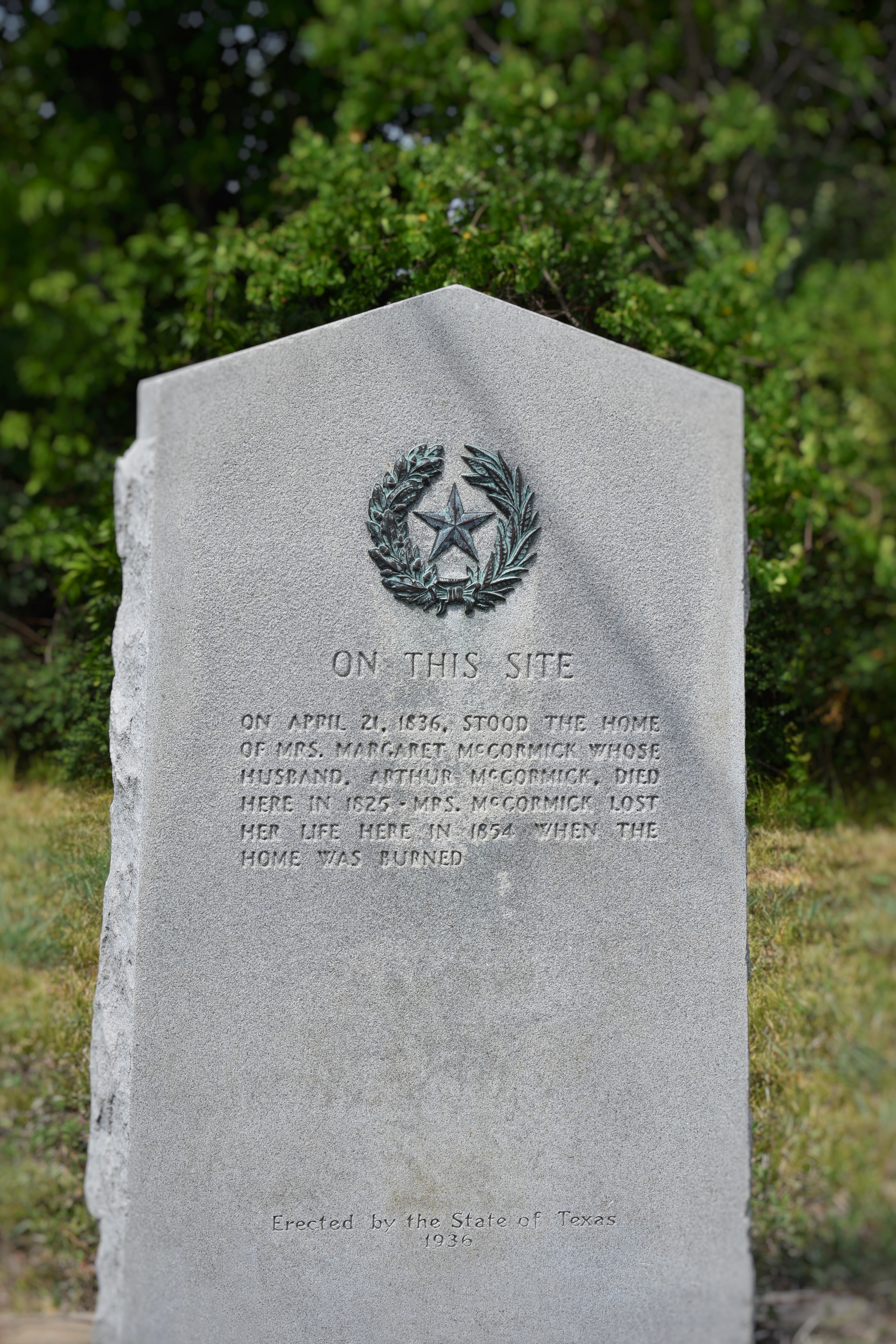 In 1861, Michael sued Patrick in the Harris County Eleventh District Court over the disputed survey. Patrick claimed to have surveyed the property as a favor to Peggy in 1830 using the description of the boundaries from her copy of the original land grant. Patrick became the Harris County surveyor in 1838 and had his deputy surveyor, Darius Gregg, resurvey the land. Gregg testified that he also followed the property boundaries from the original land grant. Austin’s register of land grants shows that the boundaries were consistent with modifications to the field notes for Peggy’s land made in 1828. This disputed territory, about 1,500 acres, was acquired by Patrick in 1838.

Michael claimed that neither he nor his mother knew anything about the resurveying and the lost land, and Peggy was illiterate, which would have made it difficult for her to verify the new surveys. Without the McCormicks’ copy of the original land grant, which was destroyed in the fire that killed Peggy, the jury sided with Patrick in 1869, and Michael lost almost all of his family’s land.

Today, nothing remains from Peggy’s time at San Jacinto. The State of Texas erected a marker in her honor in 1936, but it has been moved several times, and the exact spot of her cabin is unknown.