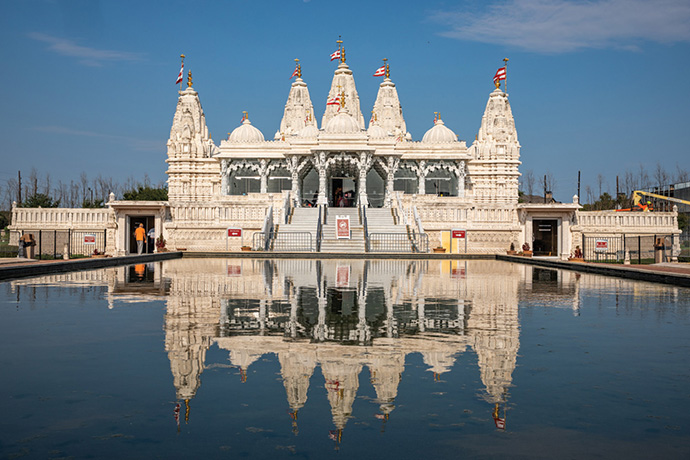 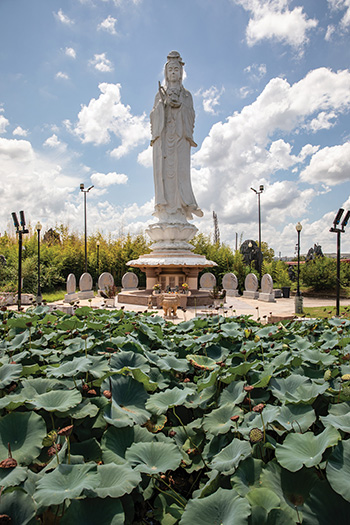 Houston’s Civil Rights movement had a different character than the rest of Texas. Much of the state wrestled with addressing inequalities for African Americans and Mexican Americans, but few Texas cities had as many Asian American residents as Houston.

The first half of the 20th century was especially challenging, with cultural impacts of the Chinese Exclusion Act, Immigration Act of 1924, and World War II’s internment camps. Still, a modest Asian American community developed just east of downtown, where some residents lived adjacent to family-owned grocery stores, restaurants, and laundry services.

By the early 1960s tensions were beginning to thaw, as evidenced by the civic ascent of the Gees, a second-generation Chinese family. Albert Gee’s restaurants on South Main—Poly-Asian and Ding How—were popular culinary destinations for Houstonians and high-profile visitors, including Gov. John Connally, Richard Nixon, and Bob Hope. Gee was named Houston Restaurateur of the Month and elected president of the Houston Restaurant Association.

“The Gee family was groundbreaking—they were extremely important to this city’s Asian American history,” says Stephanie Todd-Wong of Asia Society Texas Center, an organization dedicated to cultural enrichment. “Albert Gee was a leader in the restaurant industry and opened the doors for other Asian American businesses to establish in this city due to his success.”

According to a recent Houston Chronicle article by Anne S. Chao, manager of Rice University’s Houston Asian American Archive, Gee became known as the city’s unofficial “mayor of Chinese.” He received numerous civic awards, including recognition from the Houston Chamber of Commerce. The Gee family built on the success of their restaurants and achieved prominent business positions, including a renowned immigration lawyer and part-owner of the Houston Texans football team.

“The Gee family’s experience is just one of many examples of leaders and neighbors in Houston’s vibrant Asian American community,” Wong says. “There are still so many stories we haven’t heard that should be shared. We need to listen and uplift these voices.” 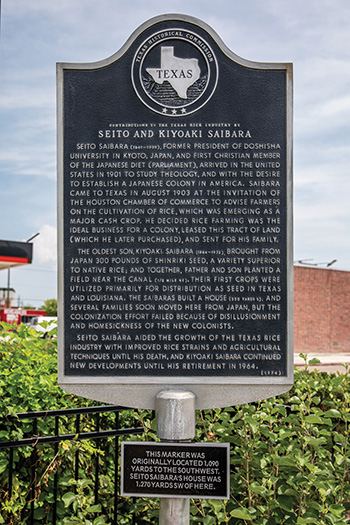 ASIAN-HOUSTON HERITAGE
The first known Texas Asian immigrant, Francisco Flores, arrived in the Mexican state of Coahuila y Tejas from the Philippines around 1822, according to Houston History magazine. A significant group of Japanese immigrants later arrived, led by Seito Saibara, who came to Texas in 1903 at the invitation of the Houston Chamber of Commerce to advise farmers about cultivating rice. His son Kiyoaki brought 300 pounds of Shinriki seed from Japan; together, they planted near a canal along present-day NASA Parkway, where a THC marker now honors the family’s contributions to the growth of the Texas rice industry.

The Immigration and Nationality Act of 1965 opened the door for many Asian newcomers in Houston, allowing the community to grow significantly in size and diversity. South Asians, Filipinos, Koreans, and Vietnamese arrived by the thousands and established temples, mosques, churches, and civic groups. Many Asian immigrants initially settled in east and southeast Houston before urban development forced their relocation to then-outlying southwestern Houston.

After the fall of Saigon in 1975, hundreds of Vietnamese residents fled their country and settled in Houston, where they found shrimping, fishing, and agriculture jobs in a humid coastal environment reminiscent of their homeland. Later, thousands of additional Vietnamese residents relocated from California and their native country to southwestern Houston.

By the 1980s, the city’s Asian population began to expand even further with a significant influx of South Asians, many of whom also established communities in the southwestern part of the city. The 2010 census lists more than 82,000 people with Indian ancestry and nearly 28,000 Pakistanis residing in the Houston area.

“Houston is a wonderful example of how Texas can be a destination for newcomers from a variety of backgrounds who can come together as a community,” says Charles Sadnick, director of the THC’s History Programs Division and a second-generation Asian Texan. “The city has embraced people from across Asia and the entire world who’ve come here to carve out a very American and Texan experience.” 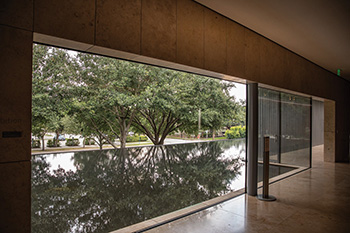 EXPLORE HOUSTON’S ASIAN HERITAGE
Houston travelers can discover the culture, religion, and food of countries from East Asia, South Asia, the Pacific Islands, and others. Although most of the businesses and homes from the city’s early immigration period are long gone, visitors can experience impressive temples with memberships dating back nearly 50 years, public gardens with ties to the city’s early immigrants, and hundreds of restaurants featuring traditional Asian dishes from family recipes.

DOWNTOWN
On the edge of the sprawling Museum District is the architecturally stunning Asia Society Texas Center, a cultural organization with 13 international outposts that traces its founding to John D. Rockefeller III in 1956. The Houston group opened in 1979 with the help of former First Lady Barbara Bush; by 2012, the center unveiled its new public building, designed by esteemed Japanese architect Yoshio Taniguchi, known for his work on the Museum of Modern Art in New York. The Asia Society Texas Center was his first free-standing building in the U.S.

The center features clean architectural lines and impressive details, including its signature second-floor water terrace—an edgeless suspended pool punctuated by occasional fountain bursts and breezes. The building also includes a large lobby that showcases art exhibits, a contemporary theater for local productions, and galleries for area artists to create and exhibit their work.

Jennifer Kapral, Asia Society’s director of education and outreach, has been addressing the challenges of public interaction during the pandemic via web-based projects. She says programming like Asia Fest, the Asian American Stories series, At Home Adventures, Family Day, and food videos have been extremely popular and beneficial.

“We developed these online programs and videos to highlight contributions of marginalized groups that are sometimes in the news for the wrong reasons,” Kapral says. “How do you respond to misleading stories about Asian Americans? Through education.”

She adds that the center’s food programming provides an opportunity to discover distinctive regional styles of cuisine, learn about the cultural roots of recipes for home cooking, and support independent restaurants and businesses.

“We’re trying to uplift the voices that aren’t always heard, and engage with them in person and online,” Kapral says. “We’re all neighbors. What we have in common—like being parents, teachers, and small business owners—should be shared and celebrated. It’s the little everyday encounters that make the biggest difference.” 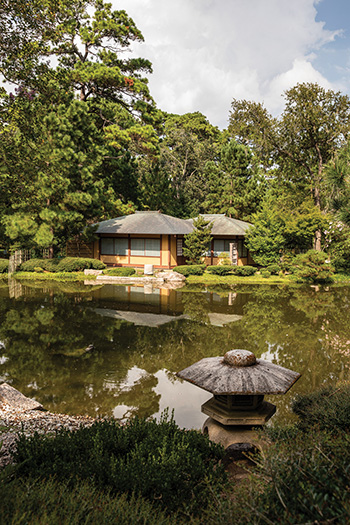 A half-mile walk away, contentment awaits at the Japanese Garden in Hermann Park. Designed by renowned Japanese landscape architect Ken Nakajima in the 17th-century Daimyo style, the garden symbolizes the friendship between Japan and the U.S. Colorful Japanese maple and cherry trees intertwine with live oaks and pines above a stone path meandering to a small pond. A shoreline teahouse was built in Japan with traditional materials and donated by the Commemorative Association.

At the nearby McGovern Centennial Gardens, visitors can see a remarkably designed pagoda (be sure to notice the colorful ceiling) provided by Taiwan as part of the Sister Cities Association. Across the path lies a statue of Chinese philosopher Confucius sculpted by the late Willie Wang.

ASIATOWN AND VICINITY
The heart of Houston’s Asian American community has shifted several times due to development pressure, from just east of downtown in roughly the 1930s–50s, to southeastern Houston in the 1960s–70s, to its current location in the southwestern suburbs in the early 1980s. Known as Chinatown until recently, Asiatown now stretches over six square miles.

Several of the area’s magnificent Asian American temples are free and open to the public. Although these are active places of worship, visitors are graciously welcomed by members who gladly provide educational tidbits about the sites' history and cultural traditions.

One of the most remarkable is BAPS Shri Swaminarayan Mandir (visitor hours Mon.-Sat. 8-10 a.m., 4-6 p.m.). This breathtaking structure transports visitors far away from suburban Houston to the heart of India. The mandir—a Hindu place of worship—is a true sacred space, comprised of intricate Turkish limestone and Italian marble. Members trace their group’s origins to the early 1970s; they helped construct the building 17 years ago from more than 33,000 individually hand-carved pieces sent from India.

Guests are required to remove their shoes (placed in a small room at the entrance) and wear “clean, conservative clothing” (no shorts, skirts, or sleeveless shirts) before ascending the massive temple steps. Inside, Hindu deities are represented by colorful artwork at individual stations. The sense of harmony and welcomeness is complemented by the surrounding exquisite architectural detail inside this monument to peace.

Several miles north is Vietnam Buddhist Center, featuring a traditional prayer hall and lush gardens. Its focal point is an enormous 72-foot-tall statue of Quan Am, a revered bodhisattva (one who seeks awakening) known in Vietnam as the Goddess of Compassion. It is among the tallest sculptures in the country.

The statue is surrounded by a gorgeous garden with welcoming pathways and gigantic fan-shaped water lotus leaves among colorful flowers. The prayer hall evokes a Vietnamese village with its pagoda-style roof and intricate wood detailing. 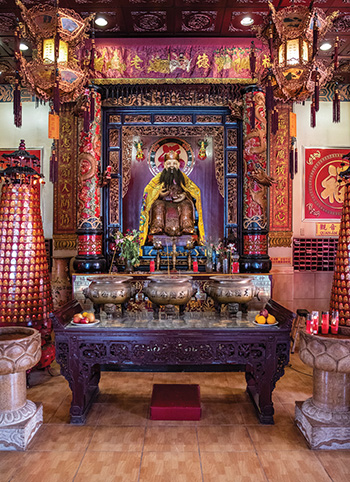 Five miles northeast is the colorful and welcoming Teo Chew Temple. Yet another secluded temple surrounded by suburban development, Teo Chew transports visitors to Vietnam via statues and traditional architecture. Inside, guests are greeted by fragrant incense rising to an ornamental red ceiling with suspended lanterns. Stations with deities are accompanied by tables filled with temple members’ offerings of fresh fruit and flickering candles.