From Disputed Borders to Manifest Destiny 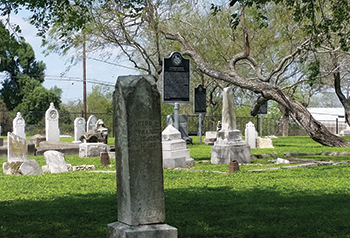 The steamship Dayton began life in 1835 in Pittsburgh, Pennsylvania. Robert Beer oversaw its construction, and often captained the 111-ton sidewheeler steamship on the Ohio and Mississippi rivers. At the time, he couldn’t imagine that the Dayton would be moving goods and people along the Texas coast and between Galveston and Houston only four years later.

The Dayton—along with many forgotten skirmishes and determined volunteers—would go on to play an underappreciated role in the U.S.-Mexico War of 1846–48. Several of these subjects are now commemorated via county and community names across Texas and on official Texas Historical Commission markers.

In the decade following independence, relations between the Republic of Texas and Mexico were strained, with a series of occupations, expeditions, attacks, and counterattacks. In March 1845, outgoing President John Tyler signed a joint congressional resolution for annexing Texas to the United States. After the terms of annexation were accepted by a convention of the Republic on July 4, new president James K. Polk ordered General Zachary Taylor to lead federal troops from Fort Jesup, Louisiana to the Nueces River in Texas. 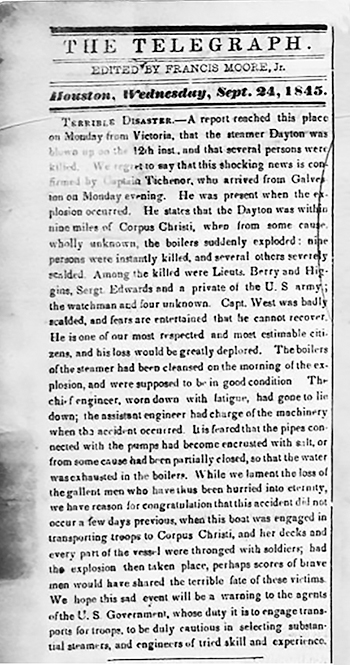 The men came by sea, leaving New Orleans and landing on July 26, 1845 at St. Joseph Island (also known as San José Island near present-day Port Aransas). Lt. Daniel T. Chandler of the 3rd U.S. Infantry Regiment waded ashore from the USS Alabama and planted a flagpole atop a sand hill. This was the first time the Stars and Stripes flew over the Lone Star State. Shortly after, the army contracted the Dayton to transport men and materials from the island to the army encampment at Corpus Christi.

Following numerous trips over the intervening weeks, a series of tragic explosions occurred on September 12 aboard the Dayton. The ship had left the mainland after delivering supplies and was returning to the island with a party of noncommissioned officers and enlisted men.

One of the boilers exploded, killing two officers, when the ship was off McGloin’s Bluff. Then the second boiler exploded, killing more officers and crew. The victims were buried in the first federal military cemetery in Texas, now known as Old Bayview Cemetery in Corpus Christi.

These men—seven killed that day, and three who died later—became the first casualties in the conflict between the United States and Mexico, officially declared as war the following May. In his journal, Col. Ethan Allen Hitchcock wrote, “14th Sept. A military funeral took place to-day at the burial-ground which I selected. It is on the brow of the hill northwest of camp, and commands a view of the Nueces and Corpus Christi Bay. It is a beautiful spot.” The State of Texas placed a historical marker at Old Bayview Cemetery in 1967.

An often untold yet historically significant part of the story is the fact that one man made a last-minute decision to not step aboard the Dayton. Lt. Ulysses S. Grant, future Commanding General of the Army and President of the United States, avoided the tragedy of that fateful day. 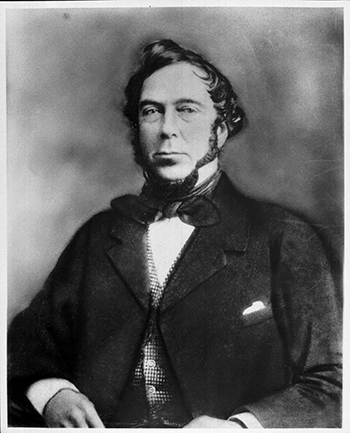 Many additional stories from the U.S.-Mexico war are little-remembered today. For example, one of the most important figures of the time was George Wilkins Kendall, who was born in New Hampshire and worked his way across the country as a printer by way of Vermont, Washington D.C., New York City (with famed newspaperman Horace Greeley), and Alabama. With Francis Lumsden, he founded the New Orleans Picayune, still the city’s leading newspaper.

Kendall advocated for the annexation of Texas and came here in 1841 to join the ill-fated Santa Fe Expedition, which sought to increase trade with Texas and stake a claim on the Santa Fe territory. More than 300 men were captured east of Santa Fe, arrested, and marched to Mexico City, then Perote Prison near Veracruz for several months. The Picayune published more than 20 of Kendall’s letters, and his subsequent book Narrative of the Texan Santa Fe Expedition became a best-seller. Kendall’s Picayune favored war with Mexico to expand American territory; when war broke out, he went where the action was, becoming the nation’s first foreign war correspondent.

In the 1850s, Kendall moved to Texas and became a leading stockman in the state’s nascent sheep industry. He promoted sheep raising and the Hill Country, where he established his largest ranch near Boerne. When a new county was carved out of Kerr County in 1862, it was named Kendall County in his honor. The State of Texas has placed historical markers and plaques for Kendall at his ranches in Comal and Kendall counties (both placed for the 1936 Texas Centennial), at his grave in Boerne, and near his home in the eponymous Kendall County town of Kendalia.

The U.S.-Mexico War and its associated preludes and postscripts were among the watershed events in North American history. Skirmishes and battles along the disputed Rio Grande led to a formal declaration of war, and American troops were led across Mexico by many of the officers who would become the commanding generals of the Civil War some 15 years later.

The Treaty of Guadalupe Hidalgo, signed in 1848, gave the United States an additional half a million square miles of territory, fixing the boundaries of the nation at the Pacific Ocean and the Rio Grande. Through this war, the United States asserted itself as a stronger global power and Texas was firmly established in the national consciousness as a land of contrasts—a melting pot within a melting pot.

War with Mexico left an indelible impression on Texas, not only from the training and battles here, but also on the map of the Lone Star State after it joined the United States. At least 32 camps and forts were named for soldiers and others involved in the war. Most of these sites were established in the decade following the end of the war with the westward movement of the Texas frontier.

** Indicates soldiers killed in action in the U.S.-Mexico War