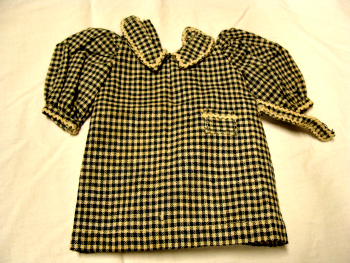 Frank and Clara Starr raised six girls in Maplecroft. It’s no wonder, then, that the Starr Family Home State Historic Site has a large collection of hand-made doll clothing. Most of it is in a Victorian style dating to the late 19th and early 20th centuries, depicting the distinctive Victorian puffy-sleeved shirts and skirts gathered at the waist. Many pieces of the collection were made with fabrics matching objects in the museum’s historic clothing collection. It seems the Starr women did what most sewers did—they kept scraps for other uses.

While most of the doll clothing was made of functional cotton, some small pieces were fashioned from silk and wool scraps, probably from the scraps of the adult Starr women’s gowns. Black silk scraps used to make a lace trimmed bonnet appear to have originated from their Grandmother Clapp’s black formal silk gown. Additionally, the doll clothing collection contains a fine selection of hats and bonnets along with other accessories. 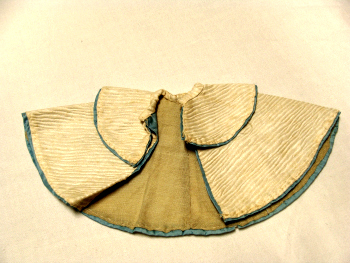 Most of the doll clothing appears to have been created by Clara Starr, as several of the miniature undergarments are clearly labeled with her initials, “CS.” Other pieces in the collection indicate her daughters were learning to sew. The uneven, messy stitching of these experimental pieces may have been some of the girls’ first attempts at sewing.

It isn’t hard to match some of the doll clothes to the adult clothing in the museum’s collection, but a mystery remains. The collection contains many pieces of doll clothing and accessories, including six Victorian-era dolls. Oddly, all six dolls are too big for the clothing. It looks like there is more research to be done!

Wow I would so love to come see these! When I was a child (oldest of 5) my nana made alot of my dresses. Then my mom made some things for me & my sister after she was born. She taught me how to do some things like pin the patterns. I just could really appreciate this exhibit!!