From Doris to Dwight

Texans have always contributed a surplus of soldiers and resources to the nation’s military. But several of the state’s participants in World War II went above and beyond the call of duty. 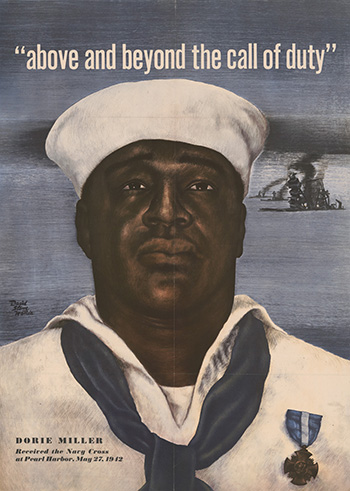 DORIS MILLER
Doris "Dorie" Miller, considered the first African American hero of World War II, was born in Willow Grove, Texas, in 1919. Miller was named by the midwife who assisted with his birth; she was certain before the birth that the baby would be a girl.

Miller played football and supplemented the family income by working as a cook in a small Waco restaurant during the Great Depression. Less than a month before his 20th birthday, he enlisted in the U.S. Navy at its Dallas recruiting station. Following bootcamp training, he was assigned to the USS West Virginia as a messman.

On December 7, 1941, Miller was collecting soiled laundry just before 8 a.m. when the first bombs blasted his ship at anchor in Pearl Harbor. Miller rushed to the main deck, where he assisted moving the mortally wounded captain. He then raced to an unattended deck gun and fired at the attacking planes until forced to abandon ship. It was Miller’s first experience firing this kind of weapon because most Black sailors did not receive gunnery training.

Officials awarded the Navy Cross to Miller during a ceremony at Pearl Harbor in May 1942. Miller later reported to duty aboard the aircraft carrier Liscome Bay as a mess attendant, first class. During the battle of the Gilbert Islands in November 1943, his ship was torpedoed and sunk in the Pacific Ocean, and Miller perished.

In addition to conferring upon him the Navy Cross, the Navy honored Miller by naming a dining hall, a barracks,
and a destroyer escort for him. The U.S. Navy named an aircraft carrier, the USS Doris Miller, in his honor on January 20, 2020. 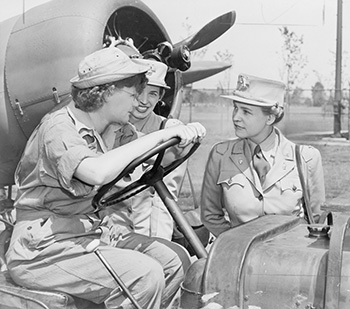 OVETA CULP HOBBY
Oveta Culp Hobby worked to better her community and her country throughout her lifetime. She is best known for serving as the director of the Women’s Army Corps and as the first secretary of the Department of Health, Education, and Welfare.

Hobby was born in 1905 in Killeen, Texas. In the 1930s, she worked at Houston’s newspaper The Post, owned by her husband, former Governor of Texas William P. Hobby.

World War II brought changes to Hobby’s life. From 1941 to 1942, she served as the head of the Women’s Interest Section in the War Department Bureau of Public Relations.

In 1942, Congress passed a bill that created the Women’s Auxiliary Army Corps (WAAC), and Hobby became its first director. She obtained the rank of colonel; when the WAAC became integrated into the Army, she remained director throughout the war.

Hobby was awarded the Distinguished Service Medal in January 1945 for her dedication and effective supervision. She was the first woman in the Army to receive this award, the military’s highest non-combat award at the time.

Hobby was inducted into the Texas Women’s Hall of Fame in 1984, and the U.S. Post Office later honored her achievements with a commemorative stamp. Hobby died on August 16, 1995. 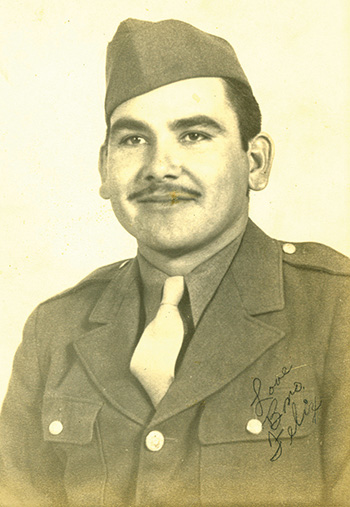 FELIX LONGORIA
Felix Z. Longoria, born in Three Rivers, Texas in 1920, was a Mexican American soldier who served in the U.S. Army as a private. He died during World War II and was buried at Arlington National Cemetery.

Longoria was working in Corpus Christi as a truck driver in 1944; in November, he enlisted in the Army after feeling the call to service. In late April 1945, he shipped out from California to the 25th Infantry Division, then located in the Philippines. In June 1945, his platoon was ambushed and Longoria was among those killed.

In 1948, Longoria’s remains were recovered from the Philippines. His body was shipped home for burial in the Three Rivers cemetery, where the Mexican section was separated. The director of the funeral home would not allow the funeral home’s chapel to be used.

Longoria’s widow and her sister discussed this refusal with Dr. Hector Garcia, founder of the American G.I. Forum. Then-Senator Lyndon B. Johnson responded to Garcia immediately with support and an offer to arrange for a burial at Arlington National Cemetery.

The funeral took place in February 1949. Sen. Johnson and a representative of the U.S. president were with the Longoria family. Now known as the Felix Longoria Affair, the events later provided Mexican Americans an example to unify and expand their struggle for civil rights. 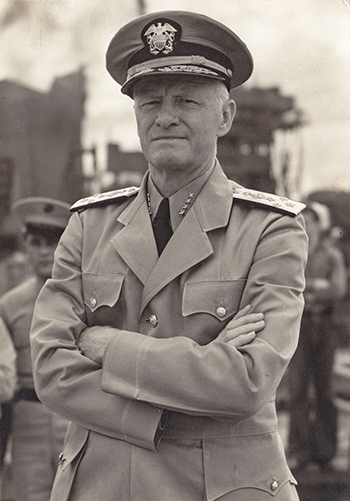 CHESTER NIMITZ
Chester William Nimitz, who guided Allied forces to victory in the Pacific in World War II, was born in Fredericksburg, Texas, on February 24, 1885. During his early years, his grandfather Charles H. Nimitz, a German immigrant, former seaman, and owner of the Nimitz Hotel, served as his father figure.

Nimitz graduated from the U.S. Naval Academy in 1905. In four consecutive submarine commands for the Navy, he became a leading “pigboat” authority and built a reservoir of experience that proved invaluable in both world wars.

Nimitz went to Pearl Harbor to build a submarine base and command the Submarine Division. In 1939, he became chief of the Bureau of Navigation, a position he still held when the Japanese attacked Pearl Harbor on December 7, 1941. In the aftermath of the attack, Nimitz was named commander-in-chief of the Pacific Fleet.

Fleet Admiral Nimitz was later named commander in chief of Pacific Ocean Areas, in addition to his Pacific Fleet command. With authority over most of the Pacific theater, Nimitz coordinated the offensive that brought the Japanese to unconditional surrender.

He signed the peace treaty for the U.S. aboard the battleship Missouri in Tokyo Bay on September 2, 1945. He was decorated by foreign governments and was awarded both the Army and Navy Distinguished Service medals.

In 1964, a local citizens’ group established a museum in the old Nimitz Hotel, which evolved into the National Museum of the Pacific War. Nimitz served the United Nations as roving ambassador and was a regent of the University of California.

In January 1966, he suffered a stroke. Nimitz died on February 20, 1966, and was buried in California’s Golden Gate National Cemetery. 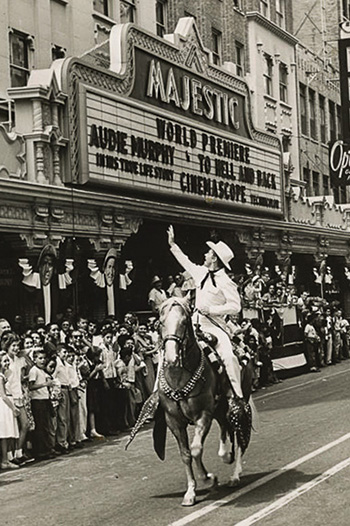 AUDIE MURPHY
Audie Leon Murphy, war hero, Hollywood actor, and songwriter, was born near Kingston, Texas, in 1924. At the time of his death, Murphy was the most-decorated combat soldier of World War II.

He enlisted in the U.S. Army at Greenville, Texas, in June 1942, near his 18th birthday. During his World War II service, Murphy received 33 awards, citations, and decorations and won a battlefield promotion to second lieutenant. He received every medal that the U.S. gives for valor—two of them twice.

In January 1945, near Holtzwihr, France, Murphy was credited with killing or wounding nearly 50 Germans and stopping an attack by enemy tanks. He received the Medal of Honor for this act of bravery.

He subsequently pursued several careers: as a successful movie actor, a lyric writer for country and western songs, an author, and a poet. Murphy appeared in 45 movies and starred in 39 of them. His best-known films were “The Red Badge of Courage” (1951), “To Hell and Back” (1955), and “The Unforgiven” (1960). 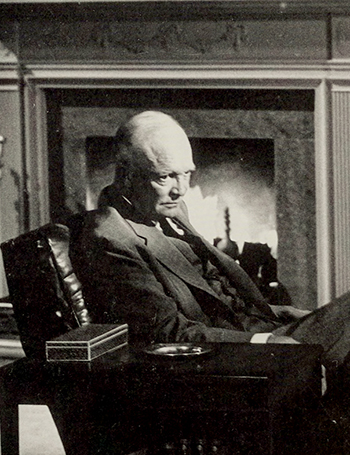 Dwight David Eisenhower, general of the Army and 34th president of the U.S., was born in Denison, Texas, in October 1890. His father was locally employed with the Missouri, Kansas and Texas Railroad, and their modest home is now operated as the THC’s Eisenhower Birthplace State Historic Site.

Eisenhower was appointed to the U.S. Military Academy, West Point, in July 1911. He graduated in 1915, and was soon assigned to the 19th Infantry at Fort Sam Houston in San Antonio.

Eisenhower’s military career began during World War I, where he commanded a heavy tank brigade at Gettysburg, Pennsylvania, and was awarded the Distinguished Service Medal. On December 14, 1941, Eisenhower was transferred to the War Plans Division under Gen. George C. Marshall.

As supreme commander, Allied Expeditionary Force, he gave the order that sent British and American troops into Normandy on June 6, 1944 (D-Day). Eleven months later (V-E Day), he accepted the surrender of Nazi representatives.

In 1948, Eisenhower retired as Army chief of staff to become president of Columbia University in New York. In 1951, he was recalled to military duty to serve as supreme commander, Allied Powers in Europe, under NATO. Eisenhower’s presidential nomination in 1952 was achieved thanks to a Republican delegation from Texas. His domestic achievements included the construction of the Interstate Highway System and passage of the first civil-rights law since the Civil War. Eisenhower left office in 1961. He died on March 28, 1969, at age 78.

Bios adapted from The Handbook of Texas.

Visit the THC’s historic sites online to learn more about Nimitz and Eisenhower.