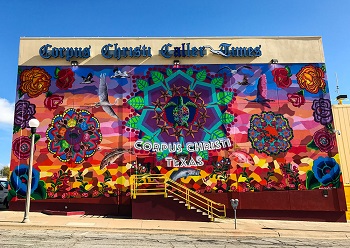 When visiting a new city, there is always a unique culture waiting to be explored. Corpus Christi has a rich history that has only recently started to be showcased on the walls of downtown buildings with a collection of coastal and Chicano influenced murals.

These colorful and captivating murals were created by passionate local artists, in a movement led by creatives who are determined to embrace the talent that develops in our region. Here are five murals to visit when you come to downtown Corpus Christi.

It is located at the end of Starr Street, on the historic staircase that connects Lower and Upper Broadway. The mural depicts skeletons doing everyday activities, which is popular with Dia de los Muertos art. 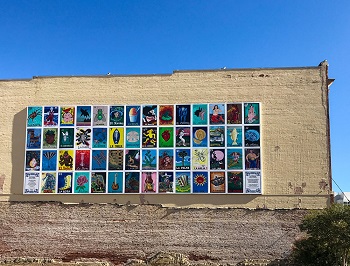 Another important mural is “Loteria!” which hangs on the backside of K Space Contemporary’s building, facing Chaparral Street, just south of Starr Street. In 2015, K Space had put on its biggest show ever with 114 different artists submitting 130 different Loteria cards for an exhibit. The idea then evolved into having jurors pick out 56 of the best cards and having them displayed in the mural.

A local favorite is the “Endless Sunset: The Colors of Our City,” by Sandra Gonzalez, which is displayed on the side of the Caller-Times building facing Taylor Street. Our local newspaper held a contest in 2015 and selected Sandra Gonzalez’s from 19 entries. When taking a closer look, you can catch all the coastal icons and cultural elements that capture the spirit of Corpus Christi.

Another great spot to check out in Downtown Corpus Christi is the Art Center, known for displaying only local art, it also has an eye-catching mural on the west side of the building facing Shoreline Boulevard. The mural is called “Chicano Pop” and was created in 2017 by local artist Mayra Zamora. This piece displays her artistic style and if you look close enough you might be able to decipher the hidden message she put in the mural.

The last mural you should make time for when visiting Downtown Corpus Christi is the “A Breath of Fresh Air,” on the wall of the Braswell Office Systems building on William and Mesquite Streets. This mural is an ode to sea turtles and sea life in the Coastal Bend. It was done by local muralist Jeremy Flores who now has opened an art supply store called Cre8ive Culture on William Street. Jeremy also just created a classic “Welcome to Corpus Christi” Mural on Mesquite Street. 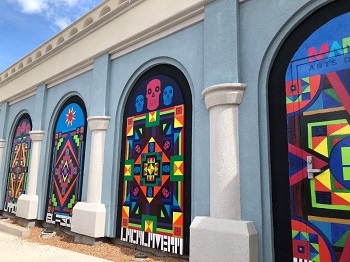 There you have it, a taste of our city by just looking at murals. Corpus Christi has so much to offer from our beaches and captivating wildlife to the vibrant culture and heritage. We hope you find your trip to downtown Corpus Christi a festive and colorful memory you never forget.