This article was originally featured in the October 1989 issue of the Medallion. 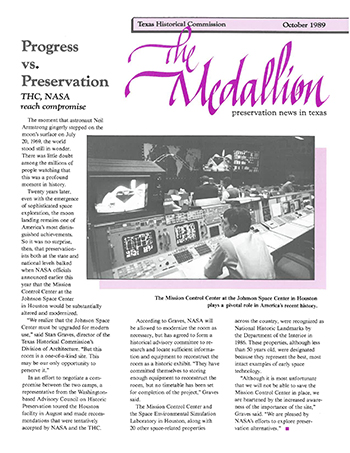 One of the oldest air fields in Texas began in 1917 when a U.S Army Signal Corps pilot, flying in his “Jenny” (Curtiss JN-4D) biplane in search of a suitable landing site, circled a former orchard in Mineola and touched down in the meadow.

The unprecedented landing sparked the imaginations of residents in this small Northeast Texas community. Among those who witnessed the strange sight was young Henry Wisener, who happened to be working in a nearby field when the plane emerged in the sky and landed in a clearing known as Massangale’s meadow.

Within 10 years, Wisener was to devote himself to a long and exciting career in aviation, first as a pilot for the Army Air Service during World War I, then as manager of his own aviation business. Massangale’s meadow, now known as Wisener Field, is still in use as a private airstrip.

Wisner Field received an Official Texas Historical Marker for its role in the development of Texas aviation. For many years, it was the only air field between Dallas and the Louisiana border. Used frequently by military and civilian aircraft after World War I, it served both as a rest stop for weary pilots and as an emergency landing area.

Texas, with its low, flat terrain, was a favored region for training military pilots. After World War I, however, the federal government sold hundreds of surplus planes and their parts cheaply. This made it possible for flying fanatics, many of them former military pilots, to keep their noses in the air.

These enthusiasts capitalized on the novelty of airplanes to earn their living. Flying over small towns across the Southwest, they would attract spectators who paid admission to watch stunt shows and to ride in the flying machine.

These traveling daredevils were called “barnstormers” because often they would spend the night in a barn before flying off to the next suitable landing field where they were likely to attract a crowd of spectators. When several pilots got together to perform, they were called a flying circus. One such circus, called the Royal Flying Circus, was operated by the Wisener brothers. Acts included such performances as plane changes, wing walking, changes from car to airplane, parachute jumps, and stunt flying.

“We learned that in addition to parachute jumps by our regular jumpers, we could always attract a much larger crowd by allowing a local person to make a jump, too,” said Henry Wisener in a recent interview.

Apart from the daredevil antics of barnstormers, the fledgling aviation industry benefitted from what these early pilots learned. It was their enthusiasm that kept aviation alive and gradually led to commercial uses of airplanes. For example, Mineola pilots offered charter services for passengers and freight. When floods closed Mineola’s railroad bridge, an airplane was chartered to carry passengers over water to the next station to catch the train.

When the Wiseners leased Massangale’s field for $100 in 1927, only 163 commercial or private airports existed in the nation. Then, after Lindbergh’s sensational transatlantic flight, interest in aviation took hold. By the early 1930s, Wisener Field was one of 900 commercial airports in the nation.

In 1934, the Wiseners purchased the airfield and an additional 50 acres to construct a longer runway. They built more hangars and established the Wisener School of Aeronautics. The first guidance device was installed when Bryce Wisener, Henry’s brother, bought a beacon light to guide pilots along the major aerial route from Dallas to points east, and it still is in operation.

The airport expanded in the 1940s, and a precision machine shop was added for aircraft maintenance in 1946. After World War II, the Wiseners secured a government contract under the G.I. Bill to train veterans who wanted to learn to be pilots. The program terminated in the 1950s.

Beginning in 1963, the field was leased to the city of Mineola for 23 years. Improvements made during that time include the installation of runway lights and the addition of communication facilities. In 1980, an instrument approach was approved by the Federal Aeronautics Administration, allowing the field to meet the demands for use in all weather conditions. These changes reflect the continued usefulness of the field, which was the first permanent airport in Northeast Texas.

The significance of the field and the Wisener brothers’ contributions to aviation and to the region was acknowledged publicly in 1980, when Mineola mayor Joe Smith designated May 3 of that year “Henry and Bryce Wisener Day.” The FAA’s Southwest Region director at the time, C.R. Melugin, Jr., said the Wisener brothers “enriched Mineola and the East Texas aviation industry by sharing their flying experience and airport facilities with pilots and aspiring pilots.”