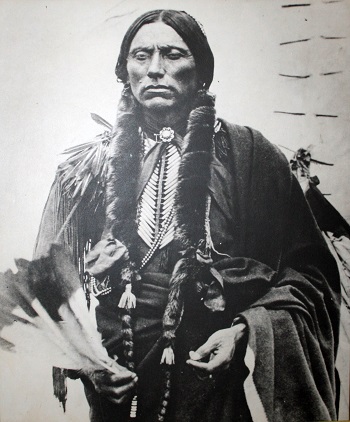 Dozens of arrows, 22 feet tall, pierce the landscape of the Panhandle Plains. They commemorate Quanah Parker, last chief of the Comanche (Nʉmʉnʉʉ), and the territory called Comanchería where his people lived. Parker was the son of a Quahada Comanche man and a white woman, a heritage that made a lasting impact on his life.

His mother was Cynthia Ann Parker, who was famously captured at age 9 by a group of Comanche during an 1836 raid at her family’s homestead near present-day Mexia. She grew up with the tribe, married chief Peta Nocona, and had three children, of whom Quanah was the first, born around 1845. As an adult, Cynthia Ann was recaptured by the Texas Rangers and forcibly returned to white society.

Quanah never saw his mother again. He was haunted by loss and by resentment toward Anglo Texans. Yet he was also adept at building relationships with them.

For years under Quanah Parker’s leadership, in the 1860s and 1870s, the Quahada Comanche held their territory against increasing force. But after unrelenting pressure from the US Army, they were removed to the Kiowa-Comanche reservation in Oklahoma in the mid-1870s. 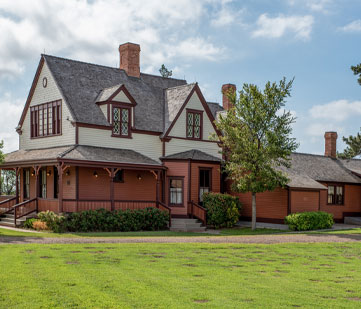 On the reservation, Parker continued his leadership, unifying the different Comanche groups and encouraging their cultural traditions while also incorporating Anglo forms of schooling and agriculture. Parker made deals with white ranchers who leased Comanche lands for their cattle to graze, and he negotiated other business dealings with white investors.

In 2011, residents living in the former Comanchería established the Quanah Parker Trail to interpret the Indigenous history of the region in the days before and during colonial settlement. The enormous arrows that mark the trail sites were made by regional sculptor Charles Smith (1942-2018), who lived near Lubbock.

The Quanah Parker Trail is already beginning to have an impact on economic development efforts in the Panhandle, but additional visitation is encouraged. Before hitting the road, visit the trail's website to learn more about the region’s communities and their cultural attractions. The following represent merely a sampling of the dozens of participating cities.

Charles Goodnight and his business partner John Adair established the JA Ranch, the first cattle ranch in the Texas panhandle, in 1877 in the Palo Duro Canyon area. In 1887, Goodnight established the Goodnight-Thayer Cattle Company in present Armstrong County and built a spacious Victorian-style two-story ranch house. The Goodnight home is restored on its original site and features a 268-square-foot second-floor sleeping porch with spectacular views of the countryside and the nearby bison herd that are actual descendants of the animals raised by Charles and Mary Ann Goodnight. 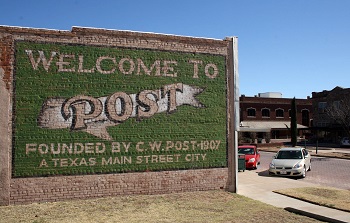 The Charles and Mary Ann Goodnight Ranch State Historic Site includes the J. Evetts Haley Visitor and Education Center, which offers exhibits about the Goodnights, bison, and the settlement of the area. A Quanah Parker Trail giant arrow marker on the grounds commemorates the friendship between Charles Goodnight and Quanah Parker.

This Texas Main Street city southeast of Lubbock was named for cereal magnate C.W. Post, who established the town as a model farming community in 1907. A statue and several THC historical markers grace the entryway to the downtown 1923 Garza County Courthouse. A few blocks away lies the Garza County Historical Museum, featuring a Quanah Parker Trail arrow in the side yard of the former sanitarium. Inside, several exhibits showcase Comanche artifacts, clothing, and artwork. 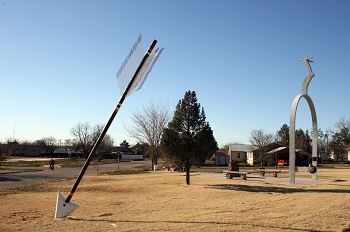 In the town of Spur, visitors can stop into the Spur-Dickens County Museum. The town boasts a unique western heritage which is showcased in this downtown museum, including Native American artifacts, railroad history, the story of a turn-of-the-century pioneer town, and ongoing change throughout modern times. A headdress reportedly belonging to Parker is displayed at the museum.

The site of the first arrow-planting ceremony, Matador has strong ties to Parker’s legacy, notably as his destination for several of his visits in the early 1900s. The Motley County Historical Museum features an impressive collection of historic photos documenting these appearances, along with exhibits dedicated to local Native American legacies and a scale model of downtown from this time period. The Quanah Parker Trail arrow is placed on the grounds of Matador’s 1891 Motley County Jail, which boasts a THC historical marker. 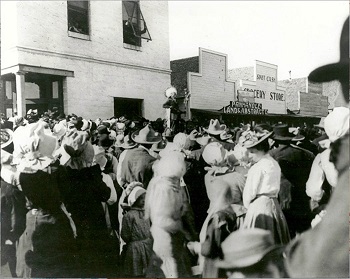 On the far eastern edge of the Plains Trail Region is the town of Quanah, named in honor of the Comanche chief. Parker’s partnership in the Quanah, Acme and Pacific Railroad was an important regional business venture, and he visited the town often from his nearby home in southwestern Oklahoma. Parker’s legacy is on display at the Quanah, Acme and Pacific Railroad Museum, and a nearby arrow draws visitors to the well-preserved historic Main Street district. An impressive 1938 mural titled “The Naming of Quanah” is in the lobby of the Quanah Post Office, and a granite monument pays tribute to Parker on the downtown square, anchored by the 1908 Beaux Arts style Hardeman County Courthouse, restored through the THC’s Texas Historic Courthouse Preservation Program.

For information about other heritage tourism opportunities in the Panhandle region, visit texastimetravel.com.