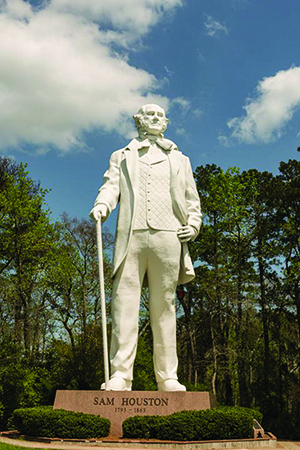 Texans and visitors to our great state have long shared a fascination with the story of Texas’ independence from Mexico. It’s chock-full of larger-than-life historical figures, intense political and military conflicts, and amazing stories of ordinary people experiencing extraordinary things.

These iconic images share a backdrop of Texas rapidly progressing through its third national flag (the Republic of Mexico) to its fourth: the Republic of Texas. It’s no coincidence that the symbolism of that flag followed Texas to its next national banner as part of the U.S. Although Texans celebrate epic battles—the tragedy and exuberance—of the Alamo, Goliad, and San Jacinto, a handful of minor battle sites remain mostly obscure.

The story of Gonzales and the Come and Take It cannon is among the most popular of independence lore. However, many visitors to Gonzales miss the handsome monument southwest of town that marks the battle site near the hamlet of Cost. This beautiful “first shot” commemorative monolith was dedicated by Gov. James Allred in 1935. A couple of skirmish sites related to the Goliad campaign also merit attention among the lesser-known battlegrounds. One of them is the Battle of Refugio, where some of the troops with James Fannin’s Goliad campaign were captured while evacuating colonists before the Mexican army’s arrival. Several historical markers and sites in the town of Refugio commemorate this campaign, including King’s Park—named for Texian officer Amon King—located across the street from the Refugio County Courthouse. 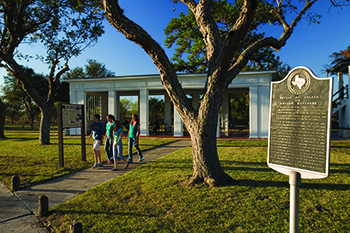 FANNIN AND FELIPE
Surprisingly, despite its easy access from US 59, the Texas Historical Commission’s (THC) Fannin Battleground State Historic Site is often neglected by visitors making their way to Presidio La Bahía for the Goliad story. The battleground marks the location where Fannin and his men fought valiantly after being caught on an open prairie and were forced to surrender during a retreat toward Victoria.

San Felipe de Austin State Historic Site, the THC’s recently improved historic site with a new visitors center and multimedia exhibits, is located near the site of the Runaway Scrape skirmish known as the Battle of the Brazos. The Texian militia under Capt. Moseley Baker evacuated the citizens of San Felipe de Austin, burned the town as part of a scorched-earth campaign, and held the Brazos River crossing when Santa Anna’s advance forces arrived in early April.

While all Texas historic sites pale in comparison to the Alamo, which has transcended mere historic battle site, the other Spanish missions in San Antonio played a small role in the 1835 Siege of Bexar by which Texians captured and occupied the city. Notably, Mission Concepción was the scene of a battle in which Jim Bowie and James Fannin commanded a force that drove the Mexican army back into town by launching a counterattack on the enemy. 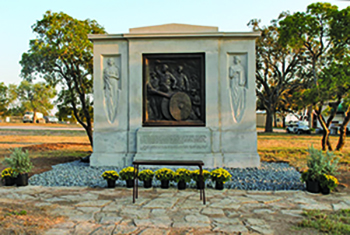 OFF THE BEATEN PATH
In southern Brazoria County, committed travelers can chase down two Stephen F. Austin-associated sites. On the northern outskirts of West Columbia just off SH 36, a sign and marker note the site of Austin’s death. George McKinstry, an original San Felipe colonist, settled in Austin’s Colony and hosted Austin while the latter served as the first Secretary of State to the Republic of Texas. The Father of Texas fell ill in December 1836 and died in the waning days of that historic year.

Further south in the town of Jones Creek, visitors can stop by Austin’s original burial site at the Gulf Prairie Presbyterian Church cemetery. Austin’s gravesite is marked inside the small courtyard cemetery that stands near where his sister’s family established Peach Point Plantation.

Two THC sites that aren’t always connected to the independence story have great rewards for the visitors who seek them out. Casa Navarro State Historic Site in San Antonio is the home of Tejano patriot and Declaration of Independence signer José Antonio Navarro. Varner-Hogg Plantation State Historic Site in West Columbia is connected to early settlement and the Texas Revolution through the Patton family’s occupation of the site after Martin Varner, an Old Three Hundred pioneer with Austin’s Colony.

LARGER THAN LIFE
Twenty early Texian leaders were commemorated with bronze statues during the Texas Centennial celebration of 1936. These statues are grand in scale and imagery.

Ben Milam, one of the heroes of the Siege of Bexar who gave his life in that battle, is commemorated with one of the Centennial bronzes in Milam Park. Incidentally, Milam is the only early Texan to receive the honor of two statues (his second is on the grounds of the Milam County Courthouse in Cameron). Not far from Milam’s statue is the Moses Austin bronze—the only Centennial statue to commemorate someone who never actually lived in Texas. Regardless, Austin’s sales pitch for immigration to Spanish Texas charted a course his son Stephen would follow after Mexican independence.

It’s difficult to address larger-than-life historical items without mentioning the world’s largest Bowie knife, a massive sculpture in Bowie between Fort Worth and Wichita Falls on SH 81. And rest assured, you’re not the first one to think of that pose to impress your social media followers.

The circa 70-foot tall statues of Sam Houston (near Huntsville on I-45) and Stephen F. Austin (just outside Angleton on SH 288) should be added to any Texas history bucket list when sheer size is in play. Many travelers are surprised to learn that there are visitors centers at the base of each of these giants, created by modernist sculptor David Adickes.