The Sam Rayburn House State Historic Site will host a reception on Saturday, February 10 from 11 a.m. to 3 p.m. in honor of the African American men, women, and children who lived and worked on the Rayburn farm. Join us for free, themed tours of the historic house, refreshments, and a display of objects from our collection in honor of Black History Month.

Though the collection of objects at the Sam Rayburn House includes over 5,000 artifacts ranging from albums to zippers, very few of those objects belonged to people employed by the Rayburns. Workers on the Rayburn property were seasonal farm hands who helped plant and harvest crops, brand and sort cattle, scrub laundry, cook,, and clean. While remnants of their lives and documentation of their time at the Rayburn farm is limited, their lives intersected with Sam Rayburn and the Rayburn family. 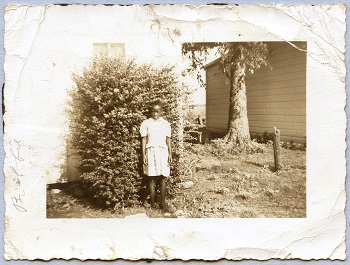 One object from our collection is a memento from the employees of the Rayburn farm. The small black and white photo shows an image of a young girl, about 10 years old. Her brow is slightly furrowed as she looks toward the photographer and into the sun. She wears a dress with a pale print and classic Mary Jane shoes. Behind her is a large shrub and a white board structure. To the right of the girl is a tree and another structure with white siding. Between the girl and the structure to the right in the background is a field of white cotton, nearly ready for harvesting.

The girl in the photograph is Mrs. Barbara Jean Ross. But back in 1947 when this photo was taken she was Barbara Jean Ganther. Her photo was taken on the Rayburn farm when she was 10 years old. The structure directly behind her, known as the caretaker’s cottage, was where she lived with her grandmother, Bobbie Phillips, and step-grandfather, Charlie Phillips.

Bobbie Erskine went to work as the Rayburn’s cook around 1933. She prepared the daily meals for the family, but also helped with housekeeping, gardening, and serving when the Rayburns had visitors. Charlie Phillips was hired by the Rayburn family as their home’s caretaker in 1939. He assisted with working in the fields with the crops of corn, cotton, oats, and sorghum, but also milked the Jersey cattle, weighed cotton during the harvest, and assisted with household duties.

Charlie and Bobbie married in 1940 and settled into the caretaker’s cottage at the Rayburn farm. Bobbie’s granddaughter, Barbara Ganther, came to live with the couple in 1942 when she was 5 years old. She quickly developed a close relationship with “Mr. Sam” and his sister Lucinda Rayburn, who also lived on the farm. Barbara occasionally helped her grandmother with her job duties. She helped dust the house, wash and iron laundry, collect eggs from the chicken coop, and keep the chickens out of the garden and flowerbeds. She even went to the store with Lucinda to help with her shopping. Barbara earned money by picking cotton on the farm. She used the income to purchase new school clothes.

In an oral history with Mrs. Ross in 2016, she recalled one of her favorite memories of her time on the Rayburn farm: being driven to school by Sam Rayburn in his 1947 Cadillac Fleetwood, the same car the former Speaker of the House received from 142 U.S. Congressmen. Rayburn would drive her to the segregated Booker T. Washington School in Bonham, where the other children would stand in awe of the shiny black limousine.

Around 1948, three more family members came to live in the caretaker’s cottage with Bobbie, Charlie, and Barbara: Bobbie’s daughter Emma Belle Merrell and her two children, Minnie and Joe.

Around 1950, the six family members moved into their own home in Bonham, which was purchased for them by Sam Rayburn. Bobbie continued working for the Rayburn family until her death in 1956. Barbara’s aunt Emma Belle went to work as the Rayburn’s cook after her grandmother’s death. Barbara recalled seeing “Mr. Sam” around town occasionally, but didn’t visit much after her grandmother’s passing. 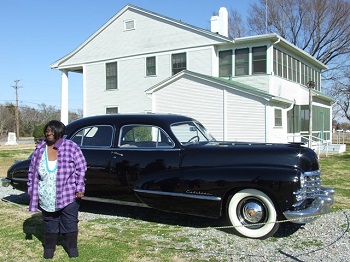 Today, Barbara lives in Bonham. She and her family recently visited the Rayburn house, where she admired Mr. Sam’s Cadillac and recalled riding in it to school almost 70 years earlier.

The small, black and white photo of Barbara will be on display during February, and will be exhibited during the Black History Month Open House on Saturday, February 10. Make plans to join us.

The Sam Rayburn House State Historic Site tells the real story of Sam Rayburn, one of the most powerful and influential politicians of the 20th century, in his authentic 1916 home.  Preserved as a period time capsule, the two-story home contains all original Rayburn furnishings. The Sam Rayburn House State Historic Site is one of 22 historic destinations operated by the Texas Historical Commission. For more information, visit www.visitsamrayburnhouse.com.