Tom Rayburn probably had a lot going on in October. He had a farm to manage, cattle to tend to, baseball to keep track of, and maybe some last-minute campaigning for his brother Sam. Minnie Eldridge also had a busy October.

She lived in the Rayburn home from 1927–1937, having moved in after the death of her cousin Martha Rayburn (Tom’s mother), and she worked as a home demonstration agent. During October, Tom and Minnie both had responsibilities to the Fannin County Fair in addition to the goals they set for themselves with teaching men and women better farming practices. This October, let’s look back on the things Tom and Minnie did for themselves and the people of Fannin County. 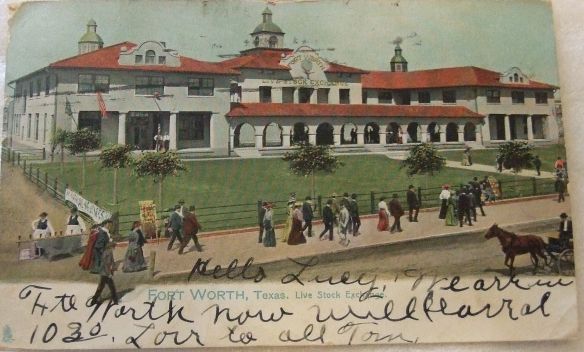 Before he became the manager of the Rayburn farm, Tom was a semi-pro baseball player. In 1908, he and the Bonham Elks played some games against the Sherman Athletics. The Daily Favorite wrote of Tom, “Rayburn has been pitching for some fast independent teams in South Texas and has had a successful season.

He is not only a good pitcher but a heavy hitter as well. ”One year later, Tom signed a contract with Newport in the Arkansas State League before transferring to the Jonesboro Zebras, where he was “regarded as one of the best pitchers in that league, and has won to date about seventy-five percent of his games.”

His team ended up winning the pennant. Bonham created the Bonham Hustlers in July 1909, with local and out-of-state players. He moved around quite a bit playing for different teams, and he wasn’t always the pitcher. He played first base for the Sherman Cubs in 1912. 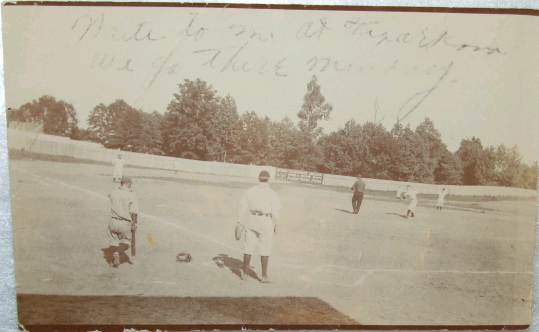 Wherever he played, Tom managed to send updates to his sister, Lucinda. Our site has postcards from Tom to “Lucy” during 1907 to 1909 from Terrell and Forth Worth, as well as Jonesboro and Pine Bluff, Arkansas. Tom informed Lucinda of his travels, his health, the beauty of the buildings in Terrell, and hoped she was doing well.

In 1914, the year that he purchased the 121 acres that he and his brother Sam would share, Tom placed an advertisement in the newspaper for “stock to pasture.” By the next year, he was selling hay and Jersey cows. The love of the game, however, never left him because he attended meetings of the Texas-Oklahoma League in 1921.

He was firmly entrenched into farm life by 1924, when he became a director of the Fannin County Pure Bred Live Stock and Poultry Association and put in charge of the cattle exhibition at its livestock show in October and November. The next year, he ascended to the position of assistant secretary-treasurer, and he and his brother Sam were directors.

Minnie Eldridge, called “Miss Minnie” by the women she came to know, became an important member of the community during her first year in Bonham in 1927. Working as the first home demonstration agent for the county meant that she was part of a service that began in Texas during 1912.

Originally focused on teaching girls in rural communities life and social skills, the Smith-Lever Act of 1914 provided the program with federal backing. The Texas Agricultural Extension Service greatly expanded the program. Agents taught farm girls how to garden, raise livestock, make and preserve their food, and perform other household duties. (More information about home demonstration can be found on the Handbook of Texas Online.) 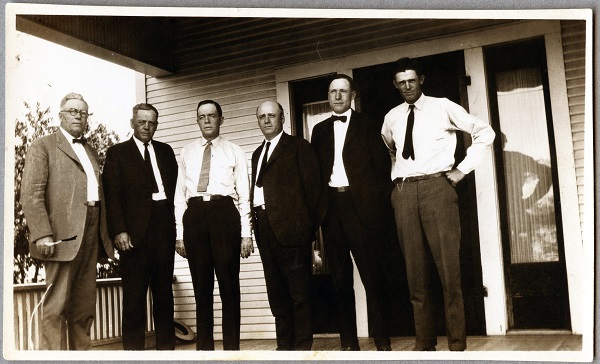 Minnie was a member of a state organization that provided valuable services to the people of Fannin County, especially with the Great Depression soon to affect the world. She had to have many skills in order to teach people a variety of practical and social skills.

Examples of her work included demonstrating sub-irrigation with county agent R.E. Carswell at Tom Rayburn (and Minnie’s) home, and attending home demonstration club meetings where she critiqued the member’s work. When Minnie returned to Bonham in 1975 (she left town in 1937 after marrying Glenn McTeer) for the opening of what is now the Sam Rayburn House State Historic Site, she was welcomed by 106 friends and former students at a reception thrown by the Fannin County Home Demonstration Club Council. Minnie said that at the time she left Fannin County in 1937, she had started 42 clubs.

While Tom served as the superintendent of the Cattle Department at the fair, several bulls and cows owned by the Rayburn Bros. (Tom and his brothers) farm won prizes. Tom was also on the dairy committee, which sent Jersey cows for an exhibit at the Texas State Fair in 1928.

Minnie and Tom exemplified the service orientation of their family at a local level. Although she only lived in Fannin County for about 10 years, Minnie likely helped hundreds of local women learn how to take care of themselves and their families during the Great Depression. Tom helped implement Depression-era farm programs. They both organized Fannin County fairs, an annual event displaying the best products Fannin County residents had to offer. 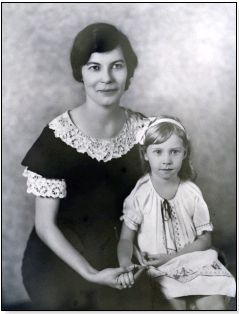 What will you be doing this October? Maybe you’ll add Tom to the list of Fannin County baseball players you keep in your head. Maybe you’ll learn how to make the most with what you have as Minnie taught people how to do.

Maybe you’ll care for your very real farm and farm animals, or maybe you’ll show off your goods to the townsfolk in that farming-simulation video game you’ve been playing. Or, if you’re in the area from October 6–9, maybe you’ll attend the Fannin County Fair. Whatever you decide to do, the Sam Rayburn House Historic Site will be here to show you how the Rayburn family spent their time all year long.

Aside: I learned something about language while discovering Tom Rayburn’s exploits. Newspapers were the social media of Tom’s day—there are several newspaper reports about him and some others going hunting as well as the results of the trip. (Tom never seemed to hunt a buck as well as the others on the trip.)

One such newspaper story from the Bonham Herald called the men on the hunt “mighty nimrods.” I assumed the author of the story was being sarcastic and insulting the men in a weird way, as I associate the word “nimrod” with stupidity or idiocy. However, the word “nimrod” comes from Nimrod of the Bible, who was a great hunter.

The word is slang for stupidity due to, depending on what you read and want to believe, two very different reasons. According to Merriam-Webster, research ties Nimrod to the building of the Tower of Babel, which evoked the wrath of the Lord and therefor associated his name with bad ideas.

Others say that Looney Toons cartoons, specifically those with Bugs Bunny and Elmer Fudd, gave the word “nimrod” connotations with stupidity because Bugs called Elmer a “nimrod” (great hunter) sarcastically. I don’t know whether my initial assumption about “mighty nimrods” was right or wrong after learning all of this, but I still find it funny.