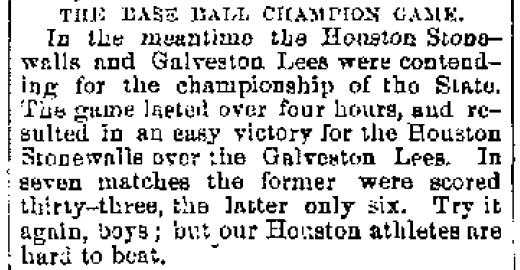 The San Jacinto Battleground might be best known as the site of the final battle of the Texas Revolution, but that’s not the only victory that has taken place here.

On San Jacinto Day in 1868, the Battleground was the site of one of the first official baseball games in Texas.

Organized baseball in Houston traces its roots back to April 1861, when the Houston Base Ball Club was formed. The players set up a practice schedule, meeting at 5 a.m. every Monday, Wednesday, and Friday, but Texas’ involvement in the Civil War interrupted their season before the first real game could be played.

It wasn’t until April 21, 1868 that the team, now renamed the Houston Stonewalls, faced off against the Galveston Robert E. Lees for their first official game. The two teams met at the San Jacinto Battleground, which was still private property at that point, as part of that year’s San Jacinto Day celebrations.

A crowd of over a thousand spectators, including several veterans of the Battle of San Jacinto, came out to watch the Stonewalls trounce the Lees. The game lasted four hours, and the Lees admitted defeat at the bottom of the eighth, losing 33 to 6.

Even though the Texas League, the state’s first professional baseball league, wasn’t formed until 1888, the game was still called the Texas State Championship.

The game was reported in the Houston Post, and the article ended with the line: Try it again boys; but our Houston athletes are hard to beat.